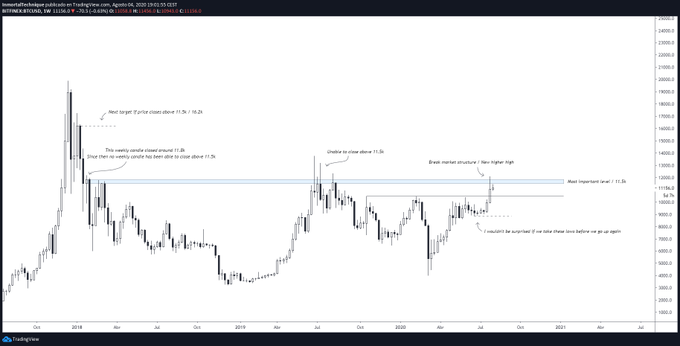 Why $11,500 Is Pivotal to the Bitcoin Bull Case: Analyst Explains

Although Bitcoin’s price action may seem to be sporadic to most market observers, the cryptocurrency can be technically analyzed like any other asset. That means that BTC has uptrends and downtrends and crucial support and resistance levels.

According to one analyst, $11,500 is literally the “most important level for Bitcoin” right now. It breaking above that level on a weekly scale could trigger a bull run while it remaining below it could lead to a correction.

The reason why he has put such emphasis on $11,500 is due to Bitcoin’s previous interactions with this level. The trader shared the chart below, which depicts these interactions.

As can be seen in the chart below, BTC has almost seen volatility when it has interacted with $11,500. Since early 2018, when BTC closed a weekly candle around $11,800, no weekly candle has closed above $11,500 despite Bitcoin passing that level intra-week.

The most important case of this was in June 2019, when BTC rallied as high as $14,000 in the middle of the week. On a weekly time frame, though, Bitcoin only reached as high as $11,500, again cementing its importance.

He isn’t the first one to have put such emphasis on $11,500 — or at least the prices in that region. Vinny Lingham, the chief executive of crypto startup Civic, recently wrote as reported previously:

“It was a good call last time. This time it’s likely that Bitcoin holds $12k and consolidates around that level while capital moves into alt coins to test those waters. If $12k holds for a 3-5 days, then we can expect the next phase to be a buildup for a much bigger run…”

Will BTC Cross It?

Analysts are hopeful that Bitcoin will cross that level in the weeks and months ahead.

Further supporting BTC bulls, gold just hit a price of $2,020. Certain analysts say that the precious metal rallying will act as a boon for the cryptocurrency markets moving forward.