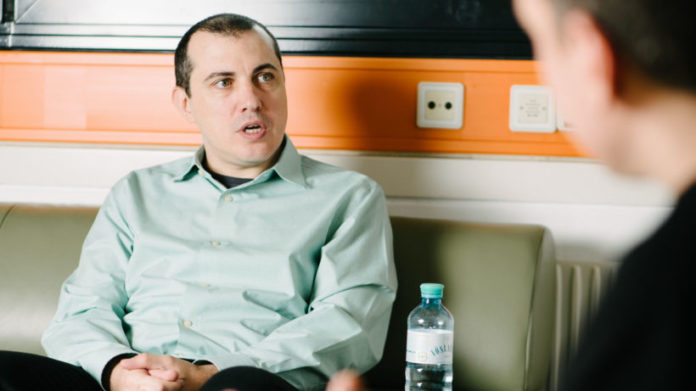 #HODL, #BUIDL, #SPEDN: Matthias Tarasiewicz and Daniel Pichler from the RIAT Institute for Future Cryptoeonomics spoke with the well-known “Bitcoin Evangelist” and author Andreas Antonopoulos at the WeAreDevelopers World Congress in Vienna about anonymity, privacy and the changed mood in the crypto sphere. Interview in the OT can be read here.

The origin of Cypherpunk lies in the origins of the Internet, a term coined in the late 1980s. An ideology that dealt with the young Andreas Antonopoulos right away. “I was fascinated by the application of cryptography to the social sciences and their influence on political movements,” he says. Fifteen years later, the whitepaper by Satoshi Nakamoto appeared on the Internet, which Antonopoulos initially ignored, but by chance and after a while rediscovered and realized what this whitepaper really meant. “I realized that Bitcoin was a very powerful and distributed distributed system with a cryptography-based security foundation, and indeed the whole construct included all those Cypherpunk ideals that I firmly believed in,” says Antonopoulos.

Since then a lot has changed, especially the actors in the crypt world and how they interact with each other.

Many people have joined the whole room in recent years and thus moved into the mainstream, which according to Antonopoulos led to a dilution of the basic principles in the crypto world. “People forget why Bitcoin was ever created. But that’s fine, because one of the interesting things is that in many previous technologies new people come in who do not understand the original principles, do not know about them, or even believe them. They are changing technology to meet their new interests. ”

Bitcoin, the blockchain and cryptocurrencies do not just have one use case. A majority of users do not even know the ideals and ideas of decentralization and empowerment behind Bitcoin. It is important to point to the culture of open source and the diversity of attitudes and diversity of interests that extend into the blockchain space, says Antonopoulos. “It’s always about the choice. […] You will not be able to bring your app to Facebook unless it reaches a very, very large market. It is not an open system, and totally centralized. The beauty of cryptocurrencies and open platforms is that the market you need to run an application can only consist of two people. You and the other person, and as long as you two are interested in writing an application and using Blockchain as a trust platform behind it, you can run your application. If no one else is interested in this application, it’s still running, it’s still getting the same priority on the network, it’s treated neutrally by the platform, and it can not be censored because Bitcoin is decentralized. ”

Blockchain not only has one use case of cryptocurrencies – and yet within cryptocurrencies there are different approaches to the payment aspect: Bitcoin is deflationary (there are a limited number of units), Forks from Bitcoin try to solve specific technical limitations differently, the example of Bitcoin Cash or the many other “chain forks”.

However, there is still a lot of discussion about whether Bitcoin does not meet the cash aspect, and alternative crypto currencies try to pick up on the limitations of Bitcoin. The arguments for this are, on the one hand, that Bitcoin is not anonymous, but pseudonymous, and that here are positioned so-called “privacy-focused coins” such as ZCash, Dash or Monero. Another problem is the ongoing discussions about the scaling of the Bitcoin network, as well as the rising transaction costs, which were mostly solved by SegWit and Lightning. Bitcoin as a cash substitute could have failed, Tarasiewicz said.

Do not have to solve all problems with a cryptocurrency

“What I use Bitcoin for is not what everyone else uses Bitcoin for, and that’s fine. I do not think we closed the door to using this technology as cash. To say it has to be one way or the other is presumptuous and I do not think we should try to predict how it will be used, “says Antonopoulos.

“I also take a broader view, namely that we do not have to solve all the problems with a cryptocurrency. In fact, I think if we have a future in which to send a cryptocurrency in milliseconds, for Milli-Satoshis values, and you can switch between one and the other cryptocurrency at near-zero cost and almost zero-time – why then only commit to a cryptocurrency? ”

Bitcoin has long been no longer anonymous, and does not meet more privacy aspects that should correspond to the Cypherpunk ideals, emphasizes Pichler.

Antonopoulos says that the application of privacy and anonymity will be essential for every blockchain. “If you have the freedom to trade with anyone, but all of your transactions are visible to everyone, you could be punished if you act with the wrong people, effectively freeing you from your freedom of action per se. We have to recognize that privacy is a fundamental human right […]. ”

The issue of privacy is hotly debated, especially since the entry into force of the DSGVO, and since the Facebook data protection process around Mark Zuckerberg has been widely followed in public. Bitcoin may have created a transparent society that could be problematic for end users and your privacy, Tarasiewicz points out.

Cash is not anonymous

Anonymous cash is currently not the status quo, but very supervised financial transactions, Antonopoulos says. This means that we are under constant totalitarian surveillance, not just for every one of our financial transactions, and not just one instance, because the intelligence services share information with each other, says Antonopoulos. “European intelligence agencies are forbidden to spy on Europeans, so leave it up to Americans, Americans are forbidden to spy on Americans, so outsource it to Europeans,” Antonopoulos emphasizes.

Antonopoulos here dystopically outlines the role of power apparatuses: “Your rights are meaningless. Rights are like muscles, you train them or they wither away. And you do not ask for rights, you take them, and if you have to, you attack them by force. I would prefer to seize them with the power of cryptography, and if you recognize that your society is abolishing your fundamental human rights, repair your society, do not give up. ”

“In the end, societies have to get out of the comfort zone to discover that alternatives are needed. I’m interested in making sure these alternatives exist when people need them.

source and image by Riat