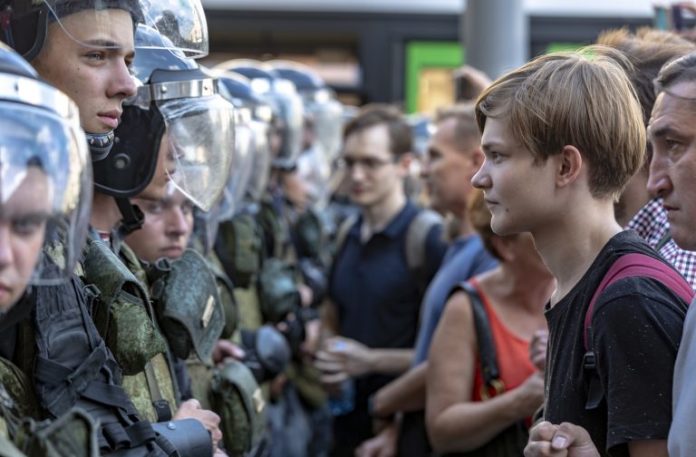 Last week in Russia, state agents tore apart the offices of FBK, a privately funded anti-corruption foundation, freezing group assets and more than 100 bank accounts. Officials are using suspicion of money laundering as justification for targeting the largely bitcoin-funded group, possibly in a bid to quell their hand in upsetting Moscow politics. This case and others, like raising donations or moving through airport security checks, demonstrates something bitcoiners have known for years: a math-based money that exists on the blockchain cannot be confiscated.

Alexey Navalny’s Moscow-based Anti-Corruption Foundation, known as FBK, is a perpetual thorn in the side of prevailing political powers in Russia, receiving significant funding in bitcoin and converting it to Russian rubles via a cash-in exchange service. According to Russian officials, the group has potentially laundered 75 million rubles (over 1 million USD) and in effect 100 bank accounts have been frozen, totaling assets worth $430,360, according to Russian media outlet Meduza.io.

FBK campaign chief Leonid Volkov maintains there is nothing illegal about their funding process, and that authorities there are only trying to intimidate dissenters. FBK’s press secretary Kirya Yarmysh states:

This case is fabricated from beginning to end, and its only goal is to scare people and stop the FBK’s activities.

These activities include a new “Smart Voting” project which offers voting tips for those interested in opposing United Russia, the ruling party in the country. FBK’s website is currently blocked as well. The group has become especially important now to Russia’s opposition supporters, as opposition candidates have been barred from participation in Moscow’s upcoming municipal elections, resulting in nationwide protests, some of which are aimed more broadly at Putin’s regime as well.

You Can’t Confiscate an Idea

Posting a picture of their government-demolished safe to Twitter on August 8, Yarmysh quipped “Look how hard they tried! They were probably expecting to find that mythical billion, no less. Shame that the safe failed them again.” This “mythical billion” is in reference to the original laundering suspicion amount, which the government then changed to 75 million, later.

On top of the search of FBK headquarters, several members’ private homes were reportedly searched as well, and some were allegedly injured in the process. According to FBK attorney Alexander Pomazuyev’s legal representation, Pomazuyev’s face was slammed against the floor by police. These tactics are brutal, but what remains interesting about FBK’s crypto funding is that no matter how violent somebody gets, it doesn’t matter to the math. Applications here extend all over, even outside the volatile climate in Russia, including taking one’s business off the ground and into the sky.

FBK’s government-disappointing safes are not the only use case for math-based, computer money. Crypto facilitates uninterrupted business in the air as well. Airports worldwide have limits as to how much cash and assets travelers can legally move through their security checkpoints. Though the limit is typically set to $10,000, crypto assets present a way to fly around these humiliating impositions. One simple printout of a paper wallet, a quick transaction to load it up, and a traveler is good to go, carrying however much they please. At least, for now. Mobile wallets and other hardware also afford this option, but governments are already starting to crack down, searching phones and laptops via random checks and also where there is alleged suspicion of illegal activity. In recent documentation, the U.S. Departments of Homeland Security (DHS) and Customs and Border Protection (CBP) verify this Orwellian reality:

CBP’s search authority extends to all persons and merchandise, including
electronic devices, crossing our nation’s borders.

A paper wallet stashed in a suitcase, however, is nothing more than a piece of paper. A Bitcoin transaction to another address or device awaiting one’s arrival overseas, is nothing but numbers in the air. A random string of words for a seed, jotted down on a memo pad, is just “meaningless” words. FBK’s case and others are the very reason U.S. Congressman Patrick McHenry was right when he testified to lawmakers on July 17 that “The world that Satoshi Nakamoto, author of the Bitcoin whitepaper envisioned, and others are building, is an unstoppable force.”

Projects like Airdrop Venezuela, the Dementia Society of America’s crypto write-offs, and numerous grassroots, decentralized initiatives on social media to help with natural disaster relief display the real utility of permissionless giving. For example, in August, 2017, over $50,000 was raised in crypto donations to bring aid to Texas hurricane victims. None of this is to mention the untold number of smaller P2P, grassroots initiatives that fly under the radar, happening via small, community-based online calls for action.

Restoring and fostering donor faith comes down to one simple word: transparency.

Transparency is important when large and reputable charities like the American Cancer Society have been reported as spending just 24% of their money on research, and large amounts on executive salaries. With crypto there’s no need for “watchdog organizations,” per se, as long as there’s a decentralized blockchain, guaranteeing that no third party can stand in the way of financial aid being delivered and confirmed. The State’s Only Tool

As evidenced last week in Russia, crypto as an idea cannot be stopped, but governments are still going to try. The picture of the busted up FBK safe is a good metaphor for the one go-to tool of government: the application of force. FBK may be correct in asserting that the money laundering accusations are merely a tool to justify the infiltration and destruction of the muckraking organization. Where there’s no transparency, government entities like this can operate with virtual carte blanche by fabricating bogus charges easily. The conversation in the U.S. crypto space is similar, with regulated exchange on-ramps and taxes being now cited as chokepoints by which the government can stifle crypto fluidity. Bitcoin’s success ultimately relies fully on people’s willingness to use it according to its full function, regardless.

What do you think about FBK’s situation and the utility of crypto? Let us know in the comments section below.