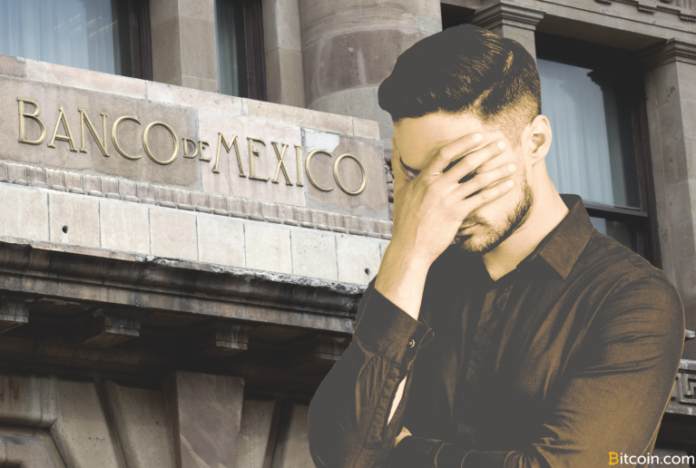 The long-awaited rules on crypto assets recently published by the central bank of Mexico have caused quite a stir. A local cryptocurrency exchange’s CEO explains to news.Bitcoin.com that “the impact goes beyond the crypto industry.” Calling it “a disaster,” he asserts that the people within the central bank “have really shown their ignorance” about cryptocurrency.

Much discussion has transpired after the Bank of Mexico (Banxico), the country’s central bank, published a circular detailing crypto-related provisions for the regulation of financial technology institutions (FTIs).

Sebastian Acosta Checa, CEO of local crypto exchange Isbit, shared with news.Bitcoin.com that the circular “says FTIs have to prevent consumers from being ‘exposed’ to the terrible ‘dangerous’ nature of virtual assets on the grounds of their ‘volatility’ and ‘complexity.’” Overall, noting that “In a way, it [Banxico’s circular] is preventing institutions from offering virtual assets to end consumers,” he remarked:

This is a disaster. The people within Banxico have really shown their ignorance about the subject they are trying to regulate. Mexico’s congress passed a law to regulate fintech companies in March last year, putting Banxico in charge of determining which cryptocurrencies would be authorized to offer to the public by regulated entities. At the time, the crypto community and stakeholders were hopeful that the central bank would introduce positive regulations to foster the fintech sector and the country’s economy as a whole.

However, when Banxico finally published the circular, it “essentially stipulated that they wouldn’t authorize any cryptocurrency to be offered by regulated financial companies,” Tomas Alvarez, CEO of local crypto exchange Volabit, recently told news.Bitcoin.com.

Restriction But Not Prohibition

Mexican crypto exchange Bitso described in a blog post that “the circular is directed at banks and fintech [companies] regarding their operations with cryptocurrencies.” The exchange noted that “Banxico mentions that it seeks to take advantage of the use of the technology of these cryptocurrencies as long as they are used for internal operations of financial institutions,” emphasizing:

This does not mean that operations with cryptocurrencies are prohibited. Alvarez calls it a catch-22 situation since the law requires crypto exchanges to become regulated financial institutions. “However, once you obtain this license you would not have the authorization to list any cryptocurrencies, making it legally impossible to operate an exchange in Mexico with the fintech law in place,” he noted.

Some of the rules Banxico imposes are not clear, however. Acosta Checa told news.Bitcoin.com:

Since the circular seems to have been written in a rush and without careful analysis and basic competence, it leaves to the interpretation of certain important things.

For example, in his interpretation, “financial institutions and foreign trade companies are not a ‘consumer’ and thus can operate freely” with his exchange. Isbit has already “shifted gears to serving businesses, corporations and institutions (which are allowed to hold virtual assets in their balance sheets according to the previous bill published March 9, 2018). Thus we will not shut down or lose our most valuable customers,” the CEO emphasized. Nonetheless, Acosta Checa understands that, under the new rules, if his exchange wants to “continue serving final ‘consumers/the public’ we will need to appeal to the Amparo Law and ask a court to suspend the application of the circular published by the Bank of Mexico (not the entire bill passed by the previous government administration on March 9, 2018).” He clarified:

According to the March 9th bill passed by the [Mexican] congress, we have permission to operate with ‘consumers’ till September.

The CEO of Isbit believes that the new crypto asset rules will negatively impact the country’s economy as a whole. He explained that “Mexico is the endpoint to the biggest remittance corridor in the world (second largest population of migrants), the 6th most visited country by tourists and [is the] country with the largest number of free trade agreements.” Therefore, the country “has a lot to gain from the industrial application of virtual assets (activos virtuales) to facilitating free trade, tourism and financial inclusion,” Acosta Checa detailed, concluding:

The impact goes beyond the crypto industry. I believe it damages the economy as a whole.

What do you think of the rules set by the central bank of Mexico? Let us know in the comments section below.

The post Bank of Mexico’s Attempt to Regulate Crypto ‘Is a Disaster,’ Exchange CEO Explains appeared first on Bitcoin News.