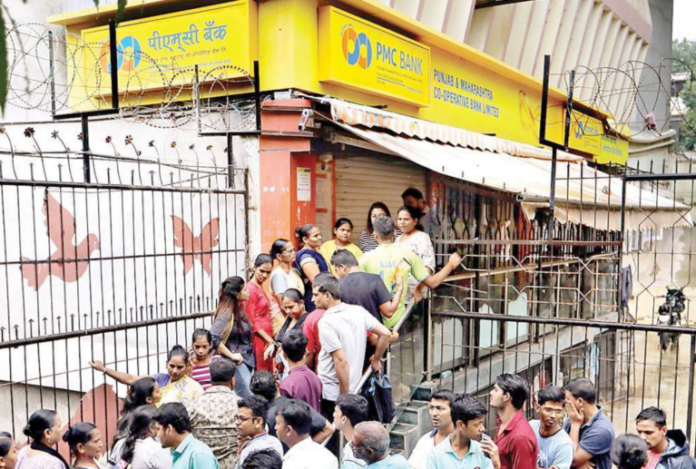 The crisis has elevated at the cooperative bank recently placed under regulatory restrictions by India’s central bank. Multiple branches have been raided and several arrests were made. However, the RBI continues to impose a withdrawal limit, preventing bank customers from accessing their savings. The bank has 137 branches across India.

Since the Reserve Bank of India (RBI) placed regulatory restrictions on Mumbai-based Punjab and Maharashtra Cooperative Bank (PMC Bank) Ltd., more events have transpired. Major developments have led to an alleged Rs 4,355 crore (~$615 million) bank fraud, raids, and the arrest of executives. PMC Bank is a major cooperative bank in India with 137 branches across multiple states and over Rs 11,000 crore in deposits, local media detailed.

Four people have been arrested by the Mumbai police in connection with the case so far. The latest in police custody is former PMC Bank chairman Waryam Singh, who was picked up on Saturday. The other three arrests were former PMC Bank managing director Joy Thomas and promoters of Mumbai-based Housing Development and Infrastructure Ltd. (HDIL) group Rakesh Wadhawan and his son, Sarang Wadhawan. According to information registered by the Mumbai police, HDIL group promoters colluded with the bank’s management to take out loans. When they were in default, bank officers allegedly used over 21,000 fictitious loan accounts to hide them, the police told the court Friday. The bank did not classify these loans as non-performing assets even when they were in default, hiding information from the RBI for over eight years.

Thomas reportedly wrote the central bank a confession letter detailing the scheme. He revealed that the bank’s exposure to HDIL group was around Rs 6,500 crore, which was over 73% of its total advances — all of which are in default.

The enforcement directorate (ED) raided six PMC Bank locations in and around Mumbai on Friday, local media reported. The ED said that the raids were conducted to gather evidence after a criminal complaint was filed under the Prevention of Money Laundering Act by the central agency. “Based on a complaint by an RBI-appointed administrator, the police complaint was filed earlier this week on charges of forgery, cheating and criminal conspiracy against the officials,” the Economic Times described. According to the initial investigation, the police said that the bank’s losses since 2008 amounted to Rs 4,355.46 crore. The RBI announced that it had placed restrictions on PMC Bank on Sept. 24, including limiting how much customers could withdraw for a period of six months. Originally, the withdrawal limit was only 1,000 rupees (approximately $14). However, after many protests, the RBI raised the limit to 10,000 rupees. Then, on Oct. 3, it increased the withdrawal limit for depositors of PMC Bank to 25,000 rupees of the total balance of their accounts, while other restrictions remain unchanged.

“The Reserve Bank of India again reviewed the bank’s liquidity position and, with a view to reducing the hardship of the depositors, has decided to further enhance the limit for withdrawal to ₹ 25000 (rupees twenty five thousand only),” the RBI explained. On Twitter, many users have been pleading with the RBI to allow them to withdraw the full amount of their hard-earned money. They also want the central bank to explain what will become of their deposits at the bank. One user wrote, “We need our entire money back … It’s our hard-earned money so … our right to it.” Another expressed, “RBI, you already know that increasing the limit is not helping anyone. This is pure hogwash.” Some claimed that they have had to shut down their businesses due to this limitation. Noting that people are literally begging the RBI to return their money, one user concluded:

It’s totally ridiculous that people are begging to get their own hard-earned money from [the] bank. It can happen to any bank.

Responding specifically to the new 25,000 rupee limit, one user exclaimed: “That’s not enough. We have all [our] savings in PMC Bank … Please release all our money.” Another user added, “Stop this nonsense of limit on our hard-earned money and let us take our all savings … without any limitations.”

Meanwhile, the central bank has issued a statement in an effort to calm the public: “RBI would like to assure the general public that [the] Indian banking system is safe and stable and there is no need to panic.”

The RBI has also placed banking restrictions on all regulated entities, prohibiting them from providing services to crypto businesses including exchanges. The ban went into effect in July last year and banks subsequently closed accounts of crypto exchanges, forcing some of them out of business.

The banking ban has also affected the Pune city police department when it tried to transfer INR converted from the sale of the cryptocurrencies seized from an alleged kingpin of a Ponzi scheme. Rs 8.42 crore (~$1.2 million) is reportedly sitting in a bank account belonging to the company that operated a local crypto exchange which closed down its trading operations due to the banking ban. According to the Times of India, the police has filed a plea with a session court to move the money into its account.

Following the RBI ban order, a number of industry stakeholders filed writ petitions with India’s supreme court to challenge the ban. The court started hearing the case in detail in August, but the case is still ongoing.

Images courtesy of Shutterstock, DNA India, and The Hindu.

Tether posted a press release on their website today saying that they’re expecting lawsuits based on research they call “Meritless...