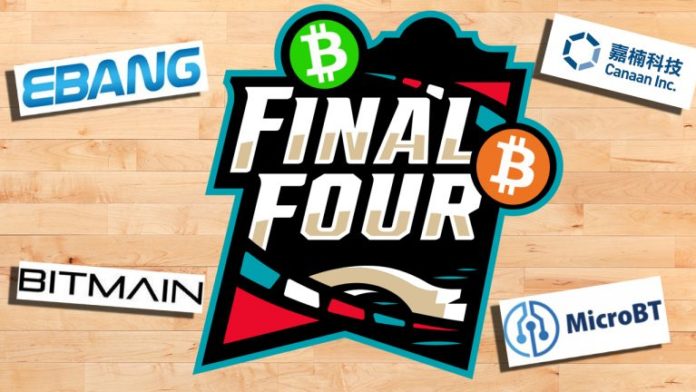 At the time of writing, there are at least 8-10 reputable mining rig manufacturers including Innosilicon, Strongu, Bitfury, and Pantech. However, the top dog mining rig manufacturers worldwide include the Chinese companies Bitmain, Microbt, Ebang, and Canaan. These four firms dominate the globe’s market share of SHA256 miners, as most mining operations leverage machines made by these companies.

Last year, the mining rig creators Canaan had an initial public offering and the company’s shares are now listed on Nasdaq. Ebang seems to be next in line to go IPO, and rumors stemming from regional reporters claim that Ebang will allegedly be listed on Nasdaq on June 26.

Despite the fact that Canaan and Ebang are U.S. IPO participants, Bitmain and Microbt dominate most of the mining rig market shares. The Bitmex researchers report called the “Battle For ASIC Supremacy,” shows that in 2017, 2018, and 2019 Bitmain controlled a majority of ASIC mining rig sales. Canaan in 2017 and 2018 came in a distant second, followed by Microbt and Ebang respectively.

The report notes that after assessing Microbt and Bitmain, Bitmex researchers have noticed Microbt is “gaining significant traction in the market, obtaining [a] share from Bitmain.” 2019 numbers show Microbt took the second place position, as far as market share is concerned, followed by Canaan and Ebang.

Unfortunately for Canaan, the IPO shares have lost over 70% since the IPO went public. Both Canaan and Ebang suffered serious net revenue losses as well in 2019, and both firms are under fire from class-action lawsuits. “At the height of Bitmain’s power during the 2017 bull market, its market share was around 75%,” explains the recent report.

Bitmex researchers stress that Bitmain appears to be “facing an almost comically abysmal corporate governance situation,” referring to the quarrel between Micree Zhan and Jihan Wu.

According to mining rig statistics at today’s exchange rates, the top three mining rigs are Bitmain manufactured. The third most profitable mining rig on June 22, is Microbt’s Whatminer M30S. Two more Bitmain-made Antiminers lead the pack and another Microbt rig, before Innosilicon and Ebang machines show profits. The top mining rig as far as profitability is concerned on the market today is the Bitmain Antminer S19 Pro (110TH/s).

Any machine that produces 50 terahash per second (TH/s) to 100TH/s is in the top ten profitability wise. Many of the machines that are not made by the top four mining manufacturers in China, are not profitable at today’s bitcoin (BTC) price per unit at a rate of $0.07 per kilowatt-hour (kWh). At $0.04 per kWh, a number of the older generation machines and rigs not made by the four top dogs, can rake in some profits using today’s BTC exchange rate.

Bitcoin mining manufactures and pool operations have failed in great numbers over the last five years with companies like Butterfly Labs, Mining ASIC Technologies, BTC Guild, and Cointerra. At that time, machines manufactured by those companies only processed 10-15TH/s.

The current next-gen machines created by Bitmain, Microbt, Canaan, and Ebang are in the 50TH/s to 100TH/s range. Bitmex researchers think that these machines will likely have a longer shelf life than the bitcoin mining rig predecessors of the past.

“The lifespan of ASIC mining machines is likely to extend considerably and the current generation of products may remain in operation for several years,” the report concludes.

What do you think about the four top mining rig manufactures current dominance? Let us know in the comments section below.

The Probability of Ethereum Seeing a Parabolic Rise in 2020 is 7%; Factors to Consider

Ethereum has been moving in close tandem with Bitcoin throughout the past several days and weeks, struggling to garner any...