There’s no doubt that the past 36 hours have provided for a tumultuous period across the board within the cryptocurrency sphere as the entire space has been littered a shade of crimson with numerous names violating short-term support levels and wreaking havoc in the process from a technical standpoint.

While we suspected that something was not right these past several days based on the action as well as the numerous names that we have recently profiled in these Technical reports displaying both vulnerable as well as slippery technical characteristics, the market has rendered its verdict via a harsh downdraft throughout the entire landscape leaving none unscathed.

With that said, a tremendous amount of technical damage has been inflicted and it will take time to repair the damage done. Let’s take a look at the Chart of Bitcoin (BTC) to see what may be in store moving forward. 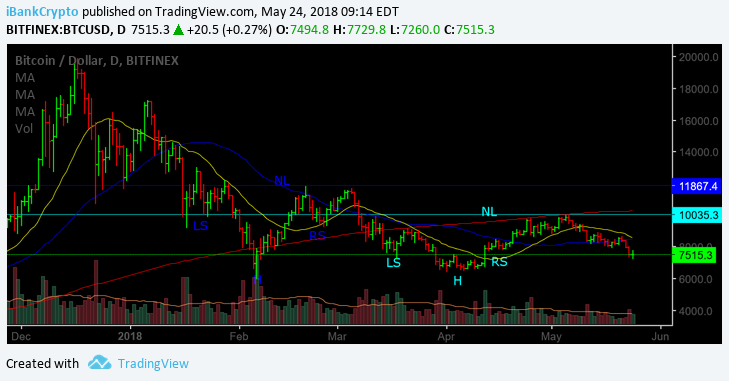 As we can observe above, Bitcoin (BTC) has officially failed with its second attempt out of an inverted H&S formation and in the process, has now breached both our previously noted 8200 as well as the 7800 potential short-term support levels.

In addition, we can also see that BTC now resides beneath all of its important moving averages (20/50/200), which from a technical perspective, remains in an unfavorable posture.

Moving forward, both investors/traders may want to pay particular attention to the following levels for further clues/evidence with respect to direction.

If, at any time in the days ahead, BTC is capable of recapturing both the 7800 as well as the 8200 levels, which were acting as potential support and will now serve as short-term resistance, such development/s, should they materialize, would be a start in repairing the technical damage inflicted.

On the flip-side of the coin, both the 7240 as well as the 6880 levels may offer/provide short-term support. Should both levels ‘give way’ at any point in the days/weeks ahead, the probability suggests that a re-test of the February low located at the 6K level is likely.

Needless to say, the entire cryptocurrency universe remains under pressure and while we fully suspect that both investors/traders will be treated to some relief in the days ahead, a tremendous amount of technical damage has been levied and will take time in order to repair.

For those trading this tape, be sure to keep things on a tight leash and to honor Your Stops. Risk management is both priority number one and paramount, as always!