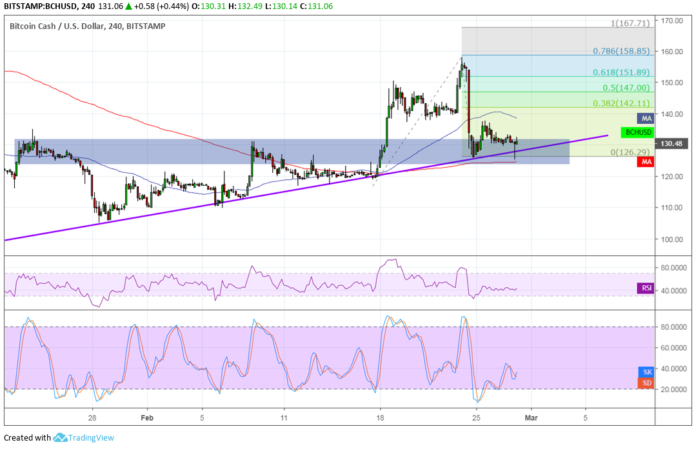 Bitcoin Cash looks ready to resume its uptrend as it bounces off the rising trend line connecting its recent lows and an area of interest. If this holds, price could gain bullish momentum until the targets marked by the Fib extension tool.

The 100 SMA is above the longer-term 200 SMA to suggest that the path of least resistance is to the upside. In other words, the uptrend is more likely to gain traction than to reverse. However, the faster moving average might be turning lower and narrowing the gap with the slower MA, signaling weakening bullish pressure. Still, the 200 SMA could keep holding as dynamic support as it lines up with the trend line and former resistance turned support.

RSI seems to be edging higher after recently pulling out of the oversold region. This suggests that buyers are returning but at a slow pace. Still, the oscillator has plenty of ground to cover before indicating overbought conditions, so buyers could stay in control for a bit longer.

Stochastic is also moving north so Bitcoin Cash might follow suit while buyers have the upper hand. This oscillator also has some room to climb before hitting the overbought zone.

Cryptocurrencies seem to have gotten another boost from positive remarks by founders of tech companies like Apple and Tesla. This fuels the optimism in the industry, which has previously been stoked by bullish price estimates and expectations for increased institutional inflows by next month.

Also, the ethereum hard fork appears to be going smoothly and without any major disruptions, keeping investors confident that more features will be available.