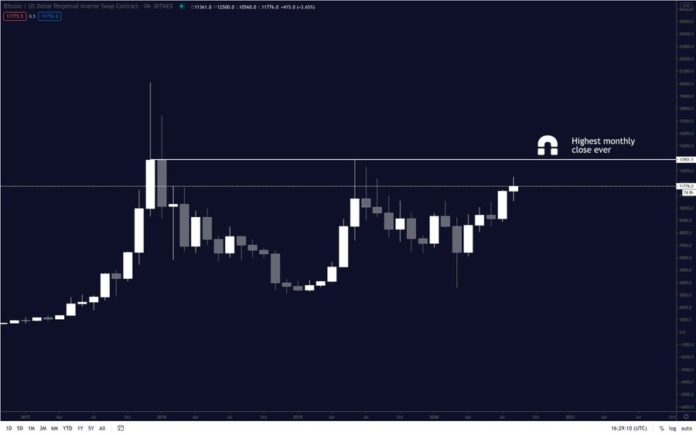 Bitcoin Is a Mere 17% Away From a New Monthly High: Analyst

Bitcoin is days away from closing its price candle for the month of August.

If Bitcoin closes at current price levels, it will mark the second highest monthly candle close ever, which is notable in its own right. But analysts are hoping that the asset moves higher in the coming week to mark its highest monthly close ever, above approximately $13,800.

Commenting on how Bitcoin needs to rally by “only” 17% to set a new monthly high, the head of technical analysis at Blockfyre said:

“#Bitcoin only needs a 17% pump this month to both have take out the 2019 highs, but also have it’s highest monthly close in history! We are so close fam! We are so incredibly close. Let’s finish the month on a bang!”

Analysts saying that Bitcoin closing above the monthly all-time high and the 2020 actual high will be notable for bulls.

They say it will confirm that Bitcoin is in a macro bull trend that will eventually take BTC above the actual all-time high at $20,000.

Bulls Are Already in Control

Bitcoin remains below the all-time highs on the monthly chart and daily chart, $13,800 and $20,000, respectively. Still, analysts are certain bulls are already in control of this market.

Raoul Pal, a former head of Goldman Sachs’ European hedge fund sales division, said earlier this year that he is more bullish on Bitcoin than ever before.

He cited both technicals and fundamentals to back his optimistic sentiment.

On the technical side of things, he noted that Bitcoin had broken above a pivotal pennant pattern that has restricted price action for three years. The length of this technical pattern suggests it can be assigned much importance.

On the fundamental side of things, Pal pointed out that Bitcoin is the only asset that managed to outpace the growth of the G4’s balance sheet. While historical returns don’t confirm an asset’s future trajectory, Pal thinks that this is a sign that Bitcoin is a store of value.

Mike McGlone, a senior commodity analyst at Bloomberg Intelligence, is also optimistic. He thinks that a number of macro trends, along with positive technicals and on-chain metrics, will drive upside in this nascent market.