Friday, Bitcoin (OTCQX:GBTC) pushed through its previous high near $5000 like there was no resistance. The digital currency spent a couple of days pushing up against that limit until a number of minor news items brought in a massive wave of buyers.

What was interesting was watching most of the rest of the crypto-market not respond alongside Bitcoin. Unlike in rallies past where Bitcoin’s success was a rising tide lifting all boats, yesterday saw continued selling in a many coins/tokens with bright futures.

In effect, we saw liquidity drain out of coins like NEO, Waves, Monero and STEEM and back into the big three, Bitcoin, Litecoin and Ethereum. This makes the argument pretty clear that some of these coins were way ahead of themselves.

They were the recipient of profit-taking out of the big three. Most of the money that moves into the crypto-space isn’t coming back out again because of uncertainty surrounding taxes. This is part of the reason why the ICO – Initial Coin Offering – market exploded this year.

All of these profits can’t be brought back to the ‘real world’ lest these newly-minted ‘Crypto-Millionaires’ get rapped with massive capital gains taxes, especially here in the U.S.

The I.R.S. classifies Bitcoin as ‘property’ and hence is taxed at the capital gains rate. If your cost basis is next to nothing, pulling that money out for any purchase bigger than your mortgage or car payment makes little sense if you think the correction in Bitcoin is a temporary one.

Hence, using that new capital to fund new projects as a form of tax shelter makes sense. So does booking profits in the ‘under-valued’ coins. And it doesn’t take a lot of this rotation to send some of these coins up by factors of five or ten.

But, once Bitcoin cleared the next technical hurdle those profits can then be rolled back out of these ‘alt-coins’ and back into Bitcoin to chase the momentum.

And that’s what happened yesterday. 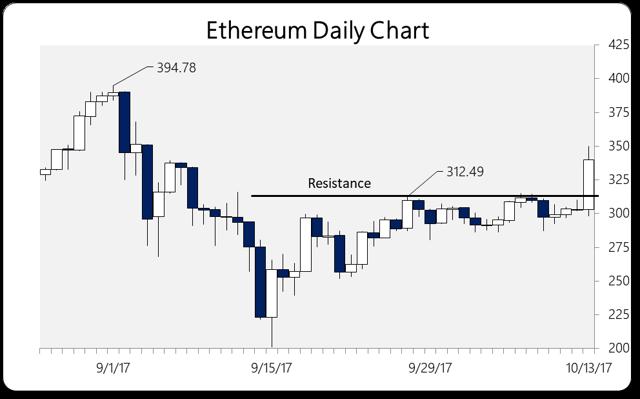 On the other hand, Ethereum languished below the technically significant level of $312 (See Chart) for a few extra days on fears of turmoil surrounding its upcoming upgrade to its blockchain, known as Byzantium.

Byzantium is a major upgrade to the Ethereum blockchain to radically improve transaction throughput. It is being weakly fought by the miner consortiums, unlike the bitter fight over Bitcoin’s fork in August which resulted in the creation of Bitcoin Cash.

But, with only a few days to go until Byzantium’s implementation, fears of a miner’s revolt and a split of the Ethereum blockchain are receding. Because of this, Ethereum finally broke through resistance at $311 last night and is now trading above $330 with its eye on the all-time high at $400.

And with Bitcoin spiking so far, so fast there will likely be another round of rotation into alt-coins in the coming days, including Ethereum. Byzantium’s network upgrade, if it goes smoothly which is expected, will likely take Ethereum up through its all-time high in the next few weeks.

Why? Because we’re still staring at another potential fork of the Bitcoin blockchain as miners continue to balk at adopting the ‘segregated witness’ protocol along with doubling the size of the block. This is known as ‘Segwit 2x’ and November 1 st is the day to watch there.

With Byzantium Ethereum begins the process of scaling its architecture to handle the volume of transactions its price currently commands. It has seen tremendous investment in the past year. There is still a lot more technical work to be done in the future, and I’m not going to bore you with the details.

Understand, for the layman, that cryptos like Ethereum are more akin to application platforms, APIs, than they are digital analogues of gold (GLD) or silver (SLV) like Bitcoin and Litecoin are.

And because of that their value is derived more on the applications built on them than as any form of medium of exchange. That function, the tokenization of its value, is a measure of their platform’s performance running distributed applications.

That’s why I find them so much more compelling than Bitcoin as an investment vehicle. They feel more like stocks than they do forex. Analyzing Bitcoin as a forex pair makes perfect sense. And in the crypto-world Bitcoin is like the U.S. dollar (UUP), that which everything else is measured against.

It is the crypto-world’s reserve currency. And as such, it sits at the bottom of its version of Exter’s Pyramid.

But, Ethereum, and coins like it, are fundamentally different. They have the potential to change the way we exchange value for value on the internet. And, as such, investors need to be aware of this before writing off the insane volatility as just another bubble.

That volatility is the result of billions of dollars flowing into a market in a short period of time. The short-term effect is bubble-like. But, beyond the speculative frenzy there is a real desire to change the way we handle money and investment.

And the now $174-billion-dollar market cap of the cryptocurrency market is a testament to the desire of people to begin building that new world. Not all of these ‘Platform Coins’ like Ethereum will be successful. As an investor I look at them the same way I look at any penny stock, as a sincere risk where I’m only putting money I’m willing to lose on the table.

But, with the current influx of real world capital the day where their malinvestment reveals itself is a long way away. People still believe Tesla’s (TSLA) story even though the company has never hit its production or cost targets. The same thing will exist in the crypto-space for the next couple of years.

And, as always, the market will separate what’s real and what’s fake. For now, Ethereum is the real deal.

Disclosure: I/we have no positions in any stocks mentioned, and no plans to initiate any positions within the next 72 hours.

Additional disclosure: I own Ethereum, Steem, Waves, Litecoin and Neo. I do not own any Bitcoin.