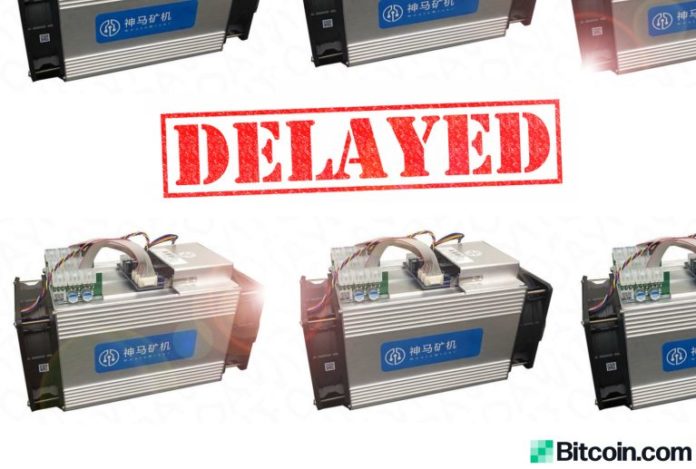 The cryptocurrency market rout in mid-March, which saw bitcoin’s price slide significantly in value, has strained bitcoin mining operations by slashing considerable revenue from the block rewards. Moreover, shipping delays from mining manufacturers have caused uncertainty and mining operations don’t know when next-generation miners will ship. The mining firm Hut8 has revealed in an earnings call that the company is worried about the aftermath of the coronavirus economy, the upcoming halving, and mining rig shipment delays.

The BTC halving is 28 days away and expected to happen on or around May 12, 2020. This means miners will see 50% of their revenue disappear because, after the event, they will only get 6.25 BTC per block in contrast to 12.5 coins per block. Furthermore, the market carnage that took place in mid-March shaved 30% off the price of BTC as well, making mining revenues quite slim. The price drop had caused a small capitulation of miners and BTC’s overall hashrate had lost roughly 45%. However, the hashrate has regained at least 90% of the hashrate back, as the overall hashpower today is around 120 exahash per second (EH/s). After the markets shuddered on March 12, otherwise known as ‘Black Thursday,’ the large mining operation DPW announced that the firm’s subsidiary mining business, “Digital Farms,” closed up shop “indefinitely.” Now the publicly traded companies Hut8 and Riot Blockchain have both revealed that the coronavirus economy is threatening mining operations.

Reports note that the CEO of Hut8, Andrew Kiguel, told investors during an earnings call that the company was struggling with delayed mining rig deliveries. Kiguel and his firm thought that machines would’ve been delivered last month or in April, but the covid-19 crisis has made shipping dates uncertain.

Riot Blockchain’s 10-K report to the Securities and Exchange Commission (SEC) highlights that the firm is struggling with being classified as a “nonessential business.” In the U.S. all of the country’s states are under executive lockdown orders from state governors and only certain businesses like grocery stores, gas stations, and pharmacies have been deemed “essential.”

“If we are unable to effectively service our miners, our ability to mine bitcoin will be adversely affected as miners go offline,” Riot Blockchain explained to the SEC in the firm’s 10-K filing. Riot also announced on April 14, that the company partnered with the firm Coinmint and is planning to relocate a number of Bitmain-brand miners to the former Alcoa Aluminum smelter in Massena, New York.

Miners Worry About the Upcoming Bitcoin Halving – $12.5K Or Bust?

The Canadian-based firm, Hut8 is also wary of the upcoming BTC halving, which will shave mining revenue in half for every BTC mining pool and operation. As part of BTC’s issuance model, every 210,000 blocks mined makes it so the block reward is cut in half. At the time of publication, a single BTC is swapping for $6,700 and a number of analysts assume the price needs to increase by at least double in order for BTC miners to profit after the halving. A research report written by the researchers at the firm Tradeblock estimates the price needs to be at least $12,500 per coin for miners to profit after May 12.

“[Our research] suggests that miners are likely expecting the price of bitcoin to rise to higher levels (above ~$12,000-15,000 per BTC) around the halving allowing them to continue to generate a profit, or they likely will look to reduce resources following the halving resulting in a hash rate decline as profitability falls,” Tradeblock’s report detailed.

What do you think about Hut8 and Riot Blockchain expressing concerns? Let us know what you think in the comments below.

The crypto market has been caught within a state of purgatory for the past several days, with most major altcoins...