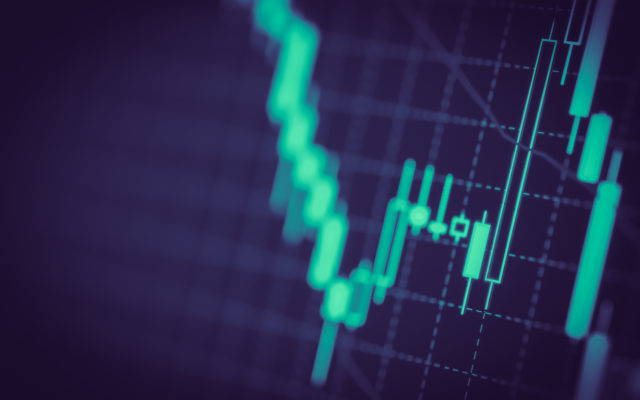 Bitcoin price analysis shows BTC/USD returning above $8,000 was short lived. But is the dream of $9,000 now dead for the bulls in the near term? Let’s take a look. 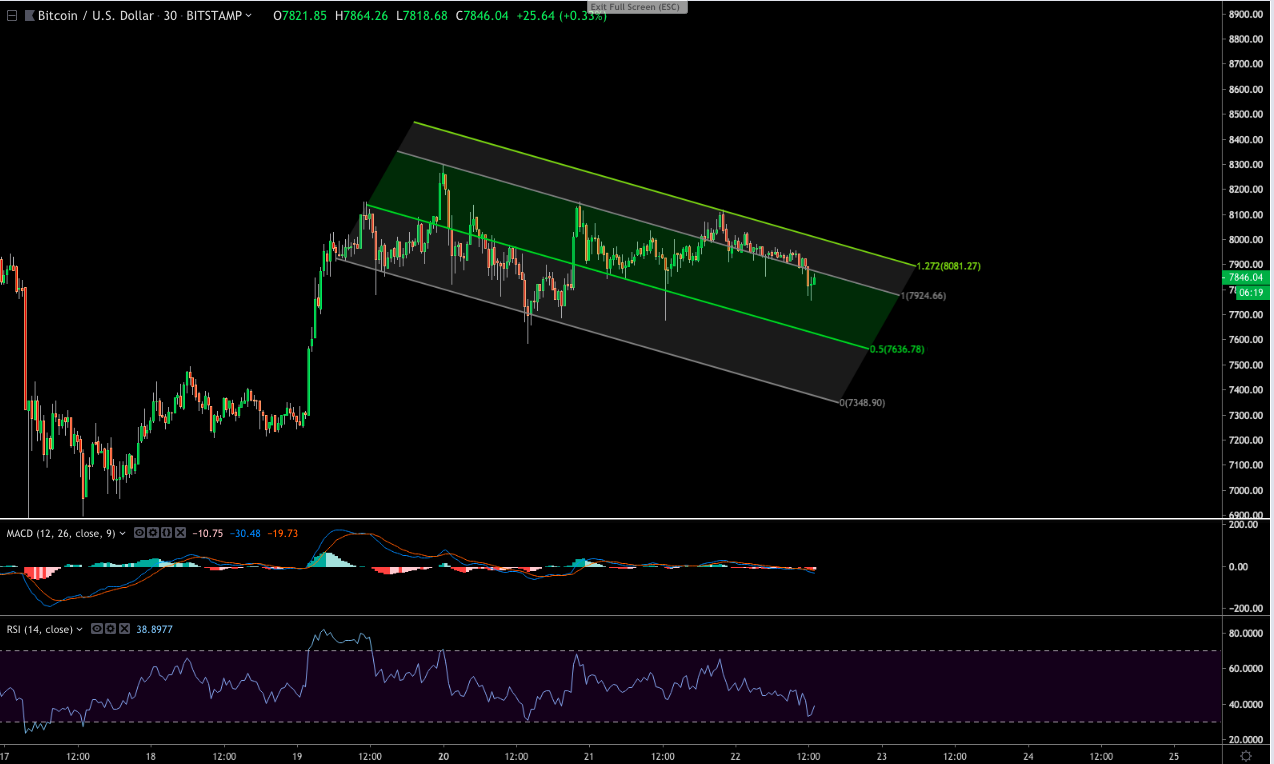 Today, ramped up selling pressure has extended Bitcoin’s distance from the psychological level by $200, leaving bullish traders fighting to defend the $7,800.

Looking back at the BTC/USD 30-minute chart we released yesterday, we can see that the price managed to breakout of the downtrending channel during the late hours of May 21, and rally all the way to the 1.272 fibonacci extension level at $8,105 before correcting.

From there, the asset found new support along the 1.0 fibonacci level until midday today (UTC+1 time), when bear traders forced the price action back into the downtrending channel.

Looking at bitcoin price 00 right now over this time period, it appears that bullish traders have managed to regain some composure along the $7,800 level, and are attempting to pushback against the downtrend. 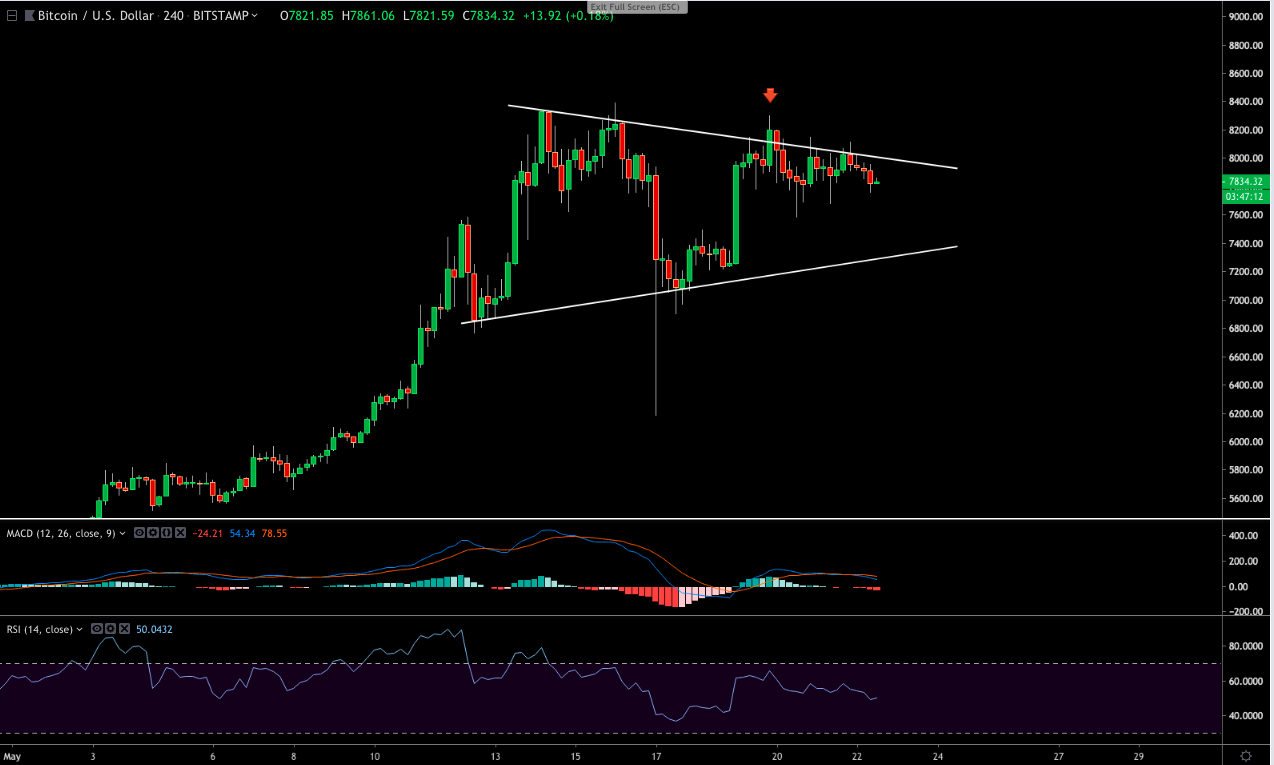 On the 4-hour BTC/USD chart we can see that the asset is still tracking inside the bullish pennant pattern that we identified in another analysis earlier this week, here.

By extending a trend line out from the first two highs, we can see that the most recent swing high meets it perfectly. The bull-run on May 19, however, sticks out above the resistance level (red arrow), which suggests it could have been a fake out.

Looking at the MACD indicator, it appears that buying confidence is beginning to dwindle as the 12-MA diverges further away from the 26-MA above, and selling volume on the histogram increases.

The RSI line is also downtrending as selling momentum increases behind Bitcoin.

From this, it appears likely that BTC will continue to downtrend unless bullish traders can launch an upside recovery from the $7,800 level. If this critical support fails to withstand the intraday selling pressure, then we could see bitcoin price extend its losses towards much lower supports. 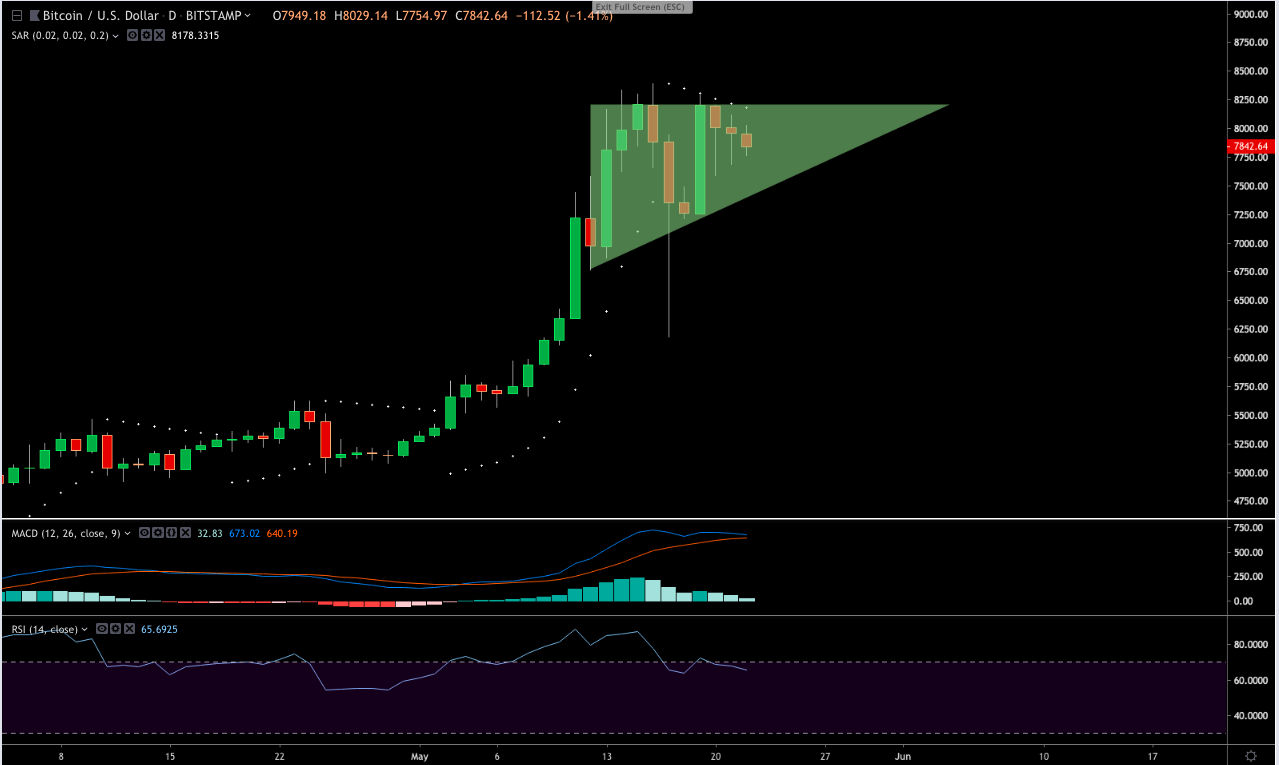 On the Bitcoin daily chart, however, we can see another promising bullish pattern beginning to form. This particular type of trading pattern is known as an ascending triangle pattern, and is characterised by increasingly higher lows meeting a flat resistance.

These patterns show that bullish traders are progressively growing stronger after each unsuccessful resistance test. What we expect to see is the price continue to make higher lows along an uptrending support until it eventually overpowers the resistance above.

From there, the asset typically breaks bullish towards a new high. In this case, the next strong resistance for BTC is likely to be around $9,000 as bullish traders edge closer towards the fabled $10,000 mark.

Looking at the MACD indicator we can see that momentum continues to be favourably bearish as the 12-MA starts to arc towards the 26-MA, and buying volume shows a marked decline on the histogram.

The Parabolic SAR indicator is also supporting a bearish continuation, with signal dots appearing above the price action.

On the RSI, the indicator line is continuing to correct back inside the channel after briefly breaking into the overbought region on May 19, as buying momentum drops.

At this stage, if BTC price continues to decline we need to wait and see if it manages to pick up along the uptrending support of the ascending triangle pattern, to confirm that the pattern is still playing out. This is likely to be roughly around the $7,500 – $7,600 area.

If it falls through this region, then we can assume that the pattern has been rejected and that BTC is likely to bearishly reverse.

If it springboards off the support successfully however, then we will continue to monitor its interaction with the $8,200 resistance above and see if there’s an opportunity for an ascending triangle breakout.

[Disclaimer: The views and opinions of the writer should not be misconstrued as financial advice.]