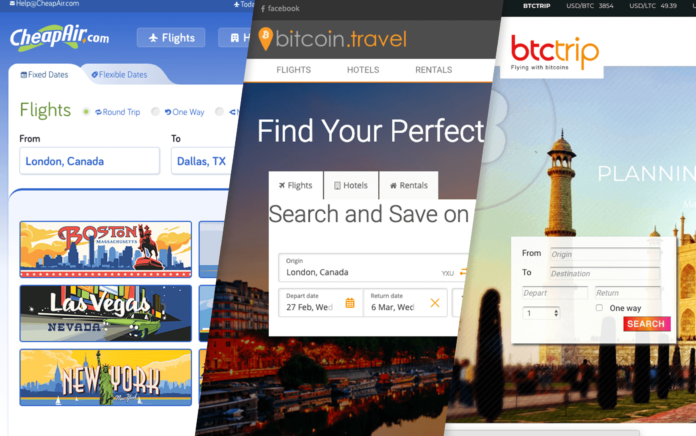 For bitcoin specifically, traveling on the world’s first cryptocurrency is a way to push the currency to its limits across borders. For some, traveling on bitcoin is a proof of concept: a way to experience the boundaries that currently confront bitcoin’s usability in markets big and small.

Beyond bitcoin, blockchain has some compelling use-cases percolating in the travel and transport industry that may help move people around faster and cheaper. From identity to loyalty programs, blockchain is finding new value in an established arena.

Spending exclusively bitcoin as you travel the globe is getting closer to becoming a reality. New methods to book hotels and flights are becoming more available as the industry opens its doors to cryptocurrency.

In addition to online booking, travelers have been able to tap into a growing community of retail businesses that are accepting bitcoin over the counter for their goods and services. Coffee shops, grocery stores, and nightclubs around the world have adopted bitcoin as a payment method.

For now, traveling with bitcoin is easiest in urban city centers. Shops and vendors accepting bitcoin proliferate the downtowns of cities like Tokyo, NYC, Toronto, Singapore, and Los Angeles.

Booking with Bitcoin: Use Bitcoin to Plan and Book Your Trip with These Travel Sites

Gone are the days of using bitcoin on the popular travel site Expedia. Likely due to market volatility, companies are increasingly turning away from bitcoin as a direct payment method.

However, with major booking agencies leaving a vacuum for bitcoin-friendly operators to find their niche, other successful travel sites have filled that void.

A player in the industry since 2013, BTCTrip was an early favorite among the crypto community. Key names have endorsed the travel site as a more pure option to traveling with bitcoin. Charlie Lee, Jon Matonis, Erik Voorhees, and Roger Ver have all had good things to say about this online travel site. Not to mention Vitalik Buterin’s early op-ed in Bitcoin Magazine.

Where BTCTrip truly shines, however, is in its prices. Most intermediary services that allow users to purchase products from the fiat currency economy with bitcoins by proxy work by charging a small percentage fee, so the services are actually more expensive than simply paying with one’s credit card directly.

Cheap Airlines is a prominent hub for online travel bookings, with options for flights, hotels, and cars. Customers can use bitcoin as their payment method for any of their services.

Cheap Airlines avoids falling into the category of intermediary, which Buterin had commented on, by not charging any extra fees for bitcoin payments. Instead, they take full advantage BTCPay Server, an open source payment processor. Notably, BTCPay doesn’t require KYC, is self-hosted, has no processing fees, no middleman, and is Lightning Network enabled.

Bitcoin.travel is another reputable option to spend your bitcoin (and altcoins) while traveling. They currently offer flights and hotels in addition to Airbnb-style rental options.

The rental option is a unique feature in comparison to other travel sites accepting cryptocurrencies. Here, hosts can lease their spare rooms, vacation properties, or cottages just like with Airbnb. However, all payments are made completely in a cryptocurrency and never exchanged into a fiat. Guests can pay in bitcoin or a handful of altcoins, and hosts receive payment in similar cryptocurrencies of their choice.

Although more vendors are accepting direct payment in cryptocurrencies, depending on where you are traveling, finding a robust range of options may still require filtering through Reddit and other bitcoin forums. Heat-map of crypto merchants around the world from Coinmap.org

Coinmap, however, is aggregating the merchants you can visit with bitcoin onto a handy interactive map. A quick look at the heatmap of bitcoin vendors shows a massive concentration of merchants in Europe, as well as America, Korea, and pockets of South America.

By far the most active area for spending your bitcoin is Europe. So, perhaps it’s a good time for a bitcoin Eurotrip.

Alternatively, for those times when only the local fiat currency will do, you’ll want to find a bitcoin ATM to make a cash withdrawal. Bitcoin ATM Map, similar to Coinmap, has an interactive map you showing active bitcoin ATMs.

Blockchain in the Transport Industry

Beyond vacations and backpacking, blockchain is creating value in a handful of areas peripheral to the transport and travel industries. Chiefly, identity, ride sharing, and loyalty programs have exciting use-cases for blockchain and decentralized organizations.

A Blockchain Backed Identity May Be Faster and Safer

Recently, Canada has endeavored to pilot a border security identity system that blends blockchain with advanced biometrics. The current program is for a select amount of travelers and in partnership with the Netherlands.

In a blockchain backed identity system, travelers have a digital passport likely accessible from a phone app. They retain their identity information while crossing borders, instead, confirming their identity with biometrics such as fingerprints and retina scans.

Little is known about the specifics of the blockchain. However, it is presumable that identity blockchains used in transport are also ideal candidates for zero-knowledge proofs. This type of asymmetric information can greatly improve security and reduce crimes like identity theft.

Furthermore, not surprisingly as a government ran initiative, the identity blockchain will be permissioned and likely be a version of a proof-of-authority or another similar consensus algorithm.

Using an identity system on a blockchain in transport could be a useful measure to move people and packages through key travel points like airports and border crossings.

For Canada, the pilot program is an effort to hedge against the forecasted increase in air travel. In a statement during the World Economic Forum, Canada’s Minister of Transport, Marc Garneau, said, “Innovation is key to enhancing global competitiveness, mobility, and productivity. Leveraging new technological advancements can support risk-based approaches to public safety and security, making air travel more efficient while improving the travel experience.”

A growing industry, the loyalty management market is predicted to escalate to $4 billion by 2020. However, as highlighted in a report from the Deloitte Centre for Financial Services, the industry is being held back by some common factors:

Understandably, consolidating an industry of this size into a single unifying network is considerably easier said than done. However, technologies like atomic swaps or network specifics connections like Cosmo Network’s Peg-Zones enable value to exchange across networks.

Stretching your legs and exploring the world is becoming more accessible to anyone looking to live on their cryptocurrencies. Book your vacations on travel websites and visit cafes, bookstores, and restaurants across the world using exclusively cryptocurrency.

It will not be surprising to see more projects using blockchain in the transport and travel industries as the technology continues to mature into more use cases.

The post Bitcoin Travel and Transport: Can Blockchain Evolve How We Get Around? appeared first on CoinCentral.