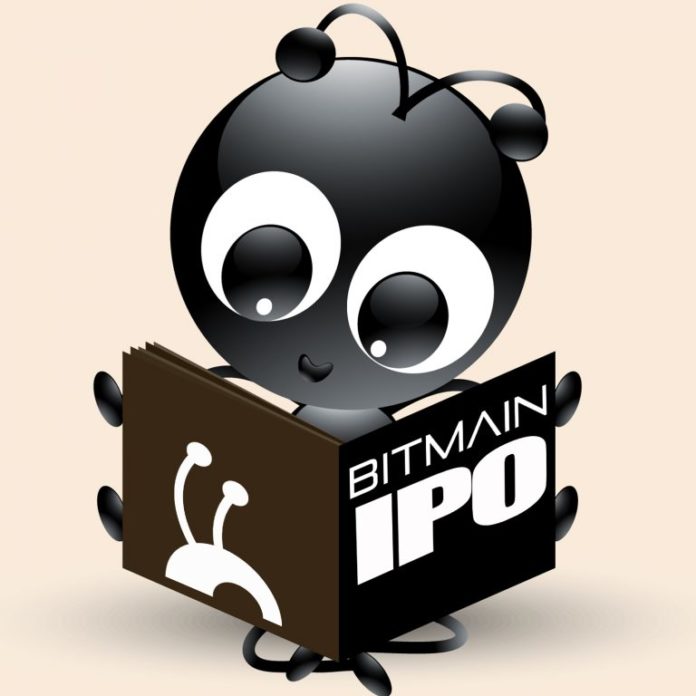 The China-based mining manufacturer Bitmain Technologies has filed its initial public offering (IPO) prospectus in order to gain approval to be listed on the Hong Kong Stock Exchange.

The large mining firm Bitmain has officially initiated its attempt to be listed on the Hong Kong Stock Exchange (HKEX) with its multi-billion dollar initial public offering (IPO) bid this week. The application states that Bitmain Technologies Holding Company (比特大陸科技控股公司), a limited liability firm incorporated in the Cayman Islands is applying to be listed on HKEX. According to reports and leaked documents the suggested IPO could be around $15-18 billion with the listing possibly launching in Q1 of 2019.

The official IPO prospectus details the mining giant’s underwriters as well which include KPMG, Maples and Calder, Frost & Sullivan, and the China International Capital Corporation Hong Kong Securities Limited. Of course, the Bitmain IPO document says it is incomplete because most of the hard numbers have been redacted, and are also subject to change. In the prospectus overview, Bitmain explains they are “China’s second largest and among the world’s top ten fabless IC design companies in terms of revenue in 2017, according to Frost & Sullivan.”

We focus on the design of ASIC chips specialized in cryptocurrency mining and AI applications, and we are the fourth largest global fabless ASIC chip design company in terms of revenue in 2017, according to Frost & Sullivan.

In the filing, Bitmain says they have experienced “exponential growth” since they started, and revenue increased from “US$137.3 million in 2015 to $2.5 billion in 2017.” The prospectus notes that Bitmain pulled in a staggering $1.2 billion in profit in 2017. The firm also details that profits have continued during Q1 and Q2 of 2018 as well. “Our adjusted EBITDA increased from $101.8 million for the first six months of 2017 to $1.2 billion for the first six months of 2018,” Bitmain claims. The Chinese firm also gives a few details on some of the investments Bitmain has made this year like the recent funding of Circle Financial, and Opera Limited.

The company says they believe they have shown great strength over the years as a blockchain and mining business that sets them apart from other competitors. Bitmain says they have pioneered the ASIC chip industry in a “thriving blockchain ecosystem,” alongside a “close partnership with leading supply chain partners.” The IPO filing also follows last weekend’s announcement when the firm’s CEO Jihan Wu reported that Bitmain’s next-generation ASIC BM1391 7nm Finfet chip will be mass produced soon. Prior reports also reveal two other large mining companies Ebang Communication and Canaan Creative are also looking to go public with IPOs as well.

What do you think about Bitmain’s bid to go public in Hong Kong? Let us know your thoughts in the comment section below.

There have been a few events in the crypto sphere that involved Stellar (XLM). In the past few weeks, it...