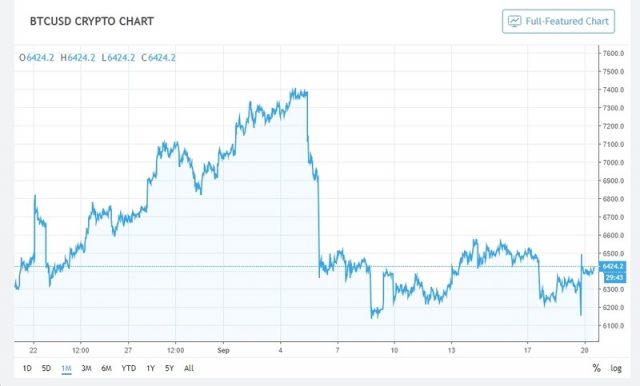 Two conflicting forces could be set to push the price of Bitcoin (BTC) in one direction or another. Following a four-week-high of just over $7,300 at the start of September, those following the Bitcoin price live can’t help but have noticed the $1,000+ drop in recent days. Although five-figure peaks and troughs have been common throughout 2018, a dramatic short-term shift could be on the horizon.

For the bulls, BTC price charts could move in a positive direction in the coming months, thanks to private equity firms Brookstone Partners and a Moroccan wind farm. Despite being an unlikely pairing, the former is set to build a 36-megawatt wind farm in Morocco. Looking to take advantage of the company’s power purchasing agreement (PPA), Brookstone Partners will sell at least 20% of the energy generated back to the government.

Bitcoin Proving It Has Value Outside of Exchanges

For crypto investors, the move is significant for two reasons. Firstly, the project will be funded by a Bitcoin mining company formed by Brookstone Partners. Although it won’t contribute directly to the technological development of the blockchain, it’s an example of Bitcoin’s utility outside of the tech sector. Indeed, when you pair this with Bitcoin’s influence on music and sport via eToro’s football investments, the coin has clearly got something to offer the world at large.

Secondly, Morocco is one of the few countries to outlaw Bitcoin payments. Although not stated, the move could be a way of currying favor with the local government. By showing that Bitcoin can be a force for good, the wind farm project could prompt politicians to reevaluate their stance on cryptocurrencies. Should that happen, the price of BTC could receive a mini-pump. In fact, with money from the sale of energy by Brookstone likely to be reinvested in its Bitcoin mining operation, it’s almost as though there will be a tacit link between Morocco and the BTC economy.

Mt.Gox Continues to Blight the Price of Bitcoin

On the other side of the coin, a Bitcoin price crash could be on the horizon. The impending influx of lost Mt.Gox coins could have cataclysmic implications for the market. Following a Japanese court’s decision to take the fallen exchange out of bankruptcy, the company is now set to refund its creditors. The issue here is that the 2014 Mt.Gox scandal saw 700,000 BTC stolen and never recovered. Following the June ruling in Tokyo, the exchange announced at the start of September that its creditors would receive this amount back.

If these coins are released into the market at once, the Bitcoin price in dollars will take a tumble. Oversaturation could spook investors and lead to a surge of sales. The natural consequence of a mass coin dump is always a crash. What that means for the price of BTC in real terms is unclear. Despite having a rocky year, it’s still the most valuable cryptocurrency by far. Based on this, it should be able to withstand a crash to some degree. What’s more, there are clearly some positive opportunities on the horizon.

However, all things considered, a BTC price slide could be coming. For those already invested, it may be time to sell. For those waiting for an entry point, any time after the reimbursement process starts should make it possible to buy Bitcoin for a low price.

The post Can Windfarm’s Prevent Bitcoin Price Crash Ahead of Mt.Gox Payments? appeared first on The independent republic.

Cryptocurrency trading platform Poloniex has delisted eight coins with low liquidity, while another US-based exchange, Gemini, is adding litecoin to...