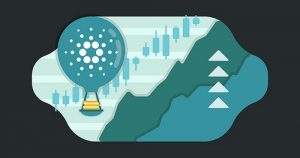 Presently, Ethereum’s blockchain is the only one of its kind capable of offering smart contracts that enable developers and service providers to achieve pretty much anything they wish. From banking services and real estate transactions through to sales and engineering, Ethereum’s smart contracts are one of its defining features. However, it is about to come head-to-head with a new rival that has a one-track goal of disrupting the smart contracts space.

Cardano, a blockchain project founded upon scientific philosophy and peer-reviewed academic research, is coming up fast on Ethereum’s blindside with its own smart contract platform. Already considered a cryptocurrency to watch, Cardano has released a host of use cases of Marlowe, Cardano’s domain specific language (DSL) aimed at the execution of financial contracts on blockchains in the Peyton Jones style. There’s no doubt that Marlowe has a one-way ticket to the financial service sector, with its potential to push both Ethereum’s smart contracts infrastructure and the current Escrow framework into obsolescence.

In effect, Marlowe has been designed to displace Escrow and redefine its place in the financial ecosystem. For instance, banking institutions would have the capability to execute a smart contract and perform their obligations that would historically be driven by Escrow without any hold-ups. A new document on Marlowe was recently published by IOHK, which suggested that the Marlowe functionality could be easily embedded into other languages for swift and efficient smart contracting.

At the point in time when Cardano entered into the cryptocurrency market, few believed it had much to offer the crypto space. Nevertheless, its dedicated project team are already working hard to prove their naysayers wrong. In terms of market cap, Cardano has already become the ninth most valuable digital asset on the planet. In a bid to cement its place in the top ten of the crypto scene, the platform’s founder, Charles Hoskinson, has taken to the internet to leak some of Cardano’s ongoing projects to generate increased chatter and momentum surrounding the brand.

Most Cardano enthusiasts will already be aware of Hoskinson’s ambition to position Cardano as the number-one third-generation cryptocurrency. Hoskinson and his team of developers have been undergoing a series of “secret projects”, with two potential new developments under the Cardano umbrella, Icarus and Yoroi.

According to Hoskinson, Icarus is a “fully open-source code base” and is said to be the first step in “a range of open-source initiatives” aimed at arming developers with a powerful suite of tools for use with Cardano. Certainly, a provision of tools for developers on the Cardano blockchain will ring alarm bells for the Ethereum ecosystem, which could result in a sizeable migration of blockchain-based developers from Ethereum to its new rival.

Earlier this week, one of the key players in some of Cardano’s recent projects, Emurgo, disclosed its latest tool called Yoroi. This lightweight client wallet has already been labelled a potential game-changer and is built to operate on the Cardano blockchain. The Yoroi wallet is said to be easy to use, highly secure and makes exceptionally fast transactions. The wallet was built using state-of-the-art software procedures and benefits from a detailed audit on its security system.

How has this affected the price of Cardano recently?

Overall, Cardano has proven itself to be a stable altcoin on the exchanges. It’s not been alone in seeing its value decline significantly since its January 2018 peak and its various achievements and future aspirations have led some crypto forecasters to predict that the value of Cardano (ADA) could reach $10 by 2019. One of the most interesting developments to keep an eye on is Cardano’s fledgling working partnership with South Korean mobile giants, Metaps Plus. Once this partnership moves into full swing, it is felt that Cardano will be considered a legitimate contender in the crypto space given that South Korea is a veritable hotbed for everything cryptocurrency-related right now. With that in mind, a legitimate break in price could even happen on ADA before the end of this year.

There has been a lot of bluster and trash-talking from Charles Hoskinson in recent weeks. He’s claimed that Bitcoin is “advertised as a payment system and a means of exchange” and that when users attempt to use it for those purposes it has “been a miserable failure”. Cardano’s closest rival, Ethereum has also not escaped criticism from Hoskinson either. The Cardano founder says Ethereum “claims to be a world computer” but then mocked the network for “CryptoKitties breaking it”. If Hoskinson and Cardano can back up the derision of their competitors with products that change the game for smart contracts, maybe their uber confidence will be justified after all.