CEX.io is one of the oldest Bitcoin exchanges around. It started out in 2013 in London as a Bitcoin exchange and cloud mining provider. At some point the mining pool known as Ghash.io was so big it held 42% of the total network mining power.

However, on January 2015 the cloud mining operations were closed and today CEX.io operates solely as a Bitcoin exchange. CEX.io is registered with FINCEN and It applies KYC (know your customer) and AML (anti money laundering) policies. This means you’ll need to verify your identity before you will be able to buy Bitcoins via the exchange.

CEX.io allows you to buy Bitcoins using your credit card, a wire transfer or a SEPA transfer (if you live in the EU).  However CEX.io transactions work a bit differentl than other Bitcoin exchanges, they are based on Fill-or-Kill orders (also known as FOK).

FOK orders are orders that are executed immediately and in full. So whatever you “agreed” to pay or get, that’s exactly what will happen. This is different than how other exchanges work where you may encounter liquidity issues. So for example, if you but 2 Bitcoins at an agreed rate on CEX.io you will definitely receive that amount, however if you but 2 Bitcoins on Bitstamp you will need to wait until someone who’s willing to sell you those Bitcoins at your requested price comes along.

However, for this to work 100% CEX.io has to charge customers a premium so that they will always be able to fulfill their orders, hence the higher exchange rate.

How does CEX.io work?

CEX.IO has a very clear explanation on their site about how this service works, here’s a summary of it:

When you enter a trade, CEX.io calculates the price and freezes it for 120 seconds.  You input the amount of money you wish to spend and you see the amount of Bitcoins you can receive. After you press the Buy/Sell Button, the system checks to see that you have enough funds available.

If the situation on the market allows the execution of your order on conditions not worse than you agreed on, the order will be filled (The order can also be filled on more favourable conditions). If there is a sudden spike in the exchange rate — preventing the execution of the order on the agreed conditions — you will be notified. After you confirm the trade, your order is matched to other orders on the exchange, and your balance is adjusted — sometimes the amount can be even greater than agreed on, but is never smaller.

One of the biggest complaints users have about CEX.io is the amount of fees and “hidden charges” they take. CEX.io takes a 7% fee for the service which is charged from the amount of fiat currency you pay. So if you buy $1000 worth of Bitcoins you’ll get only $930 worth. This means that the high exchange rate you see on CEX.io already includes the service fee within it, and no other fees will apply.

However the fee stated above is only relevant if you want to do a direct purchase with CEX.io. The exchange also supplies trading services in which different fees will apply. In order to trade you’ll need to fund your CEX.io account with either a bank account (no commission on CEX.io’s part) or a credit card (3.5% + $0.25 commission). Also, once entering a trade you will need to pay up to a %0.2 transaction fee depending on your part in the trade.

There are four different account limits on CEX.io – Basic, Verified, Verified Plus and Corporate.

Verified plus and Corporate accounts have no limitations on the amount of Bitcoins that can be bought.

In order to become verified you’ll need to supply a government issued id and personal information about yourself.

Perhaps one of the most controversial issues about CEX.io is the user reviews it gets online. Both TrustPilot and Bittrust give CEX.io an average rating of 3 out of 5 stars. Reddit also had a very short and worried review about the exchange. However most people don’t actually read the detailed reviews they just look at the ratings, so I decided to do just that.

It seems that the majority of dissatisfied user reviews are either complaining about the hidden fees (i.e. high exchange rate), the identity verification process or the site’s customer support. The first two issues are usually related to people not understanding the fine print, and CEX.io has made it much clearer in the past few months how much will you pay for your coins. As can be seen below:

Regarding support I ran a test. I clicked on the “help” icon that’s available on each page of the site and wanted to see how fast I can get a response. The support rep answered within 20 seconds and gave me a pretty detailed response (even though it was a canned response). So personally I was pretty happy with that. 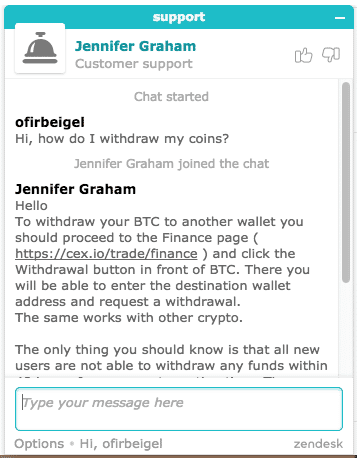 Most of the bad reviews that were on TrustPilot also received a response from CEX.io so it’s good to see that the company cares about its reputation. And finally, the short reddit review I read didn’t shed any new light on the exchange. Most people on Reddit said they didn’t have any issues with it, and the original poster just didn’t understand the identity verification process.

Conclusion – Is CEX.io a Good choice?

Until today I have used CEX.io several times and haven’t had any issues. I think it’s a solid exchange, with the only downside being the 7% fee they charge for buying Bitcoins. In the past year or so the exchange has leap frogged froward and has become on of the leading Bitcoin brokers around. The user interface is very intuitive and even complete newbies will manage to buy Bitcoins with it. As long as you are aware of the fees and the verification process needed to buy more substantial amounts of Bitcoin you’re good to go.