February 3, 2018, “2017-2018 China Blockchain Billboard Grand Ceremony ” a.k.a “The Third China Blockchain Industry Summit “was held in Shanghai as scheduled. Leaders from Ministry of Industry and Information Technology of the People’s Republic of China, Computer and Communications Industry Association (CCIA), China Hi-Tech Industrialization Association (CHIA), and the blockchain industry experts from different parts of the world, a total of more than 500 guests attended the summit. Based on its major breakthrough in blockchain technology, SmartMesh won International Blockchain Innovation Award.

In fact, the Blockchain Billboard Awards are granted only to the international project teams who contributed to the innovative breakthrough of the blockchain technology. Singapore based SmartMesh won this award because recently it made a major breakthrough in the blockchain expansion technology of Mobile Lightning Network development which fostered its success.

Prof. Weide Cai, a scientist of the “Thousand Talents Program” said that blockchain technology is the fourth industrial revolution which is far more beyond artificial intelligence and big data technology. Stanford University professor, an associate member of three US universities Prof. Shoucheng Zhang said that blockchain technology is the new turning point in the development of the Internet.

The invention of TCP / IP protocol has propelled the advent of the Internet era. Packet Switching has replaced Circuit Switching. And the Atmosphere and Token Switching that proposed by SmartMesh founder and CEO Henry Wang are able to allow cross-chain on the blockchain’s Secondary Architecture and on the level of Lightning Network, Raiden Network and Plasma; to allow interconnection on the MeshBox. After decades of development, the internet has ushered in another era of frequent separation and integration. SmartMesh and Token Switching will drive the internet to advance to The Internet of Value and The Internet of Things. 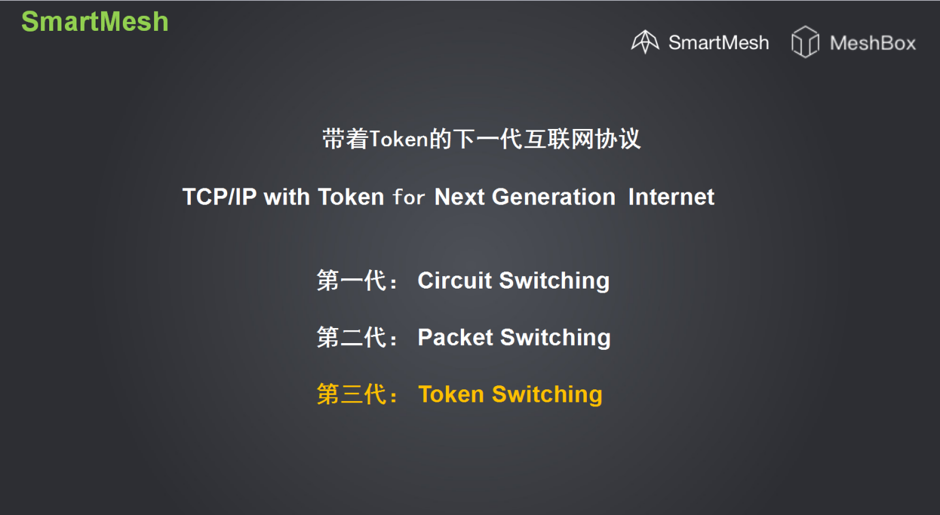 Henry Wang shared SmartMesh’s mission and its future development ideas during the summit, it won the praise and applause of the guests. Henry Wang said that at present in the world there are still billions of people who have no access to the Internet, and also network congestion is a common problem in the areas where internet is developed. The Internet operators have no effective solutions to above-mentioned problems, so it seems that the development of the Internet industry has reached its bottleneck. These problems can be resolved by the Mesh Network constructed by the SmartMesh protocol.

The ultimate goal of SmartMesh protocol is to build a global coverage of the mesh network to form a parallel Internet. The existing network services can all be distributed through a mesh network, providing communications, video, games and other services to the people when the Internet is not available.

SmartMesh is more than just a public blockchain. With Atmosphere, SmartMesh will lead the blockchain industry to break through the borders of the Internet, which will greatly enhance their scope of application and improve the number of potential target customers. As a result, many businesses may profit from these changes, and bring even greater transformation. The work and life of people will, therefore, become more convenient.

Not long ago, SmartMesh has completed the world’s first Mobile Raiden micro-payment test on the Ethereum Testnet network, which means that Mobile Raiden is about to enter people’s lives, and the era of offline payment is imminent.  And The MeshBox, the first eco project under SmartMesh protocol, is tailor-made for hosting Mesh networks. In future, most of the Mesh network nodes will be provided by MeshBox. Whether or not connected to the Internet, as long as MeshBox is set up, even in remote areas, information can be transmitted through Mesh network, which will provide the convenience of the network to those who are unable to connect to the Internet.

More importantly, each MeshBox in the future will become a network node for the Mobile Raiden which means that Lighting Network will have tens of millions of network nodes around the world. This will build a mobile micro-payment system that is linking the world and building up a more effective link for global network transactions. At the same time, the realization of Mobile Lightening Network on smart devices has resulted in a substantial increase in transaction speed and has greatly reduced the transaction costs. This makes the much-needed M2M payment for the Internet of Things a reality and opens up a new era of decentralized IoT.

Disclaimer: This article should not be taken as, and is not intended to provide, investment advice. Global Coin Report and/or its affiliates, employees, writers, and subcontractors are cryptocurrency investors and from time to time may or may not have holdings in some of the coins or tokens they cover. Please conduct your own thorough research before investing in any cryptocurrency.

TRON (TRX) Main Net Launch is Ahead of Schedule

Justin Sun, Tron’s CEO and the public face of the cryptocurrency, just announced an acceleration of their main net release....