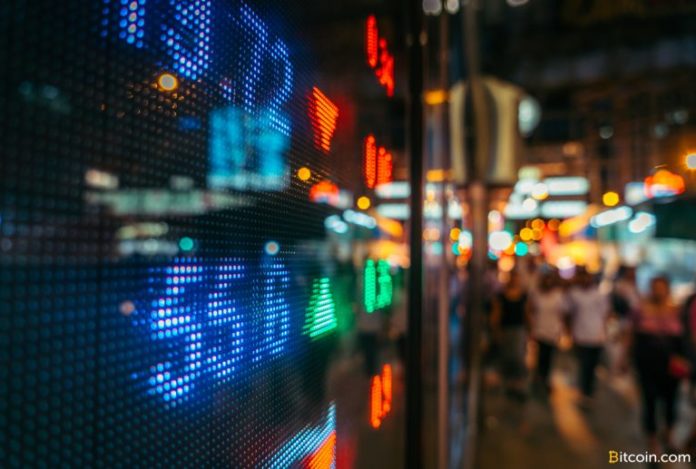 Back in January 2017, China’s financial authorities initiated their first crackdowns against domestic bitcoin exchanges, with a ban on mainland exchanges cryptocurrencies against the yuan coming shortly thereafter. Now, close to two years and three months later, a surge of CNY has been flowing back into the digital currency economy after the Shanghai Composite posting a 24 percent gain this week.

The Steady Rise of CNY Trade Volumes on Paxful and Localbitcoins

Since the increase in cryptocurrency volumes and some solid gains across the board, digital currency supporters have noticed a resurgence of Chinese yuan (CNY) pour into the cryptocurrency ecosystem. On March 17, the avid BTC trader Anton Pagi tweeted to his followers that the latest rally has been fueled by CNY. “Something to watch during this bull run, Chinese profits from their roaring stock market in recent weeks flowing into bitcoin,” Pagi detailed while explaining that exchanges dealing with CNY have “more than doubled in volume in the past week.” Moreover, the Shanghai Composite has spiked more than 24 percent and speculators believe investors are moving into alternative markets.

In addition to the statements from Pagi, data from a few different cryptocurrency data collection sites draw the same conclusions. For instance, Localbitcoins volumes have been steadily climbing since the second week of February’s low of 12.9 million yuan ($1.9 million). This week CNY volumes touched a high of 25.4 million yuan ($3.7 million) in trades during the 2-week period on March 16. Similarly, the peer-to-peer trading platform Paxful show a significant increase in CNY/BTC trade volumes as well after the lows last month. In addition to the Shanghai Composite stock pump in China, the country’s Premier Li Keqiang has also pledged to cut taxes and deregulate the tech industry in order to boost China’s slowing economy. This has given speculators reason to believe Chinese investors are being less frugal with regard to digital currency and blockchain investments.

In parallel with the peer-to-peer exchange volumes, the data and price website Coingecko also displays a jump in CNY/BTC volumes over the last 24 hours. Further, the statistical website Coinlib.io shows some considerable CNY inflows into a few different cryptocurrencies. At the moment Coinlib’s data shows $161.3 million worth of CNY flowing into BTC markets. This is followed by $74.1 million into CNY/ETH and $19.7 million worth of CNY/XLM trades as well. With tether (USDT) fueling the current rally, as far as the top pair traded with all the dominant cryptocurrency markets, CNY has still managed to find its way just below the U.S. dollar for a short period.

There are between roughly 12 and 15 prominent exchanges that Chinese investors can still flock to for cryptocurrencies but they are all located offshore. Current exchanges fueling the renminbi and crypto flames right now include popular platforms like Hitbtc, Zb.com, Binance, and Fatbtc. Moreover, these specific exchanges started seeing more CNY volume since March 11 when the exchange Coinex revealed it would no longer serve customers from mainland China. The day before the Coinex announcement, Chinese legislative delegates called for a strict and clear approach to cryptocurrency regulations in the country, according to Securities Daily.

Intercontinental Exchange Data Services (ICE Data Services) recently tweeted out a lengthy list of cryptocurrencies to be included in its...