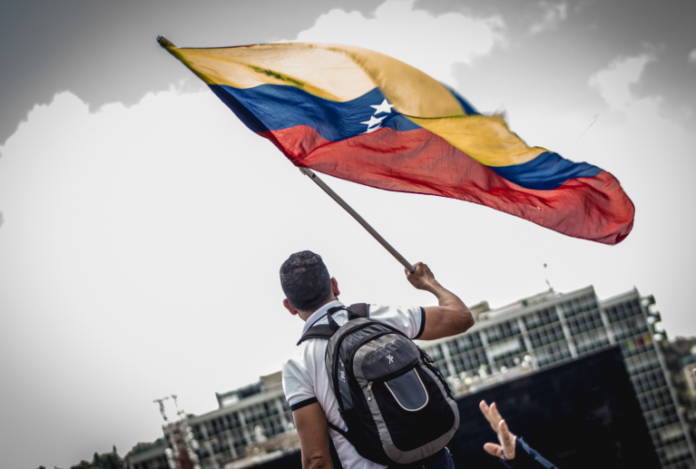 The political tension in Venezuela has affected local cryptocurrency adoption. While there are roadblocks, many crypto-advocating projects continue to thrive in the country. News.Bitcoin.com takes a deep look at the current situation in Venezuela, crypto adoption efforts and how the recent political crisis affects them.

Political Turmoil and Economy in Freefall

Cryptocurrency adoption in Venezuela has been affected by the recent political unrest following mass protests organized by Juan Guaido, president of the opposition-run National Assembly, calling for the military to help him end Nicolas Maduro’s reign. With the support of more than 50 countries including the U.S., Guaido declared himself acting president of Venezuela while Maduro insists he has been re-elected to a second six-year term. The incumbent still has the support of a number of countries including Russia and China.

During the years-long freefall of their country’s economy, many Venezuelans have turned to cryptocurrencies. Venezuela’s annual inflation rate reached 1,300,000% in the 12 months to November last year, according to the opposition-controlled National Assembly.

Widespread food and medical supply shortages are now the norm, with most Venezuelans struggling to afford basic items including food and toiletries. Although Venezuela is prime for crypto adoption, there are still many challenges in the way.

Seemingly a natural fit for such a failing economy, cryptocurrency adoption is progressing in Venezuela despite some roadblocks. Matt Aaron, leader of Bitcoin.com’s efforts in the country, explained how the recent political situation and ongoing power outages have affected local merchant crypto adoption.

Citing the political unrest, the frequent and lengthy blackouts, and the skyrocketing prices of goods and services due to shortages of basic necessities, Aaron admitted that “It’s really affected the crypto adoption.” However, he emphasized:

I think it’s still strong, it’s just that in the short term, they’re in survival mode in certain parts. But the willingness to learn about crypto has not gone down.

Despite political unrest, Venezuelans continue to trade cryptocurrencies. On over-the-counter marketplace Localbitcoins, 1,137 BTC were traded in the week ending May 4, only slightly less than the 1,228 BTC traded in the prior week. Bitcoin cash data is not provided by this platform but Bitcoin.com will soon launch Local Bitcoin Cash for anyone to directly exchange BCH.

Many people in Venezuela have found refuge in cryptocurrency. Carlos Hernández, a Venezuelan living in Ciudad Guayana, has shared how cryptocurrencies saved his family. Citing hyperinflation, he divulged:

I don’t own bolívars, Venezuela’s official currency. I keep all of my money in bitcoin. Keeping it in bolívars would be financial suicide.

Ricardo Carasso is a Venezuelan who earns cryptocurrencies from freelance work online. He recently left his country because the constant blackouts made it impossible for him to work from Venezuela. He told news.Bitcoin.com Wednesday that, in the city of Merida where he lived, the power went out five consecutive days in March after it went out for two days the prior week.

“For a number of years now the Venezuelan government has been upholding a currency exchange control that does not let us freely access the international market,” Carasso described. In addition, the U.S. has employed sanctions as a policy tool in response to activities of the Venezuelan government and individuals for more than a decade. “Now that the Trump administration has blocked our financial access to the world even further,” Carasso opined: “Cryptocurrencies are super valuable because they allow us to bypass that … it’s also an asset that can gain in value and … if your minimum wage is less than $10 a month, you can see the potential for growth if you have crypto.”

In an attempt to solve his country’s devastating economic problems, Maduro launched a new currency called the petro in February last year which he initially claimed to be a cryptocurrency backed by oil. However, he later declared that the petro was no longer fully backed by oil but was also partially backed by gold, iron, and diamond. Skeptics are calling his scheme a scam, pointing to several pieces of evidence such as the lack of wallet to hold the petro and the nonexistent block explorer.

Nonetheless, the National Superintendency of Cryptoassets and Related Activities (Sunacrip), the Maduro government-appointed regulator of crypto assets, has been selling the petro at its headquarters and issuing savings certificates to buyers. Recently, a crypto exchange authorized by Sunacrip, Amberes Coin, claims that the petro has been trading on its platform as well as over-the-counter on social media despite having no wallet or block explorer.

In January, the Maduro government established the Integral System of Cryptoassets, as published in Official Gazette number 41.575. It empowers Sunacrip “as the top regulatory entity in this matter, reinforcing, in addition, the entire initial ecosystem that since 2018 has been formed to give solidity and confidence to the petro, the sovereign Venezuelan cryptoasset,” Sunacrip wrote on its website. The regulator immediately proceeded to start controlling crypto activities in the country and offering its own crypto remittance service. Scam or not, the petro represents the first time any government has run its own cryptocurrency and related services, thereby creating awareness of cryptocurrencies and legitimizing them to the public.

A number of nonprofit organizations such as Airdropvenezuela are using cryptocurrency to help people in need. The nonprofit’s website states that “Due to artificially-rigged government exchange rates, the banks in Venezuela are not used for remittance, payments, or donations,” asserting:

The project aims to send $1,000,000 in digital money to 100,000 ID-authenticated Venezuelan Airtm users who log into their accounts between Nov. 27 last year and July 31. “The first 100k Airtm Venezuelan users to be verified and have logged into their account during the campaign period will be a recipient of $10 once we achieve our $1,000,000 USD equivalent goal,” the nonprofit announced.

In addition to U.S. dollars, donations can be made in a number of cryptocurrencies including BCH and BTC. They are sent directly to Airtm wallets which connect buyers and sellers to over 200 banking networks and e-money systems globally, including Venezuela’s.

Cryptocurrency totals less than $10,000 will be converted into U.S. dollars upon distribution, Airdropvenezuela clarifies. At the time of this writing, the nonprofit has raised the most in BCH, followed by U.S. dollars and BTC. Donations in bitcoin cash make up more than half of all donations received.

BCH donations got a kick start when Bitcoin.com CEO Roger Ver matched them for 24 hours on Dec. 10 last year. “Total funds raised have more than doubled since @Rogerkver announced yesterday that he would match BCH contributions. Congrats BCH community for jumping to #1 place in less than 24 hrs,” Airtm tweeted. “The bigger the network effect a currency has, the more useful that currency becomes. This is a great way to grow the network for Bitcoin Cash and help people in need at the same time,” Ver remarked.

A growing number of merchants in Venezuela are now accepting bitcoin cash thanks to an initiative by Bitcoin.com to make the process easy for them. At the North American Bitcoin Conference in February, COO Mate Tokay unveiled the company’s ambitious goal to onboard 500 merchants per month to accept bitcoin cash.

Aaron confirmed that, while there are other projects Bitcoin.com is indirectly affiliated with, his primary focus is getting merchants to accept BCH, elaborating:

We’re focused in Caracas, have around 150 merchants so far … we’re teaching them how to use bitcoin cash, how to convert to dollars and bolivares, and to show them the advantages.

He proceeded to outline the benefits of accepting the cryptocurrency for merchants such as instant transactions, being able to accept payments without a payment processor, and avoiding high credit card processing fees of about 6%. In comparison, paying with BCH only incurs a network fee that is usually below one cent.

“We have a support network on Whatsapp and Telegram” so “store owners can come to us with their questions,” Aaron continued, noting that shop owners have many questions about accepting bitcoin cash. He believes that this support structure sets his efforts apart from other similar initiatives, emphasizing that the first step is getting merchants to accept BCH before convincing more people to use it and considering other projects such as remittance payments. “So many things to do, we’re just in the very beginning,” he concluded.

To start accepting bitcoin cash, store owners simply download the Bitcoin.com Wallet which has now been downloaded over 4 million times. Merchants accepting BCH can be found on the Marco Coino map.

Another organization that relies on cryptocurrency to help Venezuelans is Eatbch. The nonprofit takes bitcoin cash donations and coordinates the purchases of ingredients to serve meals to people in six Venezuelan states. Eatbch celebrated its first year anniversary on Feb. 11. The organization also has a similar initiative in South Sudan.

During blackouts in Venezuela, Eatbch directs donors to visit Venezuela.Bitcoin.com to make donations. Funds sent to Eatbch can be easily tracked using the Badger wallet. BCH enthusiasts can also donate to the merchant adoption campaign in Venezuela. 100% of the donated funds will be used to help increase bitcoin cash adoption in the country through activities such as signing up merchants and educating them how to use the decentralized currency for commerce and remittance payments.

Victories in the war for cryptocurrency adoption in Venezuela may best be described as hard-fought, but lessons being learned by the local crypto community are plentiful. Regardless of how the political turmoil plays out, most every Venezuelan has learned the value of their money and now knows about cryptocurrencies, largely due to the Maduro government’s efforts to push the petro. Many of their lives have been touched personally by the efforts and projects like the ones listed above. It seems to be only a matter of time until crypto’s broad acceptance in the country finally arrives.

When do you think cryptocurrencies will finally be used by the mainstream in Venezuela? Let us know in the comments section below.

Bitcoin’s Software Has Been Rolled Back Before

When Binance lost $40 million to hackers this week, the crypto community discussed reorganizing the chain after it was suggested...