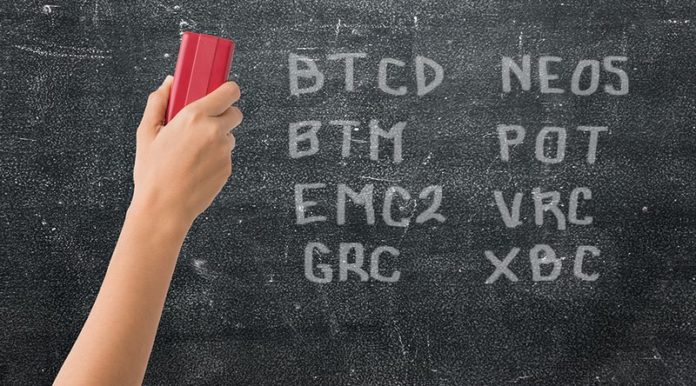 The announcement was made today, September 19, 2018. The coins will be delisted on September 25, 2018, and the exchange says that traders have 30 days to close out trades and withdraw the balances from their accounts. Poloniex says the move is part of a “continuous effort to improve the performance of the exchange and to better serve our customers.”

A spokesperson from Circle, the parent company of Poloniex, told Bitcoin Magazine that the coins were delisted in keeping with guidelines spelled out in Circle’s Asset Framework.

Circle did not specify what criteria the projects failed to meet. However, Poloniex’s volume has been slipping in recent months. Earlier in the year, it was the 14th largest cryptocurrency exchange by 24-hour trading volume, according to CoinMarketCap. Now, it sits at spot number 34.

Most of the coins that were delisted appear to be lesser-known projects. Several have seen huge drops in price from the beginning of the year. Still, getting delisted from a larger exchange like Poloniex can sound a death knell for small projects, causing a coin’s price to plummet overnight.

Poloniex announced they are delisting us from their exchange causing a crash in the price.Strange decision to make considering we are about to release our latest version.

And for others, the news appears to have caught them completely off guard.

1/2 – Given our long history of being listed on @Poloniex, we are just as surprised as you are by their announcement today to delist #potcoin from their exchange. We were given no communication or advance notice by the @Poloniex team & are still unsure…https://t.co/Wh4RPusobB

Einsteinium’s chief strategist, Ben Kurland, told Bitcoin Magazine the announcement came as a “complete shock.” He said they got the news just as they were in the middle of resolving a wallet issue with the Poloniex development team. “We were not notified ahead of time and given no warning this would occur,” he wrote.

Neos, the project behind NeosCoin, issued a statement about its delisting on Reddit. In response to one Reddit poster who said the delisting was likely a result of Neos missing “deadline after deadline,” Neos explained its project was just a “2-man show for the longest time.” The response provided a window into just how small some of these operations can be.

The delisting also comes at a time when Poloniex is trying to polish its act for regulators. Goldman Sachs–backed cryptocurrency startup Circle purchased Poloniex in February 2018, with the aim of “cleaning up” the exchange and turning it into an alternative trading system, or ATS, which would bring the exchange under regulatory oversight.

In March 2018, the U.S. Securities and Exchange Commission (SEC) issued a clear warning to exchanges that initial coin offering (ICO) tokens may qualify as noncompliant securities. Any exchange that lists securities needs to either register as a national securities exchange or operate under an exemption and set itself up as an alternative trading system.

The move requires Poloniex to register with the SEC as a broker-dealer and become a member of a self-regulating organization (SRO), such as the Financial Industry Regulatory Authority (FINRA).

Between a tightening regulatory environment and demands for increased security, exchanges delisting coins may become a more regular occurence in the months to come.

The future is bright for DigiByte (DGB), here’s why

Technology is not only evolving, but accelerating, throughout the world, and in turn, the world is becoming more interconnected than...