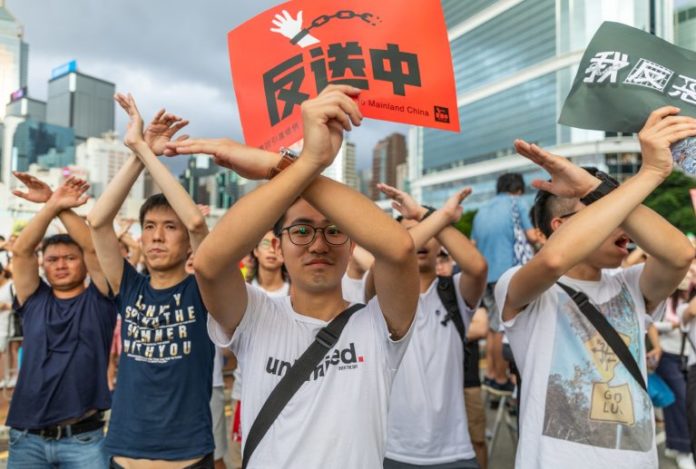 The Hong Kong protests started in June 2019 over a controversial bill and now after weeks of demonstrations, marching citizens are fighting for the future of Hong Kong. In the midst of all the activists protesting, digital currencies like bitcoin cash are being promoted as a way for people to remove themselves from China’s system.

It’s been more than 12 weeks of protests in Hong Kong that started with the 2019 extradition bill called the Fugitive Offenders Ordinance and Mutual Legal Assistance in Criminal Matters Ordinance. The bill claims to be an act designed to stop fugitive refugees from hiding as it would allow Chinese law enforcement to extradite anyone from Hong Kong to mainland China if they are accused of a crime. Many Hong Kong citizens fear the extradition bill could prompt the Chinese government to arbitrarily imprison anyone from the country. 130,000 demonstrators marched against the bill on April 28. After the Chief Executive of Hong Kong, Carrie Lam, showed she was ready to bring the 2019 extradition bill to legislature, over 1 million people protested in the streets on June 9. On the anniversary of the British handover of Hong Kong on July 1, a large number of protesters charged the Legislative Council. In August, activists stormed the Hong Kong international travel hub and the airport had to suspend flights for days.

Even though the bill was put on hold by Lam because of the intensity of the protests, the activists protesting demand more. Leaders of the protest have cited specific demands and the first is completely abolishing the extradition bill forever. The protestors also want the government to remove the changed classification for peaceful protests, which coincidentally is now defined as “riots.” The activists are also demanding an “independent inquiry” into the Hong Kong police force and the government must remove charges brought against protestors who have participated in past demonstrations. Lastly, those who are protesting and support the movement want a slice of independence from China. Protestors demand a better form of universal suffrage that does not stem from China and allows citizens to vote for leaders in a democratic fashion. Also, Hong Kong independence proponent Chen Haotian tried to incite a bank run on Chinese banks operating in the country last week. Haotian believes that a mass bank run in Hong Kong would hurt China’s financial system that’s tethered to the country’s economy.

In the midst of the Hong Kong protests, certain individuals and groups are pushing for cryptocurrency adoption in the area. One organization called Genesis Block has been distributing bottles of water and umbrellas to demonstrators protesting in the streets of Hong Kong. Genesis Block is well known for its cryptocurrency workspace in the Wan Chai district and was also one of the entities that mined some of the first bitcoin cash (BCH) blocks in August 2017. The cryptocurrency workspace promotes a range of digital assets but the peer-to-peer digital cash system BCH is promoted a lot more.

In order to bolster the crypto facilities within the region, Genesis Block has installed 14 cryptocurrency automated teller machines (ATMs) throughout the country. During large protests over the last few weeks, Genesis Block handed out water bottles to protesters which had a BCH logo and the bottle read “免费派水 (free water).” On the water bottle’s label next to the BCH logo, there’s a QR code that leads to the website Bch-hkg.com. The web portal is a Bitcoin Cash explainer and teaches people from Hong Kong how to download a wallet and use BCH to spread freedom. The translated message on the website states:

Bitcoin Cash (BCH) was created to achieve the original purpose of Bitcoin as a peer-to-peer electronic cash system — Bitcoin cash is fast, inexpensive and reliable as it’s medium of exchange and store of value.

Additionally, there are groups who are using cryptocurrencies like bitcoin cash to fund charitable efforts like the body of people known as Snowden’s Guardian Angels. In 2013, these individuals and families helped shelter the whistleblower Edward Snowden when many governments were looking to capture him. Snowden’s Guardian Angels were families who reside in Hong Kong and they are accepting bitcoin cash donations for their efforts. Another group that’s accepting bitcoin cash donations is the nonprofit organization Hong Kong Free Press (HKFP). The group is run by independent journalists who promise to be immune to commercial and political pressure. Independent journalism is valued during times of protest because reporters can tell the public how things are being perceived from a non-biased view. Bitcoin Cash proponents can support HKFP by donating to the nonprofit here.

There are also a few BCH accepting merchants in Hong Kong including the male-only salon Men’s Bash, Craft Brew & Co, the bookstore cafe Garden Meow, and Aerial Studios. Moreover, on August 23, the Hong Kong Bitcoin Association announced on Twitter that the department store Pricerite has begun accepting BTC via the Lightning Network. Pricerite will also accept litecoin (LTC) and ethereum (ETH) at its store in the Megabox shopping center. Apart from merchant acceptance, bitcoin cash trading has increased as well, according to swaps made on the Local.Bitcoin.com BCH marketplace. One trader has purchased BCH 195 times on the peer-to-peer platform using the stablecoins USDC and USDH. A few other traders from Hong Kong have completed 20-40 bitcoin cash trades on Local.Bitcoin.com over the last two months. There have also been a few instances where BTC prices have seen a premium in Hong Kong as spot prices on the exchange Tidebit have been $75-250 higher than the global average. For instance, the price of BTC today on Tidebit is 76,500 HKD, which is $250 higher than the average spot price worldwide. No one knows exactly how the Hong Kong protests will turn out, but it seems many people think it’s a great opportunity to spread the idea of a currency that’s not controlled by a state entity.