While DigiByte (DGB), as well as the entire cryptocurrency universe, has felt the wrath of Mother Market in the prolonged and slow bleed bear market that has been ongoing for six months now, DGB appears to have potentially found its footing, at least in the short-term and in the process, is feeling some much welcomed love in the form of price appreciation.

Although it’s premature to declare that either DGB or the vast landscape of cryptocurrencies are completely out of the woods just yet, nevertheless, the recent day’s action in DGB may be foreshadowing what’s to come for the entire space in the weeks ahead with DigiByte setting the tone.

That being said, let’s take a glance at the technical posture of DGB to perhaps garner some clues/evidence as to what may be in the offing in the not too distant future via the Charts below: 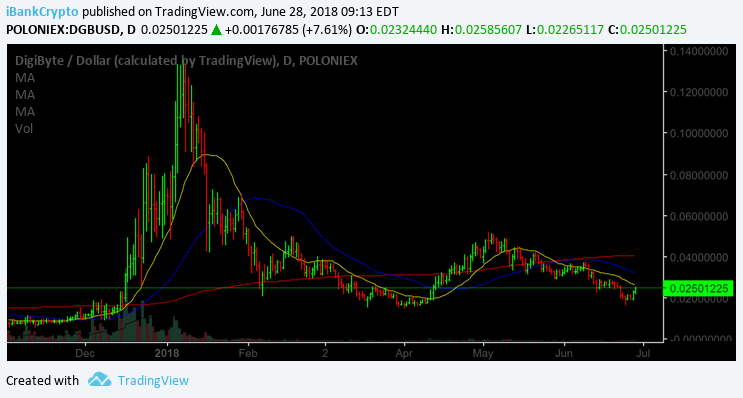 When observing the daily chart of DGB above, we can see that DigiByte recently tagged an important figure at the .017 level that acted as a ‘Floor’ back in April. Although DGB continues to trade below its 20; 50 and 200-day moving averages, depicting a poor technical posture, DGB has enjoyed a nice bounce off of that .017 level and now finds itself pressing its 20 DMA (yellow line).

Thus, from a short-term perspective, while DGB requires additional work, it has recaptured the .023 level, which acted as potential short-term support (now turned resistance) on the way down, which is a positive development.

In addition, if DGB can hodl the .023 figure in the days ahead and or better yet, put in some side-ways grind and consolidate the recent move into higher ground via forming a potential right shoulder of an inverted Head-and-Shoulders (H&S) formation, we may have the making’s of something to look forward to in the weeks ahead, should such development indeed materialize.

When zooming-out on the time-frame to the weekly action below, we can observe that DGB moved right into the low zone created in Spring of this year and thus far, has since put in a nice reversal candle. 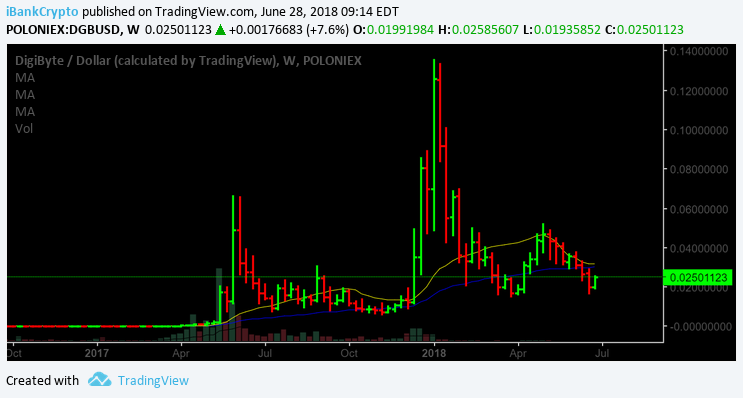 When we move out to the Monthly duration below, we can witness that DGB appears to have found its footing at prior recent support as well as buying interest evidenced via the recent push into higher ground off of the Spring-time lows (.015-.017 zone). 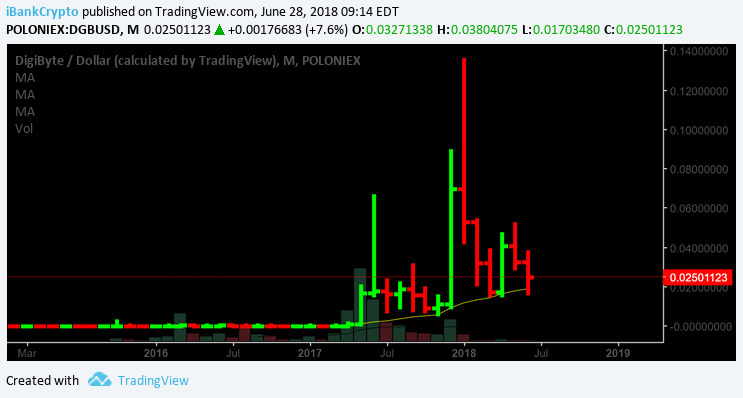 Moving forward, both investors/traders may want to utilize the following levels for further clues/evidence with respect to direction in the days/weeks ahead.

If DGB can begin to put in some sideways chop and consolidate the recent thrust (build cause/energy), such action would certainly be a positive and in the process, potentially build-out a right shoulder of a possible inverted H&S formation.

That said, if at any time in the days ahead, DGB can move top-side of the .0264 level and perhaps more importantly, the .03 figure, such action, should it materialize, would likely trigger a run to the .04 area, which represents a 60% move from current levels.

With respect to potential short-term support, both investors and particularly Traders may want to utilize the .019 level as your line in the sand, with the .015-.017 zone providing longer-term support.

Nonetheless, we may just be witnessing the very beginnings of a bottom for DGB in this long drawn bear and the forthcoming action in the days/weeks ahead should prove interesting.

Several weeks ago, a FinTech group called Nexo released an announcement in which it stated that Binance Coin (BNB) will...