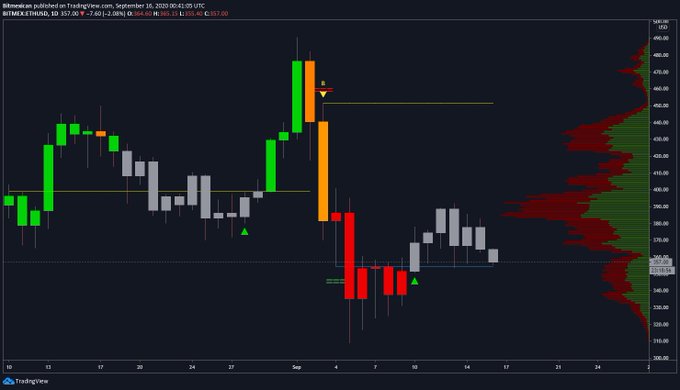 Ethereum Correction Could Cause Altcoins to Plunge Once Again

Somehow, it hasn’t been Ethereum leading the ongoing rally, it’s been Bitcoin. What’s weirder, ETH has been falling as BTC pushes higher — a market dynamic that hasn’t been seen in months.

Analysts think that this may not bode well for altcoins, especially as the second-leading cryptocurrency slips lower.

One cryptocurrency trader suggested that Ethereum dropping under $350 could result in another 25% correction in the altcoin market. Referencing the chart below, which shows that ETH is basically on the edge of a cliff, the trader said:

“Super important Level for $ETH: Currently $ETH and it’s ERC20 minions seem to be leading the market, would not be surprised to see another -25% day across the board for #DeFi tokens if $ETH trades under 350.”

For those that are unaware, altcoins saw a bloody correction last week. Most top coins, even those with popular products and a strong community, dropped 10-30% in the span of 24 hours as Ethereum plunged lower. There were some coins, even, that last 50% in the span of around two days.

Crypto analyst and economist Alex Kruger commented that this was likely the worst of the altcoin if crypto is truly in a bull market. He has since been proven correct as top altcoins have bounced since that day of carnage.

Saved by the FOMC?

While Ethereum is on edge, it may be saved by Federal Reserve Chairman Jerome Powell’s speech on Wednesday morning as the head of the FOMC.

The FOMC — or Federal Open Market Committee — regularly comments on interest rates and the economy.

Many believe that Powell may maintain his dovish stance, especially after his Jackson Hole speech.

Him doing so has the potential to boost risk-on assets, which benefit from monetary stimulus. Stocks, especially will rally if Powell maintains a dovish stance, boding well for Bitcoin.