Despite the fact that its CEO has taken a very public stance against cryptocurrency and blockchain in the past, JPMorgan is exploring the creation of a new blockchain-based system for working with debt.

In an exclusive conversation with Finance Magnates, a source from JPMorgan Chase has confirmed that the firm is developing a blockchain-based syndicated debt trading platform to be used internally. The platform will initially be tested in the firm’s commercial bank; if successful, the platform will spread to the firm’s other “sub-banks.”

At this point, the platform “is only a concept for JPMorgan,” the source explained, and is therefore “a good test without presenting to customers.” A team of 25 developers is working on finishing the platform’s proof-of-concept by July 30th; if JPMorgan Chase chooses to move forward with the project, full implementation of the platform will happen in December of this year.

Not Ethereum-Based, but ‘Ethereum-Style’

When a trade is made on the platform, fiat currency will automatically be traded for the platform’s native coin (which has no name as of yet.) Transactions will then be confirmed on an “Ethereum-style” blockchain before being converted back into fiat. The blockchain is reportedly modeled after Ethereum’s because of ETH’s “faster transactions.”

The source added that although the exact motivation behind JPMorgan Chase’s desire to create a blockchain system is unclear, the developer’s opinion is “they want to sell the idea of privacy and stay centralized.” On a practical level, this means that the firm will control all ledgers and nodes, at least initially.

JPMorgan’s Rather Cautionary Relationship With Blockchain

This new project is not JPMorgan’s first foray into blockchain. In mid-April, CNBC reported that JP Morgan Chase was in the process of testing a blockchain platform for “issuing financial instruments with the National Bank of Canada and other large firms” with the goal of streamlining internal banking processes.

JPMorgan Chase also reportedly developed a blockchain-based platform called “Quorum” over two years ago with a similar goal; the firm considered establishing Quorum as a separate legal entity in March of this year.

Despite JPMorgan Chase’s rather longstanding interest in blockchain, CEO Jamie Dimon was long recognized as one of the most outspoken critics of blockchain technology and Bitcoin in particular. Last September, Dimon condemned BTC as a “fraud”, a remark that he later admitted he regretted making. 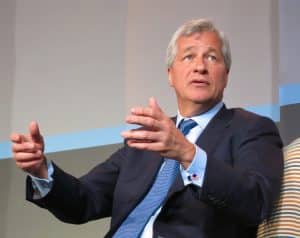 However, Dimon changed his tune this January when he began to recognize the technological potential of distributed ledger technology. “Blockchain is real,” he said. However, Dimon conceded that he’s “not interested that much in the subject.” Perhaps his attitude is changing.