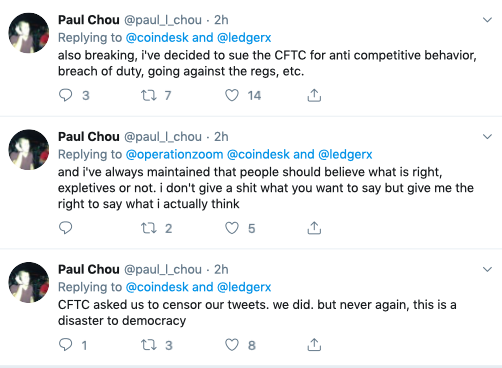 LedgerX CEO, Paul Chou, is really mad and apparently his company is not offering physically-settled Bitcoin futures contracts yet…

On Thursday LedgerX CEO Paul Chou sent out a series of tweets explaining the current LedgerX controversy and his decision to sue the Commodity Futures Trading Commission (CFTC) for what he calls ‘anti-competitive behavior’.

Chou alleges that the CFTC asked him to censor LedgerX’s tweets and he admitted that they did but will “never again, this is a disaster for democracy”.

The issue appears to have started on Wednesday when LedgerX announced that it had launched physically settled Bitcoin futures contracts that were accessible to retail and institutional investors.

Chou told media that “not only are they delivered physically in the sense that our customers can get Bitcoin after the futures expires, but also they can deposit Bitcoin to trade in the first place.”

Fast forward to Thursday and LedgerX was forced to retract this statement as the CFTC claims it did not provide a derivatives clearing organization (DCO) license to the firm.

LedgerX has requested that the CFTC amend its order of registration as a DCO, which limits LedgerX to clearing swaps, to allow it to clear futures listed on its DCM.

A quick glance at LedgerX’s trading data page also shows that options and swaps did occur on Wednesday, but no futures contracts were processed.

When asked about the discrepancy, LedgerX chief operations, and risk officer Juthica Chou admitted that LedgerX was not trading futures contracts yet.

She clarified that LedgerX’s previous statements regarding physically-settled futures were directly referencing the firm’s retail platform, Omni. According to Juthica Chou, Omni is live and processing swaps and options products and she said, “We’re still operating, we’re putting the product in front of retail.”

The CFTC did approve LedgerX as a designated contract market (DCM) in July but the firm still requires a DCO license in order to offer futures.

CFTC regulations (Title 17 part 39.3) stipulate that the agency has up to 180 days to make a decision on DCO applications. Chou said that:

[The CTFC] said to clear swaps and they said later that [we] should actually clear futures too and…we were waiting essentially for this amendments.

LedgerX appears to have assumed that a default approval would occur if the 180 day period passed without any decision from the CFTC. Juthica Chou said:

Chou also said that “we have email correspondence confirming that there were no additional items that they needed for the amendment.”

There’s a Light at the end of the Tunnel

An unnamed CTFC official commented on the situation and said this assumption is flawed as LedgerX requires direct approval in order to offer futures.

According to the official, “the absence of a decision does not constitute approval, and entity self-certification is not an option.”

On a more positive note, the same official said that LedgerX’s DCO application “appears to be in the very final stages of the approval process.”

This is a developing story which will be updated as more information becomes available.

Do you think LedgerX intentionally jumped the gun on announcing that it was approved to launch physically-settled Bitcoin futures? Share your thoughts in the comments below!

The post Failure to Launch: The LedgerX Controversy appeared first on Bitcoinist.com.

BitPay Suspends Services in Germany For The Time Being

Citizens of Germany will no longer be able to use BitPay after the payments processor pulled its service on the...