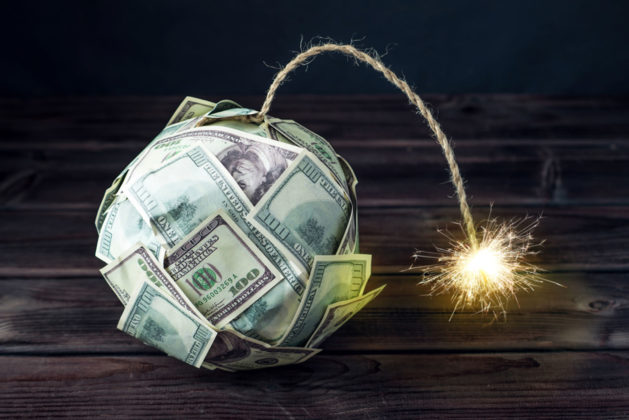 More cracks seem to be appearing in US financial markets as the central bank has to step in once again with a rescue effort. A spike in overnight borrowing rates has set alarm bells ringing as the economy teeters on a precipice which could lead to another recession. Good news for bitcoin?

Warning lights flashed red in a corner of the markets the public rarely notices yesterday. According to CNN, the New York Federal Reserve came to the rescue with a special operation aimed at easing stress in financial markets following a spike in overnight borrowing rates.

It has been the first such intervention by the Fed since the rocky days of 2008. The central bank attempted to ease pressure in markets by purchasing Treasuries and other securities with an aim to pump money into the system in order to keep borrowing costs from creeping above its target range.

Unlike bitcoin’s scarce supply structure, it is effectively market manipulation on a grand scale as $53 billion was injected into the financial system. The move demonstrates escalating economic tensions as the printing machines keep churning out the fiat. Managing director of fixed income strategy at Janney Capital Markets, Guy LeBas, added that markets are clearly stressed.

Bitcoin space observers pointed out that the Fed has been ‘producing money’ on a massive scale since the last crisis.

The Fed announced that it would continue flooding the markets today with an additional $75 billion repurchase effort.

The overnight repurchase agreements rate hit 5% on Monday which is up from 2.29% late last week, and well above the Fed target range set in July at 2% to 2.25%. This rate allows banks to quickly and cheaply borrow money, for short periods of time, often to buy bonds like treasuries. It was this market that collapsed in 2008 which is why the level of concern today.

“There is not enough cash in the banking system for the banks to meet all of their liquidity and regulatory needs. I’m not that worried, because the Fed will fix it.”

An extreme measure would be a return to quantitative easing which is the FED’s bond-buying program aimed at keeping borrowing rates low. As US national debt spirals out of control, an estimated $22.5 trillion at the moment, the economic turmoil does not look like it is going to improve at any time soon.

The Trump administration’s escalating war on trade will only spread the financial fears across the globe and safe-haven assets such as gold and bitcoin will ultimately become the beneficiaries.

What role will bitcoin play in the next global recession? Add your thoughts below

LINE—the instant messaging app, has officially launched a cryptocurrency exchange platform for its more than 80 million users in Japan....