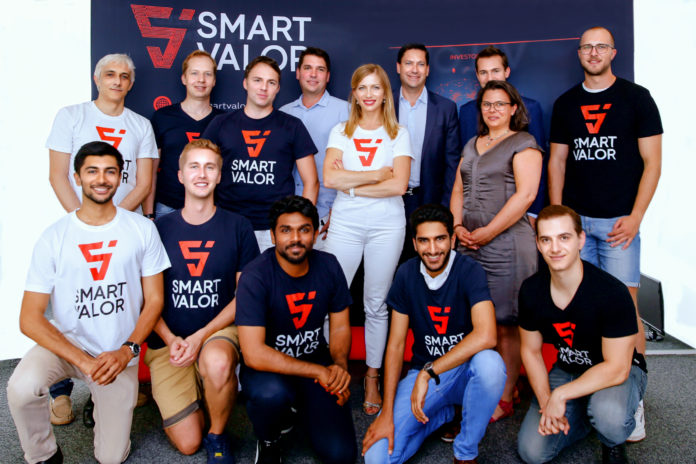 Zug, Switzerland – July 30th 2019, Today, Swiss-based SMART VALOR, a digital asset exchange, went live with an initial offering of 9 Crypto-Fiat trading pairs. It is the first exchange operated out of Switzerland and Liechtenstein to provide integrated offering of custody, trading and brokerage to a global audience of investors. Launched initially as part of the Thomson Reuters Incubator in 2017, the company today is one of the largest players in the Swiss Crypto Valley, the fastest growing global blockchain hub in the canton Zug hosting over 600 blockchain companies.

The assets available on the SMART VALOR platform will include cryptocurrencies and security tokens. During the go live, two major cryptocurrencies Bitcoin and Ether (Ethereum) are available in four fiat currencies: CHF, EUR, GBP and USD. Further carefully selected, attractive cryptocurrencies and blockchain-based tokens will be added on a monthly basis, helping investors to make the right choice in the new field of digital assets. Gradually, security tokens backed by real assets will be added to the spectrum of available assets along the regulatory approval process.

In addition to the exchange’s native cryptocurrency, VALOR, which is currently traded with significant volume on four cryptocurrency exchanges, the company benefits from a strong support on the institutional investor side, as several prominent VC funds have invested in SMART VALOR. Last month the Swiss VC fund Venture Incubator (VI) contributed additional 3.2 million CHF (3.25 USD), jointly with other Asian and US institutional investors, such as Tally Capital. The VI fund is managed by the leading Swiss venture capital firm VI Partners AG and has shareholders such as Credit Suisse, Nestle, Novartis, ABB and other global Swiss corporations.

“After 18 months of development we are excited to go live with a core element of the SMART VALOR platform – the exchange. This brings us a huge step forward to our vision of becoming the world’s first security token exchange for alternative investments” said Olga Feldmeier, SMART VALOR’s CEO.

On the technology side the platform boasts an ultra-high-performance architecture capable of processing one million orders per second, a seamless and fully compliant onboarding process and secure custody. The custody and wallets are provided jointly with SMART VALOR’s partners, established global leaders in crypto security – France-based Ledger and US-based BitGo.

On the regulatory side, SMART VALOR already won the regulator’s approval to operate as a Financial Intermediary in Switzerland as reported by Reuters last year. Additionally, SMART VALOR’s Liechtenstein-based subsidiary has also received approval from local authorities to operate a Crypto-Fiat exchange. The next milestone for the company is the receival of the MTF (Multilateral Trading Facility) license which will allow it to list and trade any type of tokenized securities including equity instruments, funds and derivatives.

The acknowledged angel investor Daniel Gutenberg, who is a partner at VI Partners AG, said: “The big vision of the company and exceptional track record of the founding team were the core reasons why we decided to invest in SMART VALOR. The SMART VALOR’s CEO, Olga Feldmeier, was from the very beginning shaping the regulation in the blockchain space and became one of the first to take on the real asset tokenization opportunity.”

The go-live of the exchange is accompanied by the launch campaign which gives initial users fee free trading and brokerage service during the first three months. Not surprisingly, the full capacity of the Early Access Program has been taken up by 5’000 users registered on the platform prior to today’s launch.

Another early investor in SMART VALOR, Stephane Pictet said: “Switzerland as the base is perfectly suitable to deliver a global alternative investment platform, like SMART VALOR, built on decentralized ledger technology. We have the worldwide largest wealth management centre and we have tech. Switzerland is leading the global innovation league table for years. Add here the favourable, neutral and principle-based financial regulation and you receive the best place in the world to build the fintech blockchain company.”

SMART VALOR is a financial technology company registered as a Financial Intermediary in Switzerland. Launched initially in the Thomson Reuters Incubator, the company builds the world’s first security token exchange focusing on alternative investments. Nominated as one of the top 10 tech SME in Europe by Forbes, SMART VALOR’s mission is to create the new financial market infrastructure which will democratize access to exclusive investment opportunities.

More information can be found on the official website at http://www.smartvalor.com