My History With CryptoCurrency

It seems as though everyone and their grandma’s know about Bitcoin today. With a price around $5600 at the the time of writing, and a price of only $60 as recently as 2012, it is easy to see why people wishing to invest are curious about the technology. I have been an investor in the cryptocurrency space since 2013. I first bought BTC for $60 back in 2012, and sold it after a few weeks for $120, only to watch it escalate to $600 mere days later.

Due to my interest in the space and active trading of the crypto, I was fortunate enough to meet someone I was buying BTC with who little to my knowledge was quite prominent in the crypto community, Joe Lubin. Joe Lubin is the Co-Founder of ConsenSys, a decentralized blockchain technology incubator. I was lucky enough to meet with Joe in the spring before the Ethereum presale began, and he was kind enough to tell me about his project.

As a result of this encounter, I have been following Ethereum and Ether pretty much since the first public information was available about it (find my initial coverage about it on SA in March 2016 here and here). I watched the pre-sale for .80 cents a share, and watched it climb to $16 before I bought in, and sold at various point between $50 and $350.

I have seen BTC whales make waves in markets, I have witnessed several hard forks, and I have studied and used cryptocurrencies for over 5 years now. While I am fascinated by the technology and excited about the use cases of blockchain, I see people with fundamental misconceptions about cryptocurrencies, their differences, and why they can make great investments. In this article, I will attempt to dis-spell some of this misinformation, as well as explain why XRP, the token supporting the Ripple network (owned by the company of the same name) is where investors should be putting their money right now. 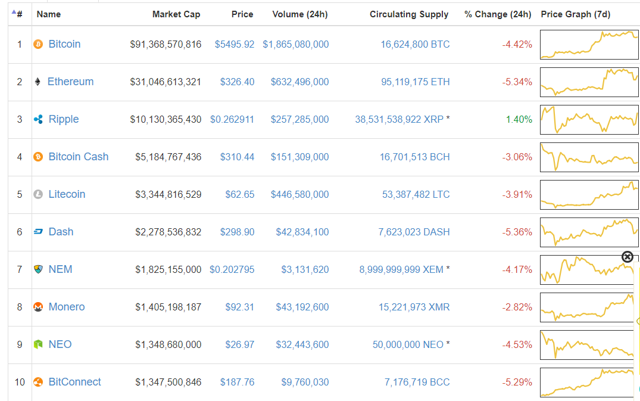 Firstly, I would like to make it abundantly clear that none of these cryptocurrencies are meant to be an investment vehicle. They are not like a bond, where you are able to receive interest on your investment, they are not like savings accounts, and they are not like stocks. In Bitcoins case, there is nobody even technically in charge of the technology, and nobody guaranteeing anything in relation to it’s worth, usability, or security.

The reason crypto’s can make a good investment is that as adoption increases and demand increases, if it outstrips supply it will cause an increase in price. Just like any monetary system, if you only have a certain number of tokens of exchange, as the value stored in the system increases, the value of each token must increase in a linear manner to support the new value between the total sum of units. In order to keep a price relatively the same, as the total value increases, so must the number of units in circulation.

So Why Has Bitcoin Seen Such Insane Returns?

The reason BTC in particular has performed so well over the last few years is simple: it has a fixed number of units that will ever be in it’s system. Essentially, as more people use Bitcoin, if they all store $100 in their own holdings, the price will have to go up for the entire market cap by $100 each time a new person enters the market. Similarly, if someone double’s the value they are storing in BTC from $100 to $200, the market cap will have to rise by that amount, despite the same number of units existing. This is known as a deflationary currency, and is the opposite of how the USD system works.

This is not too far off from a pyramid scheme in the sense that the sooner you buy in, and the higher up the chain you are, the more you stand to benefit.

While I am not bearish on Bitcoin for this reason, I still find it hard to fathom generous returns when each unit costs almost $6000.

It is worth noting there are several fundamental differences between BTC and ETH, of which I will briefly explain now before arriving to the main topic of this article, Ripple/XRP.

Differences Between Ether and Bitcoin

Ethereum was the first crypto to really differentiate itself from Bitcoin, and the first I really gave any attention to for this reason. Litecoin, for example, was more of less just a clone of Bitcoin, and DogeCoin was literally started as a joke with no real purpose behind it.

Ethereum, on the other hand, is an entire platform. For a deeper inspection of it’s differences to Bitcoin, please visit my blog posts linked above. What I will reitarate here, however, are a few key things:

It is this third reason that Ether is not as sure-fire an investment as Bitcoin, because it is not deflationary in nature. Without devoting any more time to Ether in specific, I would think it suffices to say that while I certainly experienced massive returns with Ether, and while I think it still has room to grow, all-in-all if you are not in already, you missed the boat. Once this technology matures and advances, it will stop experiencing the massive volatility it has undergone in it’s infancy.

Ethereum and Bitcoin are the two largest crypto’s by market cap today. We have seen that Bitcoin benefits as an investment vehicle from having a deflationary currency, and that Ethereum is poised to radically change the way businesses are funded, agreements are made and executed, and much more than we can really fathom. To borrow an analogy from one of my previous posts, Ethereum right now is like the internet before websites. It is hard to even fathom the implications of what this technology will transform over the next decade.

All this background now brings me to what we have all been waiting for: The next big thing.

The third largest cryptocurrency by market cap is Ripple, which is traded under the XRP ticker, currently hovering around a mere .26 cents a unit. XRP is backed by a company, named Ripple, that was started by several Wall Street finance executives in 2012. Ripple does not appeal to people who follow Bitcoin or Ethereum for their “revolutionary” nature and the possibilities that it could upend the banking system. In fact, Ripple is working with the banks. What Ripple’s initial implementation will be is as a payment network, like PayPal (NASDAQ:PYPL), Square, Apple Pay (NASDAQ:AAPL), Facebook Pay (NASDAQ:FB), or any other network you can think of. It works like Bitcoin by having a decentralized ledger to track and verify all transactions, and is backed by a central group held responsible. It is also capable of scaling exponentially larger in transaction volume than Bitcoin or Ethereum, and is capable of processing each transaction in mere seconds.

On top of it’s design supporting many transactions both quickly and securely, it is able to do so at a lower cost than the existing methods banks use today. As a result of this combination of offerings, Ripple is poised to be the primary service used to send some of the $500,000,000,000 remittance payments made each year. Currently, XRP’s market cap stands at $10.25 Billion, representing over a 48x increase if all the value of the remittance market value was stored in XRP at once.

One of Ripple’s biggest advantages of over Bitcoin in gaining this market is it’s distancing from the criminal black market that made Bitcoin it’s name. By being backed by traditional Wall Street types (and real people in general as opposed to the notorious “Sotoshi Nakamoto”) and not providing for a criminal use-case, banks are much more open to utilizing blockchain technology. Plus, banks are logical, bottom-line drive enterprises. If they can send money faster, more cheaply and with increased liquidity they would be crazy to say no. 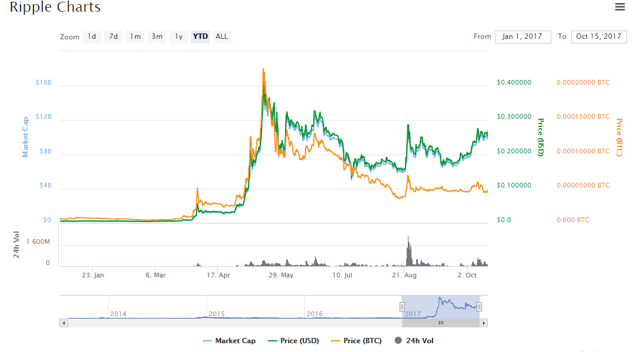 I believe we are at the tipping point for XRP. In recent weeks, Ripple has announced their 100th banking partner signed up with an intent to use their Ripple Network for sending payments, as well as the first official announcement of the first actual deployment of the network. Due to the fact that XRP, like Bitcoin, is deflationary in nature with a set amount ever going to be in circulation (100,000,000,000 units), as more value get’s stored in or even transferred through the Ripple Network, the price per unit will naturally increase. We are at the start of a snowball effect, where once one bank starts using Ripple, the average transaction volume will increase tremendously, as currently only speculative traders are buying and selling (or holding) XRP. Once all 100 of these banking partners come online, and the network is proven to be superior, many more banks will begin clamoring to sign up.

Coupled with a recent incentive program introduced by Ripple to expedite adoption, it seems as though the culmination of the last 5 years of progress by the company is poised to really take hold in the coming months.

Combined with uncertainty in the upcoming forks of Bitcoin with Segwit2x, BitcoinGold, and Ethereum’s aforementioned move from Proof-of-Work to Proof-Of-Stake, the perfect storm is brewing for Ripple to take off among speculative traders, institutional investors and bank clients.

Additionally, the law of large numbers dictates it is much easier for the price to appreciate from .25 to $1.00 than BTC to go from $6,000 to $12,000. With Bitcoin paving the way for blockchain, Ethereum paving the way for Enterprise use of blockchain, and Ripple taking the best components of each and combining it with connections to the finance industry, Ripple will surely provide at least 100% returns in the next 5 years for anybody buying in below .30 cents.

While Bitcoin and Ether are likely to provide additional gains long-term for those willing to buy and hold, their tremendous run-up has limited upside potential remaining and huge downside risk. Ripple, on the other hand, has quietly poised itself as the main contender to grab an enormous market, with potential to expand into IoT applications or other similar value transfer opportunities down the line. The fact that everyday consumers will be using XRP without ever owning or touching it themselves illustrates just how fast adoption could increase in a relatively short time as the Ripple Network comes online. Ripple is extremely difficult to obtain for the average investor at this moment, with not very many exchanges supporting it. This is the most obvious long-term winner in the cryptocurrency space.

If you wish to receive more information regarding cryptocurrencies such as Ether, XRP or Bitcoin, please take a second to follow me so you can be notified of future articles.

Disclosure:I/we have no positions in any stocks mentioned, and no plans to initiate any positions within the next 72 hours.

Additional disclosure: I am a long-term holder of XRP, and a trader of BTC, ETH and LTC.