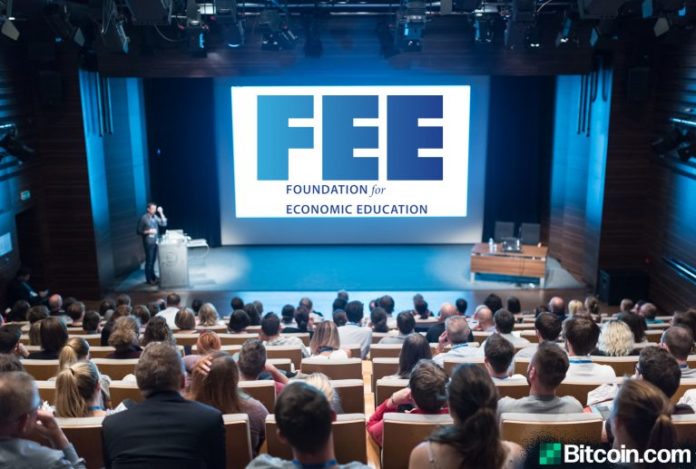 The oldest free market think tank in the United States, the Foundation for Economic Education (FEE) has announced the 501(c)3 educational foundation now accepts bitcoin cash (BCH) for donations. The libertarian organization promotes sound economic theory, publishes books and articles regularly on the benefits of a laissez-faire attitude, and hosts lectures and conferences that aim to encourage the philosophy of freedom.

The Foundation for Economic Education (FEE) is the longest-running American think-tank based on free market ideals and sound economics. Founded in 1946 the group was created by some of the smartest libertarian thinkers and economists of the time with individuals such as Henry Hazlitt, Leonard E. Read, Leo Wolman, and Fred R. Fairchild. FEE is solely dedicated to the “economic, ethical and legal principles of a free society” and the educational foundation provides a number of resources for those interested in learning the philosophy of liberty. The think tank is a 501(c)3 foundation and professors and parents have leveraged FEE for the last 74 years.

FEE has accepted BTC for a number of years and this week the foundation has revealed it is now accepting bitcoin cash (BCH) for donations as well. At the end of 2013, FEE received a massive 1,000 BTC donation ($6.9M) from Bitcoin.com’s Executive Chairman Roger Ver which at the time was worth over $1 million. At the time Ver made a bet that BTC would outperform the U.S. stock market by a specific time and lost the wager by being off by a few months. “ I’ve decided to donate 1,000 Bitcoins, that were worth only $10,000 at the time I made the bet, but are now worth well over $1,000,000 USD, to the organization that published the books and articles that allowed me to understand just how important Bitcoin would become,” Ver said at the time. The entrepreneur further stated:

That organization is the Foundation for Economic Education. By reading books, and essays published by this organization from such intellectual giants as Murray Rothbard, and others, I learned that those who want to control their neighbor’s activities through the violence of the state, are economically ignorant, morally deplorable, and will always fail to reach their desired goals.

Multi-Crypto Acceptance and Promoting Liberty in Times of Crisis

Now users can donate bitcoin cash to FEE as the foundation has opened its doors to multi-crypto acceptance. Donations go toward educational resources, the publishing of free market literature, and free online courses. Right now think tanks like FEE, Mises.org, and many others are needed more than ever because governments have continued to relentlessly oppress individuals. Just like the myriad of crisis situations that have taken place in the past, governments are using the coronavirus outbreak to steal people’s liberties. These ghastly members of society have caused much ill throughout the world and its been far worse than every deadly virus known to man. FEE utilizes core programs that produce student seminars, educator resources, online education, engaging videos and informative books about how a free society can benefit the world a great deal.

Donors can learn about FEE’s history and even review the organization’s finances for accountability. “[FEE] adheres to the strictest of standards in financial and programmatic transparency, earning the highest ratings from both Charity Navigator (four stars) and Guidestar (Platinum),” the foundation’s website notes. FEE’s resources have impacted the lives of millions of people and the organization’s strength shows there’s resonating effectiveness when it comes to economic freedom.

What do you think about FEE accepting bitcoin cash (BCH)? Let us know in the comments below.

Seven days ago, a crypto software developer announced a new web service called Signup.cash, which provides individuals and organizations with...