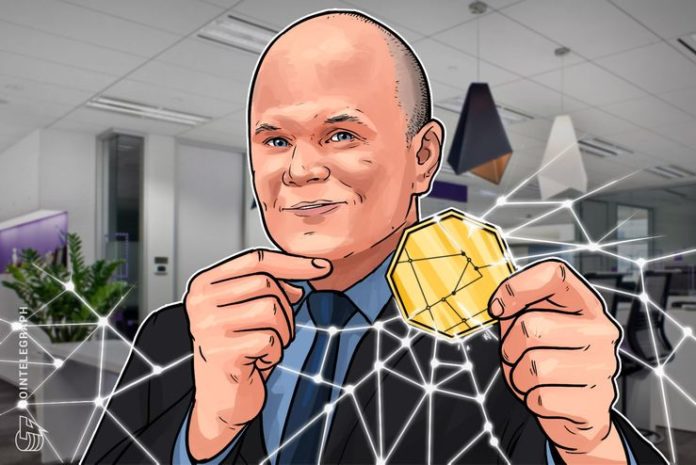 Novogratz also pointed out that the Bloomberg Galaxy Crypto Index (BGCI), which is designed to measure the performance of the largest cryptocurrencies traded in U.S. dollars, “retouched the highs of late last year and the point of acceleration that led to the massive rally/bubble.”

This is the BGCI chart…I think we put in a low yesterday. retouched the highs of late last year and the point of acceleration that led to the massive rally/bubble… markets like to retrace to the breakout..we retraced the whole of the bubble. #callingabottom pic.twitter.com/EasTBYgjSj

Speaking at the Beyond Blocks conference in South Korea in July, Novogratz predicted that many institutions will enter the crypto industry “in the next two to three years.” However, he noted that the mass adoption of crypto and blockchain technology will come no earlier than in the next five years, naming the increasing “cost of technical talent” as one of the main reasons.

Later that month, Galaxy Digital published its first quarter report for 2018, which shows $134 million losses with $85.5 million as an unrealized loss on digital assets. As of March 31, Galaxy Digital had $281.7 million in assets, of which $225.8 million were digital assets and investments.

Meanwhile, the market has rebounded, with total market cap having surged by more than $13 billion today. The top 20 cryptocurrencies by market cap are in the green, according to CoinMarketCap, while several of them are seeing double digit gains. Ethereum (ETH) has gained over 15 percent on the day and is currently trading at $211. At press time Bitcoin (BTC) is trading at around $6,490, up 2.26 percent over the last 24 hours.

It's no secret that Bitcoin (BTC) mining is an expensive business, and in more ways than one. Not only has...