The rapid rise in AI and computer intelligence has come with both innovation and destruction.

It seems that every week, a news release details a massive cybersecurity breach that has left its victims scrambling.

One type of attack that is quickly rising in popularity is the distributed denial-of-service (DDoS) attack. While not extremely complicated, it can wreak havoc on the target’s systems. The attack begins by breaching a single computer connected to a network. As access is gained to the first computer, the rest on the network are compromised quickly thereafter.

The compromised cohort then targets its victim–usually a server, network, or website–and floods it with requests, inquiries, and packages. As server traffic shoots through the roof, the system is oftentimes forced to shut down. This creates a vulnerability that hackers can take advantage of, while at the same time leaving the target offline.

Traditional centralized DDoS protection systems rely on local servers to have sufficient bandwidth to neutralize threats. This substantial bandwidth is also used to create and sell CDN (content delivery network) services to decrease load times for websites globally. Companies charge their customers a high premium for these services, billed by the GB. They are also vulnerable to threats themselves, as their centralized nature makes them susceptible specifically to DDoS attacks.

The advent of Blockchain technology has resulted in advances across many industries.

The Need for New Technology

A simple survey of recent DDoS attacks, take 2016 as an example, shows the glaring inadequacies of current protection systems. Traditional centralized systems require incredible amounts of bandwidth, storage, and processing power, each of which is passed on to customers in the form of high fees and surcharges. Sometimes, high fees are justified by high performance. But history warns that this isn’t the case in this instance.

The average corporation spends upwards of $5,000 a month on DDoS protection services. This high spend often isn’t worth the opportunity cost–on average a DDoS attack will cost a company $2.5 million in damages. Companies like Blizzard and BBC have been hit with massive DDoS attacks recently.

In the Blizzard attack, users were unable to login to play world renowned games like Overwatch and World of WarCraft. Not only did the attack cost Blizzard a pretty penny, but customers were not shy in voicing their anger at the server issues.

Gladius is working to roll out a Blockchain platform that will revolutionize the CDN service industry and offer users stalwart DDoS protection at a fraction of the cost. The key to the platform is its decentralized nature.

The added benefit is that the service itself will be faster because more nodes will be distributed throughout the globe, and so geoserving content and media will be closer and faster. In other words, every connection is a potential mini CDN.

The Centrality of Decentralization and Blockchain CDN Services

In order to understand why Gladius’ platform is so incredible, one has to first understand how typical CDNs work. To increase speed and decrease latency, and to minimize the distance between the visitors and your website’s server, CDNs store cached versions of content in predetermined geographical regions. For example, a user in Spain may be dealing with an origin server in New York City. However, that server has a local cache in Madrid, thereby rapidly increasing the speed at which the user can access content.

Gladius’ platform creates a network, or a marketplace, where users can pool resources together to create custom made DDoS protection plan. By allowing its users to rent out bandwidth and processing power, Gladius creates decentralized CDNs. Those that contribute bandwidth earn tokens, allowing them to create their own protection services or join protection pools based upon their needs and location.

Rather than drawing from a single, centralized server, Gladius users can draw on the collective strength from all users in their chosen protection pool. The old biblical saying rings true,” a threefold cord is not quickly broken.” In order to penetrate one of Gladius’ decentralized pools, the DDoS attack must shutdown down all of the decentralized servers. Since this will consist of hundreds, if not thousands of servers, the task is near impossible.

All transactions are verifiable and easily audited by all participants. Additionally, middlemen are cut out due to the decentralization–no outrageous transaction costs or surcharges are levied on consumers. Free market principles Gladius’ operations and transactions.

Gladius’ public coin offering begins on November 1, 2017 and can be accessed online via their webpage. The beta version with fully featured DDoS protection and CDN services is scheduled for March 2018. The full public launch, which includes the full platform along with full support and assistance, will take place in August 2018. Finally, Gladius expects to roll out the “bells and whistles” by December 2018, and update the platform as needed.

Time will tell whether or not Gladius’ proprietary Blockchain platform rises to the occasion. The odds are in its favor, however, as their decentralized platform offers several advantages to traditional centralized protection plans. Gladius’ platform is well suited to identify and eliminate DDoS attacks, demonstrating its ability to wield great power with great responsibility. 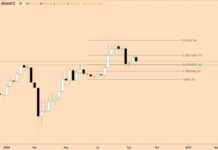 Bitcoin.com - September 25, 2020 0
The University of Cambridge and the school’s Centre for Alternative Finance has published the third “Global Cryptocurrency Benchmarking Study.” The 71-page in-depth study examines...