GMO Internet has released the latest monthly results of its Bitcoin mining operation. They show that the company mined 595 BTC, and 875 Bitcoin Cash in October, equivalent to around $3.8 million and $482,000 respectively.

This is interesting because the Japanese giant has never collected more than 287 Bitcoin Cash in the past, and in September, it took mined exactly 0.

GMO Internet, market capitalisation $1.7 billion, is one of Japan’s biggest corporations. As its name implies it is an internet-related business. It has nine listed subsidiaries, one of which is the most heavily-used foreign exchange broker in the world. It runs its cryptocurrency-related business via GMO Coin.

The corporation began mining cryptocurrency – specifically Bitcoin and Bitcoin Cash – in September 2017. Its stated goal is to break the Chinese monopoly on the sector. 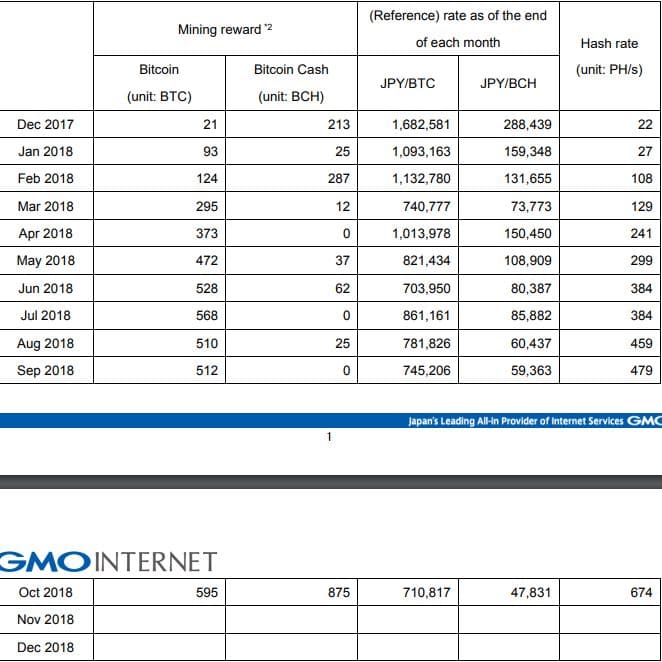 As Finance Magnates has reported in the past, and as you can see in the table which has been thoughtfully pasted above, the venture’s figures have been steadily rising during its year of operation.

In terms of coins mined, we can see that while Bitcoin mining has risen steadily (apart from one month), the amount of BCH collected is random, registering numbers between nought and hundreds on a monthly basis, with no discernible pattern. GMO has already marked 3 months where it mined more BCH than BCH, but these were, again, seemingly anomalies.

Last month, GMO did not mine any Bitcoin Cash, which prompted several media outlets to report that GMO had ceased mining it entirely. Last month’s takings suggest that this assumption was premature.

875 BCH is almost four times more than the company has ever seen before, so this is worth noting. The most obvious conclusion to draw is that BCH mining was very profitable in October. It is also worth noting that Bitcoin Cash is going through an identity crisis at the moment, with two separate camps threatening to tear the project apart. Forking the currency would create a brand new token, and all holders of BCH would find themselves magically in possession of an equal supply of Bitcoin Satoshi Vision (which is what the new coin is to be called).

Could this explain why the price of BCH has spiked at the beginning of November?

A long way to go

In terms of hash rate, GMO is is nowhere near challenging the biggest Chinese entities.

Its computing power available for mining in October was 674 petahashes per second (just for some perspective – one petahash is one quadrillion (1,000,000,000,000) operations). This was a 50 percent increase from last month. However, compared to the hashrate employed by major mining pools, it doesn’t even get near to the top twenty.

The top pool at the moment is btc.com, which handles over 9,000 PH/s. GMO Internet has stated that its ultimate aim is to reach 3,000 PH/s, and 800 by December. At the current rate of growth, it should meet the former target.

Decentralized liquidity network Bancor announced it had completed its partnership with EOS to provide cross-blockchain token swaps in a press...