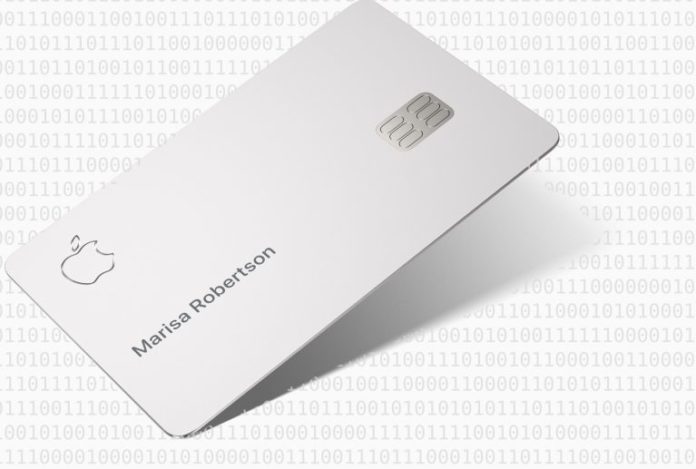 Cryptocurrencies cannot be purchased with the new Apple credit card according to the American multinational technology company’s recently published customer agreement guidelines. The Apple card’s restrictions indicate that the company’s partner, Goldman Sachs, is leery toward cryptocurrencies and other “cash equivalents” like lottery tickets and casino chips.

No Crypto Purchases With the Goldman Sachs Backed Apple Card

The technology giant Apple (AAPL) recently announced the launch of a credit card, which allows people to spend credit with an annual percentage rate (APR) between 13-24%. The California-based firm revealed the card will be released at some point this month, according to the firm’s third fiscal quarter earnings call. Some of the biggest selling points for the new Apple Mastercard include: virtual use, no annual fees, and no fees for transactions and penalties. Another interesting aspect is that the card will not feature the traditional Mastercard 16-digit number or CVV code. “Thousands of Apple employees are using the Apple Card every day in a beta test and we will begin to roll out the Apple Card in August,” Apple CEO Tim Cook revealed during the earnings call on July 30. Following Cook’s statements, the Apple card’s terms of service (ToS) were published via the Goldman Sachs’ website this week.

Two of the biggest issues that stand out for people who have read the customer agreement include the restrictions against jailbreaking an iPhone and restricting “cash equivalents” like cryptocurrencies. This is first addressed in the user agreement’s first section called “Important Definitions,” which essentially defines the terms used within the agreement. “‘Cash Advance and Cash Equivalents’ means any cash advance and other cash-like transactions, including purchases of cash equivalents such as travelers checks, foreign currency, or cryptocurrency; money orders; peer to peer transfers, wire transfers or similar cash-like transactions; lottery tickets, casino gaming chips (whether physical or digital), or race track wagers or similar betting transactions,” explains the Apple card ToS.

Being against “cash equivalents” is not all that different than most traditional credit ToS agreements, and banning things like lottery purchases is standard procedure for credit cards. Some skeptics believe it’s not that Apple wants to police what you can purchase, but that the blame likely falls on Goldman Sachs. Crypto purchases using credit cards already experienced pushback from banks and regulators after it was revealed that lots of people were using charge cards to purchase bitcoin and other digital assets during the last bull run. By the end of 2017 it was revealed that Capital One, Chase, Bank of America, Lloyds Banking Group, Discover, Virgin Money, and TD Bank Canada had all banned digital currency purchases. According to Capital One, the bank sees digital assets may lead to high risks of fraud and severe losses. “Capital One continues to closely monitor developments in cryptocurrency markets and exchanges,” the bank said back in 2018. “And [Capital One] will regularly evaluate the decision as cryptocurrency markets evolve,” the bank explained.

Despite Goldman Sachs involvement with Apple this time, the corporation had already had a long history with certain cryptocurrency restrictions. For instance, in February 2014, Apple had removed all the bitcoin wallets from the App Store including Blockchain.com’s Wallet, Coinbase, and Coinjar. After the wallet ban, Blockchain.com wrote a blog post which denounced Apple’s choice to remove the wallet application. “These actions by Apple once again demonstrate the anti­-competitive and capricious nature of the App Store policies that are clearly focused on preserving Apple’s monopoly on payments rather than based on any consideration of the needs and desires of their users,” Blockchain.com’s scathing critique stated. “[Blockchain wallet] had no customer complaints and a broad user base. The only thing that has changed is that bitcoin has become competitive to Apple’s own payment system. By removing the Blockchain app, the only bitcoin wallet application on the App Store, Apple has eliminated competition using their monopolistic position in the market in a heavy-handed manner.”

A few months later, after the Bitcoin community got riled up and some enthusiasts even filmed Youtube videos of themselves blowing up iPhones in protest, Apple silently let crypto wallet apps back into the App Store. However, in September of 2016, Apple started banning certain types of digital currency wallets that supported coins like dash and ethereum. The creator of the Jaxx multi-cryptocurrency wallet and CEO, Anthony Di Iorio, received word from Apple at the time that his startup was required to remove support for dash. Apple again had a change of heart later, and quietly allowed wallet developers to add a variety of digital assets. On June 8, 2018, Apple finally defined its cryptocurrency rules for the App Store and gave people better clarity on what kind of crypto apps would be allowed.

Apple did restrict initial coin offering applications, and mobile platforms that provided crypto mining applications using an iPhone’s chipset were strictly prohibited. Any ICO application would have to be established by: “banks, securities firms, futures commission merchants (“FCM”), or other approved financial institutions.”

As far as the Apple card is concerned, if the company or partner bank (Goldman Sachs) finds out that an individual has attempted to purchase digital currencies, the card could be shut off indefinitely. Apple may decline transactions “for any reason” and the company will advise the digital currency sales associates why the transaction was declined at the time of rejection. In addition to the cryptocurrency purchasing restrictions, the Apple user agreement highlights that if a user decides to modify, root or “jailbreak” their mobile device, Apple will disconnect the credit card from the device as it constitutes a violation of the customer agreement.

What do you think about Apple and Goldman Sachs restricting cryptocurrency purchases on the new Apple card? Let us know what you think about this subject in the comments section below.

Texas Orders Crypto Mining Firm to Give Back Investors’ Money

Crypto mining form AWS Mining was ordered by The Texas Securities Commissioner to give back the money they made on...