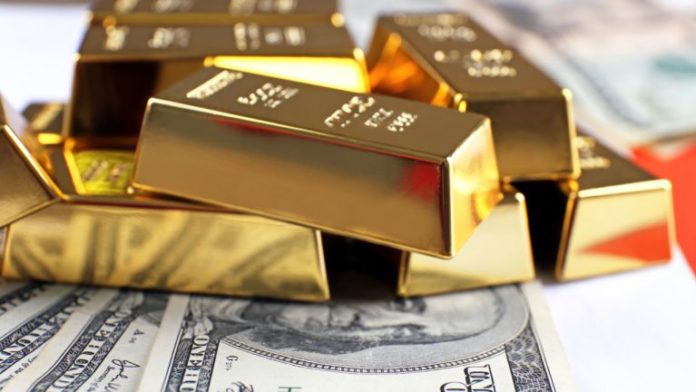 Goldman Sachs has warned that the U.S. dollar may lose its status as the world’s reserve currency. The investment bank is bullish on gold as fears over governments debasing their fiat currencies grow and real interest rates are pushed to all-time lows.

American investment bank and financial services company Goldman Sachs warned on Tuesday that the U.S. dollar is at risk of losing its status as the world’s reserve currency. Goldman Sachs’ strategists wrote:

Real concerns around the longevity of the U.S. dollar as a reserve currency have started to emerge.

The strategists explained that the U.S. dollar faces several risks. Citing that the debt level in the U.S. has now exceeded 80% of the country’s gross domestic product, they anticipate that the government and central bank may allow inflation to accelerate.

“The resulting expanded balance sheets and vast money creation spurs debasement fears,” they described, adding that this creates “a greater likelihood that at some time in the future, after economic activity has normalized, there will be incentives for central banks and governments to allow inflation to drift higher to reduce the accumulated debt burden.”

Other factors such as increased political uncertainty and growing concerns of another coronavirus infection spike also impact the dollar.

Meanwhile, the price of gold hit an all-time high on Monday, climbing to $1,931 an ounce, prompting a widespread expectation that $2,000 an ounce could soon be reached. Gold’s record-breaking rally even had Goldman Sachs revise its forecast to $2,300 an ounce in the next 12 months after the firm previously discarded its own forecast of $2,000. Gold is up around 7% over the past month while the ICE U.S. Dollar Index DXY dropped 3.7%.

Gold is the currency of last resort, particularly in an environment like the current one where governments are debasing their fiat currencies and pushing real interest rates to all-time lows.

Bitcoin has also been named as a safe haven asset for the current environment. Galaxy Digital CEO Mike Novogratz, for example, believes that with central banks mass printing money, it is “an amazing environment for both being long gold and long bitcoin.”

Even JPMorgan analysts wrote in a February report that cryptocurrencies should be in a portfolio “because they can uniquely hedge a yet-unseen environment entailing simultaneous loss of confidence in the domestic currency and its payments system.” Like Goldman Sachs, JPMorgan has also questioned the U.S. dollar’s status as a reserve currency, the company outlined in a report published in October last year.

Bitcoin is currently trading at about $10,978, after crossing the $11K mark the previous day. The cryptocurrency is up approximately 17% since last week and 54% since the beginning of the year.

Do you think the USD will lose its status as the world’s reserve currency? Let us know in the comments section below.