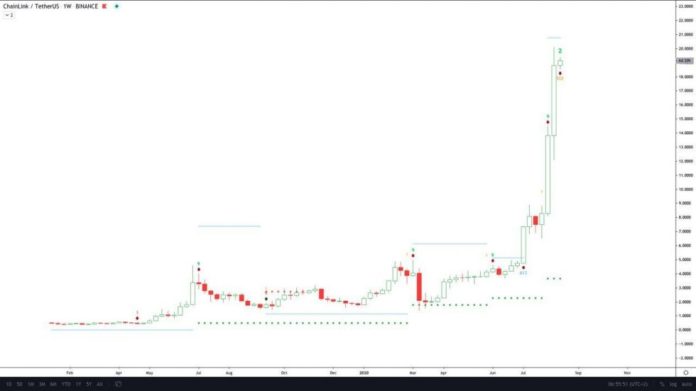 Chainlink May Be Preparing to Reverse Lower

There are signs that LINK wants to reverse lower after the show-stopping rally seen over the past month, which has brought the asset to $20. The asset at $20 trades at an all-time high, far above where it was just months ago.

According to a Telegram channel tracking signals formed by the Tom Demark Sequential, Chainlink is printing a reversal signal on a weekly timeframe.

The channel in question shared the chart below on Monday morning; it shows that LINK has formed a “sell S-13” candle on its weekly chart against BTC. This should precede a reversal to the downside.

The Tom Demark Sequential is a time-based indicator that forms “9” and “13” candles when an asset is poised to reverse or experience an inflection point in its trend.

As an important aside, Tom Demark Sequential “9” candles were also registered on LINK’s daily chart against the dollar. The same signal also formed against Bitcoin, further adding pressure to the leading cryptocurrency.

This isn’t the only signal suggest Chainlink will retrace. As reported by Bitcoinist previously, blockchain data firm Santiment found that there has been a spike of LINK deposits into exchanges. This suggests that there is an increase in selling pressure for the cryptocurrency. The last time LINK deposits into exchanges were this high, the asset found itself at a local top.

Bitcoin May Soon Steal the Show

Bitcoin undergoing a bout of volatility could add further fuel to a LINK downtrend.

This suggests that BTC will soon see a spike in volatility.

Analysts say that when Bitcoin undergoes volatility, all altcoins (Chainlink included) underperform. This is due to the fact that Bitcoin leads the crypto market on breakouts, so capital and attention is focused on it.