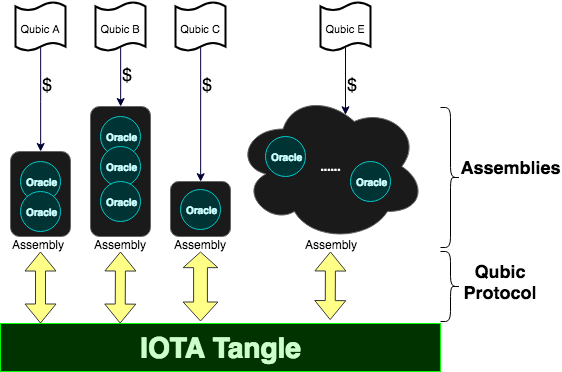 Qubic: Quorum-based Computations issued by formulas are too long to read slowly. After reading this article, I read the original article and gathered the points systematically in order to make understanding faster.

What is the Qubic protocol?

On the IOTA ‘s distributed ledger Tangle, in short, a protocol for realizing smart contracts . It is not a virtual currency.

* Because it is a rough analogy, I want you to keep it to the extent that I think this way now.

Qubic refers to the program / software written in the Qubic protocol, such as Smart Contract. Also they are written in the intermediate language ” Abra ” designed for ternary processors . Since Qubic is event driven type, it can do application of chain in a bucket relay of output with multiple Qubic.

We think of Oracle as minor and Assembly as mining pool first. IOTA Full Noderunning Oracle is especially referred to as Q node .
As a point of Assembly

The program (= Qubic ) executed for each Assembly is different, the result of obtaining a consensus (= Quorum ) by more than a certain number, taking a majority decision in all execution results in the Assembly obtained within the period (= Epoch) It becomes the final output of the Assembly.  In other words, Oracle and others in the same Assembly run the same Qubic at the same time and decide the final result by Epoch ‘s final majority vote.  Decide where the Qubic owner should have the program executed by the Assembly. Commission / reliability etc. are judgment materials.

Every Assembly is doing different things, but as a whole it happens all over Tangle.

Did you understand that Oracle is a minor, first of all, Assembly is not strictly a mining pool strictly.

For each Assembly , its lifecycle can be separated by a period of Epoch (cycle) as a unit. It is a period between the start time and the end time of the following execution stage .

We measure the suitability of an unspecified number of Oracle who applied to Assembly by the method of measuring the amount of resources of your choice. The result is used to calculate the share of voting power and commission.
Submitted all of the amount of resources from individual contributions (= Weighning Factor to calculate the), minute proportional to it (= Stake of) voting force and the commission is given after the Epoch end.

The period of actually running Qubic. Individual Oracle submits outputs in two to prevent Classroom Attack ( = cheat other output of other Oracle that finished processing earlier).

If 2/3 of Oracle issues a Commit Transaction and the same hash(result)is obtained, it requests a Reveal Transaction issue. Compensation is paid to Oracle saltwhose hash with its real value hash(result+salt)matches the Commit Transaction . Finally take a snapshot and Epoch is done. After the end, take over the previous Epoch information and restart from the PoR stage.

Quant is the number of processes involved in executing Qubic code. As Ethereum also increases commission in proportion to the complexity of the code, Qubic also contains a large amount of calculations and processing, the higher the Quant, the higher the fee.
Also, when talking about rewards from the perspective of the owner of the Oracle, the larger the Weighing Factor submitted at the PoR stage, the greater the reward distribution . Even with the same amount of work, not everyone in Assembly gets the same reward.

As a result of reasonable action selection by economists under this condition, the following equilibrium is created.

(About 1. If all the rewards are the same, we get 10 rewards by running ten Oracle on that device rather than getting one reward on a device that is ten times as powerful as the others. Then, the control power = composition of the power of the device is formed.
About (2). A powerful device will soon end Qubic’s processing, but you have to wait to receive the rewards until the end of Epoch, and you will lose when converting to hourly wage. In order to obtain the best, Epoch is required to finish almost at the same time as your own processing finishes, and it is required to shorten the waiting time until the end of Epoch as much as possible. In other words, it is a reasonable choice to participate in an Assembly that all participants have the same specification (amount of resources to be submitted at the PoR stage). Therefore, it is possible to prevent centralization due to concentration of computing power within the Assembly.

Such a design realizes a shared economy of computing power . For small devices (such as smartphones) you can run a light Qubic to earn money when you are not using it, or a big server center can run a big Qubic and earn a reasonable price.

As Qubic announced this time is still in the concept stage, this article will become useless as it becomes more concrete in the future. It would be great if you could read the article on the premise that you will add overlapping and editing, including that meaning.

IOTA:【入門】Qubicの要点をまとめてみた。 was originally published on qiita.com.The IOTA-News Community curates, examines, and summarizes news from external services while producing its own original material. Copyrights from external sources will be credited as they pertain to their corresponding owners. The purpose is to make use of 3rd party content or pictures as either allusion or promotional endorsement of mentioned sites. If you have a claim of copyright infringement with respect to material, please mail to support[at]iota-news.com. IOTA-News.com is a community run website and is NOT affiliated with the IOTA Foundation in any way.

The post IOTA: I summarized the main points of Qubic. appeared first on IOTA News.

The Crypto-verse has been rife with speculation that the Ripple (XRP) company will one way or another, partner with Apple...