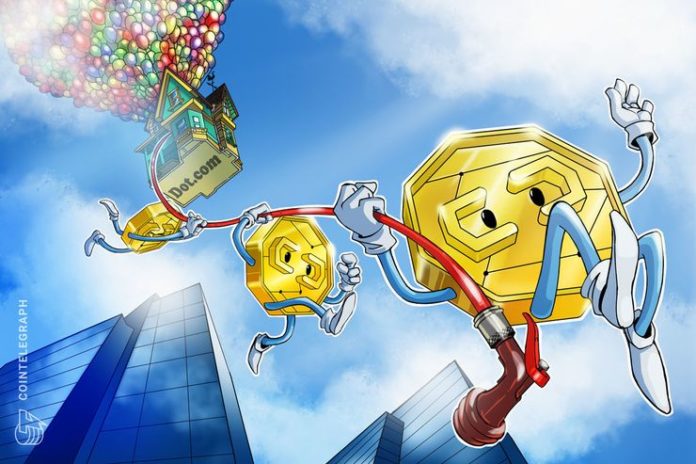 If you have ever encountered the word ‘cryptocurrency’ or ‘bitcoin,’ there is a solid chance that within the same paragraph or even sentence the word ‘bubble’ could also be found. Bubble has indeed become a shibboleth for crypto sceptics, especially after the market soared at the end of 2017, and the widening gap between valuation and intrinsic value of digital currencies and tokens became ostensible to many.

Yet not all bubbles are created equal: some bubble-framed references and metaphors tend to surface more frequently in media space than others. Perhaps the crypto’s most conspicuous historical analogy is the dot-com bubble of the early 2000-s – and quite understandably so. There is almost irresistible temptation to draw parallels between the burst of the booming market that emerged around early applications of a disruptive communication technology, and the highly volatile market that emerged around the blockchain ecosystem.

The recent slump in crypto prices has only made face similarities more pronounced. As Bloomberg reported earlier this week, VanEck’s MVIS CryptoCompare Digital Assets 10 Index, which tracks the prices of top ten digital assets, went down 80 percent compared to its January high. Symbolically, this development is now more dramatic than the Nasdaq Composite Index’s 78 percent nosedive at the height of the dot-com crash. The overall market cap dipped below $200 billion, shrinking by a factor of more than three from the all-time high. Does this mean that crypto market is doomed to follow the pattern of the early internet boom’s infamous explosion?

In the simplest terms, market bubbles occur when assets are traded at prices that by far exceed their fundamental value. Even though this can happen in virtually every market, tech industries, widely construed, are especially prone to such dynamics. Perhaps this is due to the human tendency to get excited over potentially disruptive technologies and then engage in speculative behavior fueled by this excitement. The technology in question does not necessarily have to be a digital one – the British ‘railway mania’ of the mid-19th century could serve as a good example of an ‘analog’ bubble.

The mid to late 1990s saw the rapid growth of internet-powered consumer markets. Sensing the ‘next big thing,’ entrepreneurs and investors flocked into the space, inflating each other’s ardor along with valuation of internet startups, which sprouted prolifically in the bull market. At the time, adding .com to a company’s name did the same to its stock as adding ‘blockchain’ does today. The Nasdaq Composite stock market index was the one that tracked many of those technology companies, and it was doing great – until a certain moment. At its peak in March 2000, the index reached the value of $6 trillion. A few years before, then-Chairman of the Fed Alan Greenspan famously observed that ‘irrational exuberance’ tends to ‘unduly escalate asset values.’ Once the dot-com bandwagon headed steeply downhill, the term ‘irrational exuberance’ entered just about every analytical reflection on what has happened.

The bubble burst. Expectations were set too high, the market was too overheated, and many of the dotcoms proved unable to come up with sustainable business models, let alone deliver services worth anything comparable to what investors poured on them.  In less than two years, more than half of the companies folded, while trillions of dollars of investors’ money just vanished. As the widespread narrative goes, the explosion of the dot-com bubble helped weed out numerous opportunistic players, thus clearing the way for those serious companies that had authentic ideas and a truly clairvoyant vision – today’s giants like Amazon and Apple usually among the primary examples. Ethereum co-founder Joseph Lubin famously characterized these events as ‘creative destruction’ and, along with many others, pointed out that the crypto market might be following the same trajectory.

Indeed, the dot-com bubble and the hypothetical crypto bubble share many striking commonalities, from powerful waves of irrational exuberance fueling their explosive growth to grandiose disruptive promise of their underlying technologies to trend lines describing the dynamics of their capitalization. As per Morgan Stanley’s March report, cryptocurrency price chart is broadly mirroring the Nasdaq index chart from the turn of the century; the number of bear cycles and rebounds, as well as their depth, are largely similar, as are the regularities in trading volumes. Some other very smart people have independently reached similar conclusions by using fancy statistical techniques to compare those two sets of data points. So, is it warranted that the painful burst is what invariably awaits us all? Or has it already happened in January, meaning that we are now living through the gloomy days of decay akin to the dot-com post-wreck 2001? The unsatisfying answer is that we cannot know for sure.

One thing to bear in mind is a number of important features that are still different between the two sets of circumstances. The most obvious one to look at is the size of the market, even though the relevance of this metric is debatable: whereas the Nasdaq Composite index amounted to six trillion dollars on its brightest day, the crypto market’s high-water mark is around half a trillion. At least we can rest assured that the damage to the overall economy in the case of collapse would be less dramatic than eighteen years ago.

A more consequential variable might be the pace at which the markets move. According to the same analysis by Morgan Stanley, in blockchain industry things happen 15 times faster than in the early internet sector. This is a product of a number of important distinctions between the two cases. One is that thanks to Twitter, Reddit, and Telegram, the information environment around crypto markets is richer, more transparent and more responsive to relevant (and not-so-relevant, for that matter) signals. Another point is that, unlike dot-com startups that were mainly supported by venture capital flowing from institutional actors, crypto markets rely on millions of retail investors globally a good deal. In sum, the ‘crypto bubble’ is a more diverse constellation of actors who have a wealth of information about the market, which is arguably more distributed geographically than any other. This looks like a set of structural differences that could yield outcomes that are different from what the story of dot-coms would predict.

In his thoughtful analysis published on Hacker Noon during the first downward tide of the year, Noam Levenson argues that the digital asset market has not yet reached the levels of adoption and capitalization needed for a proper ‘popping.’ Moreover, the dot-com-like crash might not even take place at all, and instead crypto markets would just bounce between bear and bull cycles until widespread adoption helps them entrench in a less volatile territory. The point is, we might well be past the crash, or simply in another loop of bear market on our way to the new heights. It is impossible to assert one or another with confidence, since there is only so much that can be learnt and extrapolated from the dot-com case – a case that is somewhat similar but not identical to the current state of the crypto market.

Does it even matter?

Ultimately, whether digital assets are a bubble or not is no more than a debate over terminology. Even within the crypto community, it is clear to the majority that the present-day tangible output that blockchain-based ventures can offer lags far behind the figures observed at the home page of coinmarketcap.com. It is also clear that these two values will have to realign at some point, similar to how it eventually unfolded with internet companies. The right questions to ask are what the timeline will be, and what the resultant configuration of the industry will look like; what share of today’s players will survive and which ones will eventually make it to the status of Amazons and Googles of the blockchain industries of the future; whether the industry will progress through a devastating crash or a relatively soft landing.

According to a radical viewpoint, nearly every market is a bubble, and a market’s progression is just a sequence of inflations and pops. The general sentiment among crypto stakeholders seems to be that the price drop is unavoidable at some point, and many of the less viable projects will have to go. Further still, even the stock market frenzy around potentially disruptive technologies might be viewed as an unlikely means of accomplishing a greater good, opening up the floodgates of capital for industries would otherwise seem too novel and risky: “Nothing important has ever been built without irrational exuberance.”

The World Economic Forum (WEF) foundation has outlined more than 65 blockchain use cases for solving the “most pressing” environmental...