The computer-driven currency known as Bitcoin has been through a few rough years. After peaking at $1,216 per Bitcoin at the end of 2013, conversion prices plunged all the way to $200 in just 16 months. Today, Bitcoin values have surged back above $1,100 and might set fresh all-time highs someday soon.

The Bitcoin boom in 2013 turned into a total rout. Is the currency headed for another meltdown, or should you take Bitcoin more seriously this time around?

What was the problem last time?

Four years ago, Bitcoin found itself in a global spotlight. Having started as a hobby project in 2009, the crypto-currency had surged from “basically worthless” to a value of hundreds of dollars per currency unit. Investors, speculators, and downright gamblers were trying to find ways to profit from this new thing. On the back end, hobbyists gave way to serious number-crunchers who used special math-processing chips to process the exponentially increasing number of bitcoin blocks.

What followed was a series of scandals. Critics called the Bitcoin increase a “bubble,” undermining trust in the currency. Perception is reality, or at least a significant part of the real value in tradeable assets that aren’t backed by gold reserves or governmental guarantees.

So Bitcoin prices started falling. The crash accelerated when a currency exchange known as Mt. Gox declared bankruptcy and shut down while managing some 70% of all Bitcoin transactions worldwide. The CEO of that exchange was later arrested and charged with embezzling $390 million from the service. Other exchanges shut their doors or suffered hacking attacks, often with a side of insider embezzling charges. Each embarrassment sparked another selling spree, and Bitcoin values plunged on heavy trading volumes. 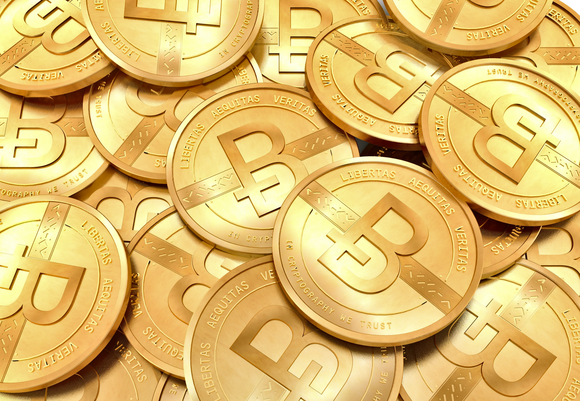 I could argue that the crash that started in 2014 was a necessary evil. It shook out several weak hands from the Bitcoin game, cementing a new set of leading trade exchanges and a heightened sense of security threats. We probably haven’t seen the last Bitcoin embezzling scandal yet, but then again, no other currency is entirely free from misuse and occasional scandals.

More importantly, businesses and government regulators have started to treat Bitcoin as a serious and valuable resource. Goldman Sachs (NYSE:GS) has invested millions in a Bitcoin transaction manager in the hope of making money on the transactional side of this thing. Other banks and financial powerhouses are planning to introduce Bitcoin-based exchange-traded funds at some point, assuming that the SEC would approve this idea.

The major credit card issuers may not be working Bitcoin itself into their services, but they are thinking hard about how to leverage Bitcoin-like technologies to improve their transaction management. That’s not a long step away from tapping into the Bitcoin market directly.

Elsewhere, you can use Bitcoin to pay for an increasing collection of real-world products and services. Microsoft (NASDAQ:MSFT) accepts it as payment for digital content and games in the online stores for Windows, Xbox Games, Xbox Music, and more. Want to subscribe to Sports Illustrated, Time, or Food Wine? Time (NYSE:TIME) takes Bitcoin as payment for magazine subscriptions. Computer hardware seller Newegg not only accepts the currency but also offered a 10% discount for Bitcoin-financed purchases for a while. And the list goes on.

Most of these retailers haven’t quite elevated Bitcoin to the full status of a real currency, like dollars or euros. It’s more like a new type of gift card at this point, managed by somebody else. Returns on Bitcoin-financed purchases are typically given in the form of store credit — or not at all. But even so, these are votes of confidence in the Bitcoin system, and these companies seem interested in riding or even shaping the wave of bringing it into common usage.

Bitcoin is still not quite as dependable as gold bullion or a roll of dollar bills, and not as useful in day-to-day use as cash or credit cards. But it’s much closer to that status than it was a few years ago. Assuming that the biggest and nastiest back-end scandals have already been dealt with, the next couple of years should see fewer massive value drops and a more stable Bitcoin value in general.

You shouldn’t pour your life savings into Bitcoin buys, of course. The risks may be smaller now, but they still can’t be forgotten. And currency trading is not a serious investment in the first place — even if you’re limiting your moves to respected world currencies like the dollar, the yuan, and the euro.

But a little bit of Bitcoin exposure could be useful and instructive nowadays. I have a tiny bit of skin in the game myself, having bought roughly one-fifth of a Bitcoin when it was cheap two years ago. The value of that tiny position has increased fivefold, even as I’ve used the funds for sending donations to Wikimedia and other online services. Not making me rich by any means, but it’s enough to keep me interested and informed.