In July, the U.S. Securities and Exchange Commission (SEC) moved in on the “Wild West” world of ICOs, which has sent the blockchain world reeling. Now, the Israel Securities Authority (ISA) has announced its own plans to form a panel to regulate Initial Coin Offerings (ICOs).

This week, the ISA announced that its chairman, Prof. Shmuel Hauser, has put together a committee to examine the regulation of ICOs. The committee will investigate the applicability of securities regulations on ICOs based on shared ledgers that are being offered to the Israeli public.

On July 31, the Israeli Bitcoin Association (IBA) made its own official public statement on the topic of ICOs. The IBA cautioned potential ICO participants that it’s important to understand the huge risks that exist in investing in ICOs.

This new world tends to captivate innocents tempted by the hope of getting rich quick. We implore the public considering investment in ICOs to treat the matter with serious consideration, out of a recognition that investors might lose all their money.

Regarding regulation, the Association cautioned that “the regulatory attitude towards this area is yet to be clarified. On one hand, this means investors will find it difficult to demand their rights, due to a lack of an appropriate infrastructure. On the other hand, it is possible that in the future there will be a regulatory intervention in a specific project or in the whole domain, which may hurt its continued operation.”

It seems that that time “in the future” for defined regulation is now in the works.

Udi Wertheimer, an Israeli blockchain researcher, read this latest announcement from the ISA in its original Hebrew and provided Bitcoin Magazine with his translation of the document.

“The announcement itself is neutral in tone,” Wertheimer told Bitcoin Magazine, “pointing out that the ISA is interested in encouraging new investment and funding options, and does not wish to stifle new innovations, but at the same time acknowledging that some ICOs turned out to be scams and others involved market manipulation, while yet others ended up being hacked in various ways, all leading to investor funds being lost.”

The document lays out its rationale as follows:

While considering the ISA’s policy in the last year on developing innovative funding models in parallel with keeping the interests of investors and warning from unregulated investments, it seems there’s a growing need of regulation in the field of ICOs. The committee’s job will include investigating this activity and the applicability of Israeli law as it exists today and as it may have to be adjusted, while reviewing their legal status in other countries.

“This is the first time I know of that Israeli authorities referred to ICOs directly. Israel is home to many ICOs, like Bancor, Kik’s Kin, Stox, CoinDash and others,” said Wertheimer.

He noted that the ISA recently cracked down on “binary options” companies, which tried to subvert security laws but were eventually identified as illegal. Even though these companies were registered elsewhere, the ISA forced them to shut down operations both in Israel and abroad.

Wertheimer also summarized the committee’s responsibilities as described in the document: 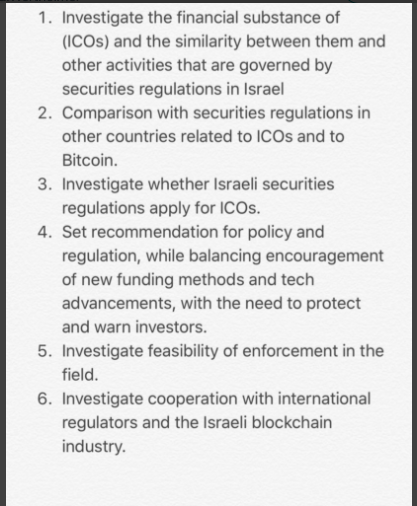 Wertheimer told Bitcoin Magazine: “Personally, I hope that regulators keep a hands-off approach in the near future, as I’m still hoping this field can still find a way to self-regulate. However, given the massive PR push by these ICOs both in Israel and internationally, I’m not surprised the ISA decided to take a close look.”

Meni Rosenfeld of the Israeli Bitcoin Association told Bitcoin Magazine that the Association has not yet formulated a stance on the ISA’s investigation.