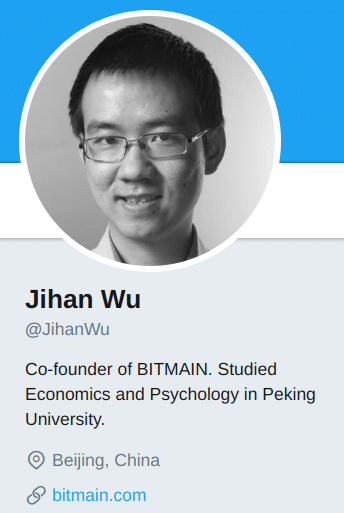 Who is Jihan Wu?

Jihan Wu is the co-founder of Bitmain. Leading perhaps the most profitable and integral companies in the industry, Wu is considered to be a fairly powerful and influential figure. Along with that power comes a lot of responsibility and controversy. Wu has proven himself a to be a shrewd businessman, defeating challengers and creating a vertically integrated and highly profitable behemoth of a company. He studied economics and psychology at Peking University. Before Bitmain, Wu was a financial analyst and private equity fund manager.

However, he is also at the center of the internet debate over Bitcoin vs Bitcoin Cash. Jihan Wu has been very outspoken about his support for BCH. His exasperation over challenging arguments and internet trolls has led to multiple public outbursts of profanity on social media. He has antagonized the developers of Bitcoin Core. Additionally, rumors speculate that Wu is using BITMAIN’s influence over mining hardware and mining pools to affect the outcome of the BTC vs BCH battle.

Due to this highly visible role and outspoken position on hot issues, Jihan Wu has become something of a villain in the Bitcoin community. Advocates for Bitcoin argue that Wu is unjustly wielding his power over the mining hardware and pools, restricting access to the tools Bitcoin needs to grow, and defying the open source and decentralized ethos of Satoshi’s vision. Others believe Wu is largely misunderstood, and he’s within his rights to exercise his influence toward a system he believes in. By the end of this article, you’ll hopefully know enough about Wu to decide for yourself.

While many cryptocurrency companies have enormous market caps and big budgets, few companies are profitable. Bitmain is an enormous exception to that rule. It’s perhaps the largest cryptocurrency industry company in the world. The company is privately held, so it’s difficult to say for sure, but CNBC estimates they made $3-4 billion in revenue in 2017 alone. That makes Bitmain as large as other mainstream chip manufacturers like Nvidia.

Bitmain wasn’t always so big. The company only started 5 years ago, in 2013. Jihan Wu met Micree Zhan, who was looking for investors for a startup in the blockchain space. Wu was the first person to translate the Bitcoin white paper into Chinese, and he was fascinated by Bitcoin’s inner workings. He pitched Zhan on the idea of building specialized hardware for Bitcoin mining. Together, they raised capital and started Bitmain.

Bitmain’s initial offering was an early application specific integrated circuit (ASIC) that offered greater efficiency in Bitcoin mining. Bitmain was far from the only company working on this problem, but Wu’s business acumen led to a smart decision. Most ASIC companies were founded and run by engineers who wanted to pack the most mining capacity into a single chip. Jihan Wu realized that overall capacity wasn’t the gold standard; it was efficiency. The early Antminer chips weren’t more powerful than the competition, but they used less electricity per hash. In the end, this made Bitmain’s ASICs more functional while the competition’s chips were more expensive to operate and scale.

Wu didn’t stop there with turning mining into a legitimate business model. Next, he focused on perfecting the delivery model and limiting downside for miners. Bitmain began to guarantee miners that Bitmain would give the option to buy back the hardware from the miner in the future if the miner put up more funds at the time of purchase. Think of it as mining insurance. If the hardware proved to be less profitable, due to market conditions, changing algorithms, or competing hardware, Bitmain offered loss protection via the buyback program. However, when the Antminer became the industry standard, Bitmain was just taking the buyback insurance premiums as gravy on top of the sales revenues.

Over a short period of time, Bitmain has come to dominate the Bitcoin mining space. Since the launch of Bitcoin Cash, Bitmain’s Antminers have also been the go-to ASICs for that currency as well. In the near future, Bitmain will launch the Antminer E3, the first Bitmain ASIC designed for Ethereum mining. If Wu’s success in Bitcoin is any indicator, Ethereum ASIC mining will grow quickly and likely be led by Bitmain.

Wu’s next move was the coup de grace to all Bitmain’s competitors. Instead of just selling the hardware, Bitmain began opening their own mining operations. With industry-standard hardware available at direct-from-factory prices, Bitmain mining operations quickly grew in share of the total mining hashpower. Bitmain also started running mining pools that now dominate the market.

This vertical integration of Bitmain’s business model has proved highly profitable. It makes Bitmain stable and difficult to attack. They make the best hardware and they also have a lot of control over changes on the Bitcoin network. Jihan Wu has taken a lot of criticism for taking this control to its extremes. He has threatened retribution against miners who operate in certain pools, like BTCC, or support certain software changes. Wu has even gone so far as to insinuate that Bitmain will track miners and not sell hardware to miners who go against Bitmain’s interests.

Jihan Wu has been a strong advocate for increasing or removing the 1MB block size limit on Bitcoin. In the early days of the debate, advocates argued for an update to the Bitcoin core software to enable this scaling solution. However, discussions broke down and various core developers, including many of the developers at Blockstream, were unwilling to make the change to Bitcoin Core. This prompted a hard fork of Bitcoin and the creation of a new currency, Bitcoin Cash with a larger block size.

Since the fork, Wu has been among the most outspoken advocates of Bitcoin Cash. He has openly derided Bitcoin, as well. Some have speculated that his advocacy for Bitcoin Cash goes beyond social media, with conspiracies about code or hardwiring in Bitmain’s Antminer chips that boost performance on Bitmain’s preferred software versions (ASICBoost) or allow Bitmain to control mining hardware remotely (AntBleed).

Wu’s advocacy of Bitcoin Cash has led to vitriolic arguments with strangers, VIPs, and trolls on social media. These arguments often devolved into name calling and obscenities, which generally isn’t perceived as a good look for the co-founder of a multibillion-dollar company. Perhaps Wu’s most famous meltdown is the fuck your mother tweet. Supporters have argued that Wu’s behavior is indicative of cultural differences and an inability to ignore Western trolls on social media. However, Wu did take an apology tour of the press, keeping things short and penitent in many interviews he has done over the past 6 months.

Jihan Wu has hinted at future plans for Bitmain in the near future.

Jihan Wu runs the most profitable cryptocurrency company in the world. His company, hardware, and miners have a global footprint and are an integral part of the cryptocurrency world as we know it today. Regardless of what you think about his opinions or public behavior, it’s hard to deny that Wu’s influence in today’s crypto landscape.