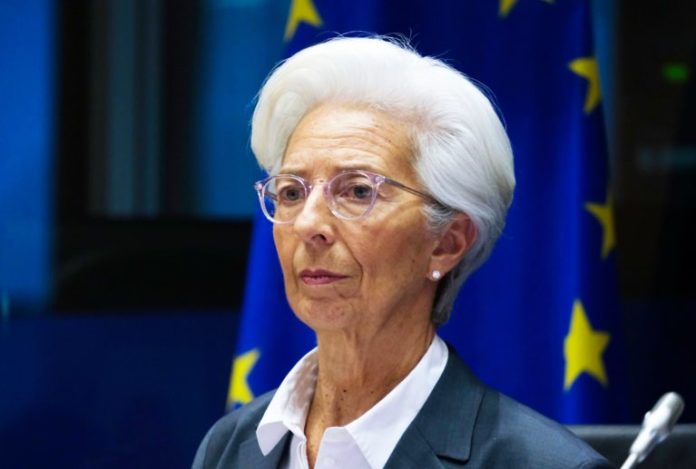 At her first press conference as head of the European Central Bank (ECB), Christine Lagarde outlined her plans to lead the ECB “ahead of the curve” in the field of digital currency. “There is clearly a demand out there that we have to respond to,” she said, referring to stablecoins.

Lagarde’s Plans to Put ECB ‘Ahead of the Curve’

New European Central Bank (ECB) President Christine Lagarde talked about her digital currency plans while explaining other monetary policy decisions at her first news conference as head of the ECB on Thursday. The press conference followed a meeting of policymakers in Frankfurt where the topic of central bank digital currencies was reportedly discussed. In answering questions regarding the Eurosystem’s digital currency, Lagarde said:

My personal conviction is that given the developments we are seeing, not so much in the bitcoin segment, but in the stablecoins projects … we had better be ahead of the curve if that happens. Because there is clearly a demand out there that we have to respond to.

Regarding stablecoins, she also noted: “we only know of one at the moment but there are others being explored and underway.” While the new ECB chief did not name the stablecoin she was referring to, an ECB Occasional Paper Series report published in August entitled “In search for stability in cryptoassets: are stablecoins the solution?” discusses a number of stablecoins including Facebook’s libra, tether, and nubits. Lagarde also revealed that the ECB has set up a digital currency task force and will accelerate its digital coin efforts, drawing on research by the eurozone’s central banks that have spent resources on studying central bank digital currencies (CBDCs). She proceeded to outline her plans.

“We will identify number one the purpose that we have with that,” the former International Monetary Fund (IMF) chief explained. “Are we trying to reduce cost? Are we trying to cut out the middleman? Are we trying to have inclusive finance at no cost? There’s a whole range of objectives that can be pursued. So I think we will start by doing that.” Next, she elaborated, “we will identify the technicalities of it all, which is not a given, particularly when you talk about the Euro system.” The new ECB president concluded: The ECB has also reportedly been looking into the prospect of issuing its own digital currency that would give the holders direct claims on the central bank. Several countries have similarly increased their efforts in this area following the announcement of the Libra project in June by Facebook, which was met with resistance from many regulators. The European Council and the European Commission jointly issued a statement last week stating that “no global ‘stablecoin’ arrangement should begin operation in the European Union until the legal, regulatory and oversight challenges and risks have been adequately identified and addressed.” Furthermore, the ECB indicated last week that it will develop its own digital currency if the private sector cannot make cross-border payments faster and cheaper.

At the aforementioned press conference, Lagarde also talked about the Eurosystem’s existing digital payment frameworks: TIPS (TARGET Instant Payment Settlement) and PEPSI (The Pan European Payment System Initiative). “We have several items that are completely digitalized that are not at the front end, and that the bank’s clients do not perceive as being in operation,” she asserted. “They deliver in digital terms the operations of clearing and settling, sometimes in one single operation,” she added, emphasizing that through these systems, “settlement and clearing are actually taking place instantly.” Noting that some countries are not using the systems, she affirmed that she “will continue to push” for their usage. Several countries worldwide have been studying the prospect of introducing their own central bank digital currency, as news.Bitcoin.com previously reported. China, for example, has said several times that it is working on a digital yuan. While the People’s Bank of China (PBOC) said that there is no timetable for issuing one, there are reports that the Chinese government is preparing to test its digital currency.

“I think there is also great interest outside our regional area. I know for instance that Canada, the U.K., other countries way beyond are certainly looking deeply into that to see if it makes sense, what purpose it serves and how we can best deliver on it,” Lagarde said at the Thursday press conference. Bank of England Governor Mark Carney has suggested that a global central bank digital currency might replace the dollar as the international reserve currency one day. Last week, the British Virgin Islands reportedly unveiled some details of its digital currency to be pegged 1:1 against the U.S. dollar for use within the territory.

However, some countries do not see the benefits of issuing their own central bank digital currencies just yet. In the U.S., Federal Reserve Chairman Jerome Powell and Secretary of the Treasury Steven Mnuchin said that they do not see a need to create a digital dollar, at least for the next five years. Nonetheless, the Federal Reserve is studying the costs and benefits of issuing one. The Bank of Japan has recently released a study on the legal impact of such currency but concluded that the bank is not looking to issue one currently. South Korea is another country that is taking a wait-and-see approach.

Do you think Lagarde will be able to lead the ECB ahead of the curve in the crypto space? Let us know in the comments section below.

Images courtesy of Shutterstock and Reuters.

The post Lagarde Sees Demand for Stablecoins, Plans to Put ECB ‘Ahead of the Curve’ appeared first on Bitcoin News.

US-China Trade Optimism Sends Stocks to ATH, is Bitcoin Next?