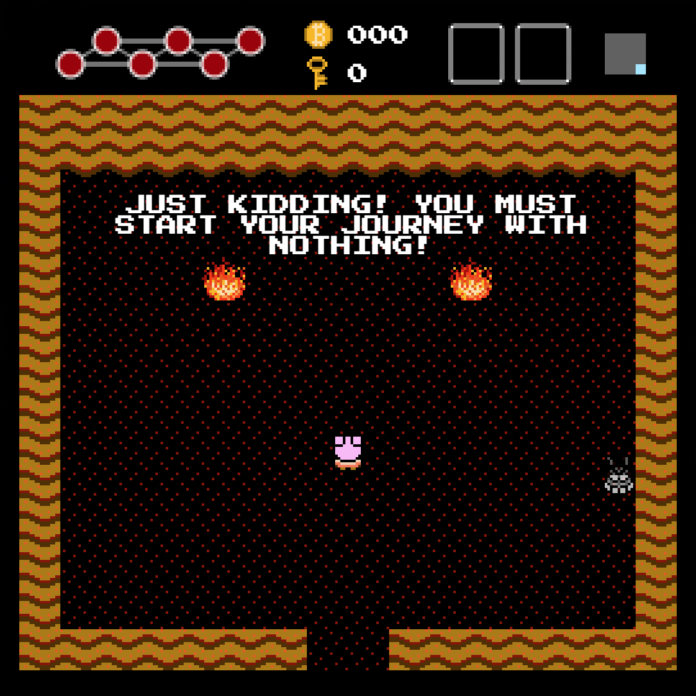 “Just kidding! You must start your journey with nothing!” recants a wizard-turned-demon as you attempt to collect your would-be first weapon in the game, a fork, in an abandoned cave.

This is how you embark on your journey in the “The Ledger of Szabo”: with nothing and no particular direction. The game’s initial interaction — as its name and gameplan would suggest — is an overt homage to “The Legend of Zelda,” the flagship game of the eponymous franchise which was released on the Nintendo Entertainment System in 1986. Thirty-three years later, its style and vibe are replicated and repurposed in the Bitcoin-facing “Ledger of Szabo,” a game whose difficulty, as presaged by the fact that you “Start your journey with nothing,” isn’t too far off from the original.

Upon booting up the game and roaming around, veteran “Legend of Zelda” players will immediately feel the familiar sting of nostalgia. An immediately recognizable landscape harkens back the OG Zelda game, complete with its own lost woods, labyrinths of hedge rows, caves and crannies and secret passageways accessible only by way of bombing cracks in the cliff sides. The weapons, though, are a bit different; the first one you come across, for instance, is a green candle, which spits a flame that you can use to extinguish the bears that roam the overworld — a weapon that doubles as a very fitting metaphor for the Bitcoin market.

Avid “Legend of Zelda” fans in their own right, the Blockade Games team members took inspiration from the series’ puzzle-solving gameplay. So they took this model and added a bitcoin-bent — one that offers actual monetary rewards to its players.

“For many of us at Blockade Games, ‘The Legend of Zelda’ is the game that inspired us to become game developers and software engineers,” Blockade Games CTO Ben Heidorn told Bitcoin Magazine. “Zelda is a game that, at its core, is driven by discovery and solving puzzles. There is no game more fitting for hiding logic puzzles with real-world prizes than one of the earliest games in the genre.”

Blockade Games’ puzzle roots run deep. Its founder, Marguerite deCourcelle, who goes by the handle coin_artist on Twitter, was the visionary behind a series of Bitcoin art puzzles. The greatest of these, The Legend of Satoshi Nakamoto, encoded the private keys for 5 bitcoin within the oil painting’s puzzle-infused illustration of a flame-licked chessboard, on which rested a dove, a sprawling creeper plant and a knight and queen set aflame.

deCourcelle took what she learned from these projects and instilled her artistic vision into the studio’s latest title. Unlike “The Legend of Zelda”’s logic puzzles, which net players digital rupees, new weapons or various quest items, “The Ledger of Szabo,” fittingly rewards players in bitcoin and ether. A total of eight puzzles have hidden away eight prizes, ranging from payouts of 0.1 BTC, 1.69 ETH, 13.97 ETH and 0.3 BTC, among others, for a total sum of 1 BTC. Once one of these puzzles is solved and a key is found, it will no longer be available to new players.

To Blockade Games, the game’s code-cracking intrigue is ideal for the puzzling world of cryptography that makes Bitcoin so difficult and perception-altering for people.

“The crypto space, and solving crypto puzzles, are inherently difficult — anyone who wants to participate and succeed needs to be willing to study, explore, learn and think about problems and solutions they’ve never encountered before. And for most people, they may have never heard of cryptography or thought about monetary policy before discovering Bitcoin — it can be world-changing!” Heidorn said.

The keys for the game’s treasure trove of cryptocurrencies are hidden all over the overworld’s dungeons and even in its source code. For example, signs bearing quotes from the Bitcoin white paper pepper the map’s landscape, collectively encrypting one of the eight keys.

If this has you reaching for your adventurer’s cap, better grab it quick because three of the eight keys have already been found. Players can keep track of how many have been found by pressing “T” on their keyboards. This opens up the Puzzle Status screen, which depicts the found prize keys as shards of the “Legend of Zelda”’s most popular iconography, the Triforce. Don’t worry, though. Once these prizes are gobbled up, you can still solve the puzzles that engendered them and play through the story. In place of the monetary rewards you would have received from each puzzle, for example, you’ll receive a non-fungible token (NFT) proving that you solved it.

To get started with the game, you’ll need to set up either a MetaMask, Portis, Fortmatic or Wallet Connect web wallet.

But Colin, aren’t those Ethereum wallets? Yes, dear reader, yes they are. To play the game, you need to buy an NFT which represents your character. You can also buy power-ups to aid you on your quest. These NFTs, of course, must be issued on the Ethereum chain, but the game allows you to buy them with ETH and BTC (for 0.05 ETH or 52,000 sats).

That’s right, sats. The bitcoin payment portal for the game is Lightning-compatible. Once the team at Blockade Games receives a paid invoice, they mint the NFTs directly to the player’s wallet, giving them the benefit of Bitcoin’s secondary layer and Ethereum’s ERC-721 standard for unique in-game collectibles.

This choice, along with including both bitcoin and ether in-game rewards, exemplifies Blockade Games’ nonpartisan approach to asset representation. When I asked them why they chose to not pick sides (for instance, they could have made the game entirely Ethereum-facing or left the NFT component out completely), Heidorn explained that each asset brings something to the table that the other does not.

Bitcoin, for example, is best used as hard money, while Ethereum’s smart contracts allow for unique in-game assets like NFTs.

“We believe that Bitcoin and Ethereum both play a fundamental long-term role in the development of cryptocurrency and decentralized digital assets,” Heidorn said. “We believe that while both Bitcoin and Ethereum function as money, Bitcoin has the momentum, security and stability that cements it as the future of the global monetary standard. However, it is inevitable that non-fungible digital assets, like decentralized game assets, will play a large role in the future of games and the overall digital economy, allowing people to trade not only money but ownership of digital property.”

Drawing on the team’s suite of blockchain-powered games, Heirdorn referenced “Plasma Bears,” one of Blockade Games free-to-play games, as another example of NFTs in use.

More Bitcoin Games in the Works

Indeed, Blockade Games has more where “The Ledger of Szabo” came from — in the way of both fun and funds. Its digital Pineapple Arcade, featuring more than half a dozen arcade games like “Welcome to Crypto,” “Hack and Dash” and “Coin-Man” (a “Pac-Man” clone), has plenty of digital enjoyment to offer.

And plenty more coin to offer as well. Between all of its franchise titles, Blockade Games has stashed away 17.5 BTC and 15 ETH, or just over $185,000 at current prices. As suggested by the arcade’s name, this small fortune came courtesy of the Pineapple Fund, an anonymous philanthropic fund that distributed over 5,000 BTC to various organizations at the peak of the 2017 bullrun (at bitcoin’s all-time high the fund was worth $86 million).

Stacked with sats as these games are, they are just a teaser for Blockade Games’ magnum opus: “Neon District,” an online “‘Final Fantasy’ inspired cyberpunk RPG” complete with NFT weapons, gadgets and characters that will run on the Ethereum blockchain.

“‘Neon District’ is focused on appealing to the mainstream gamer,” said deCourcelle, adding that the game might integrate Lightning for micropayments. But first things first, the studio has to make blockchain technology sexy and seamless for the average gamer and not what she called “the experimental community” currently surrounding blockchain gaming.

First announced in January 2018, “Neon District” is more than halfway through development, according to its website. When it launches, it will be the most complex blockchain game to date.

And Satoshi willing, it will include a blend of Bitcoin and Ethereum compatibility like “The Ledger of Szabo.”

$1B Bitcoin Transaction Traced Back to Multiple Huobi Addresses

About $1 billion worth of Bitcoin was moved yesterday in a single transaction, sparking reactions on Twitter and other social...