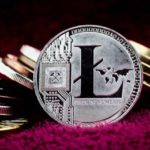 Today, we will be analyzing past price trends and looking at market opinions in order to compile a Litecoin price prediction for the month of October 2019.

Litecoin was founded in 2011 by Charlie Lee, a former employee at Google, to create a version of Bitcoin that was faster and more cost-effective. The coin was forked from Bitcoin, having similar features, but with added improvements to its scalability and speed.

Litecoin implemented pioneering technologies such as Lightning Network and SegWit before Bitcoin. The team behind the coin is working towards integrating atomic swaps, which are a new technology that enables direct communication between two blockchains and facilitates the direct exchange between Bitcoin and Litecoin and vice versa.

While Litecoin is based on a Proof of Work algorithm like Bitcoin, LTC uses Scrypt hash function instead of SHA-256. The coin also has a total mining supply of 84 million, which is four times more than the total supply of Bitcoin, that is 21 million.

Litecoin network generates new blocks at a much higher rate than the Bitcoin blockchain, with a new BTC being generated every 10 minutes, and an LTC block having an average creation time of 2.5 minutes. This means that the transaction times are four times faster, cheaper, and with reduced transaction queues.

Litecoin is often seen as the silver to Bitcoin’s gold, as the coin was designed to be more accessible than its parent coin.

The coin is not just used for trading and transferring funds, as many different online and offline businesses around the world have started using LTC. Some notable partnerships established by the Litecoin foundation include Travala, CoinGate, CoinPayments, JM Bullion, Miami Dolphins, TokenPay, WEG Bank AG, UFC, BlockCard, LoadWallet, Celsius Network, TravelbyBit, and many others. Litecoin is featured on dozens of top crypto exchanges, such as Bitfinex, Huobi, Binance, Coinbase, Kraken, and Poloniex.

Litecoin debuted the month at $56.12 and experienced an increase towards $57.19, but it slowly went back to $56 values before closing the day. October 2nd opened the day at $56.30, and the coin continued to fluctuate between slightly above and below $56 values up until October 4th, when it touched $57.30 values toward the end of the day. October 5th briefly tested the $57 resistance level but failed to maintain this value, closing at $56.82. The next day, Litecoin touched $57.03, but it continued a descending trend throughout the day, with its lowest being $54.89. October 7th got back to $55 levels and skyrocketed to $58.38, with the coin closing at $58 levels. 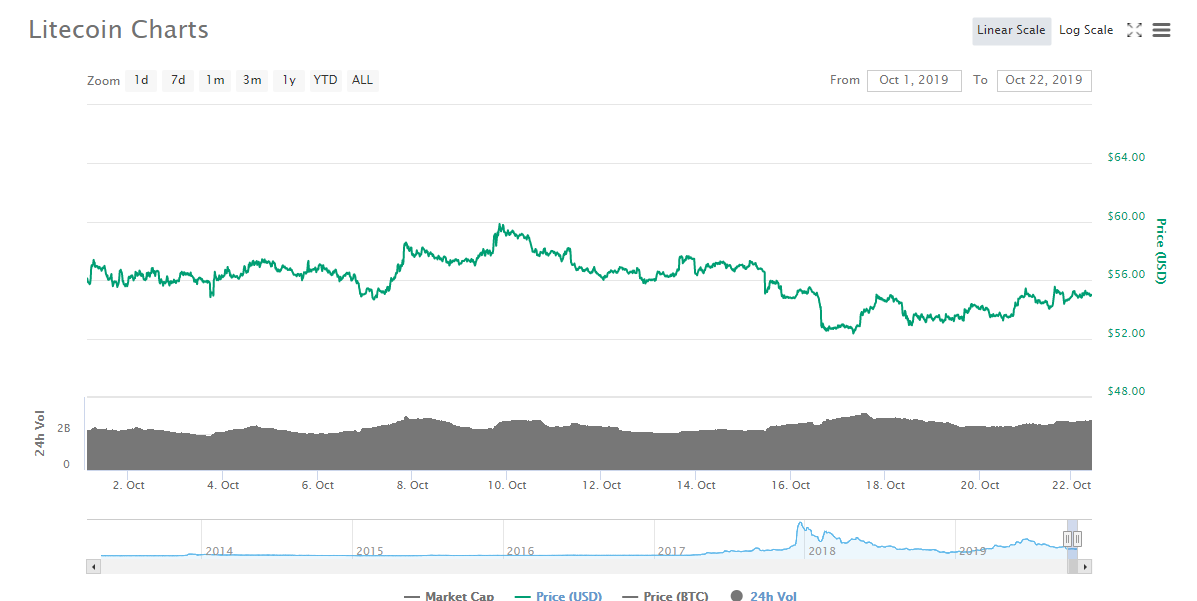 On the 8th of October, Litecoin fluctuated between $57-58 levels, breaking the $56.80 resistance areas overnight trading through a bullish trend underway. The following day, Litecoin started trading at $57.15 and succeeded in surpassing the $59 mark, with the highest value being $58.57. October 10th opened at a price of $59.42, but could not keep this value and closed at $57.86.

October 11th had an opening price of $57.78, slowly descending towards its closing price of $56.22. The following day was rather stable, as Litecoin traded within $56 levels. Litecoin continued trading with the $55-$57 range the next week until October 16th, when the coin dipped to $52.71.

The Litecoin Foundation recently got involved in philanthropy by partnering with UNICEF Kid Power, an initiative that will “enable financial empowerment in the Classroom.”

Another big development for Litecoin happened this August, when the blockchain experienced its second halving process, reducing the block reward from 25 LTC to 12.5 LTC. This event obviously caused a stir in the crypto community, with the director of blockchain analytics firm Messari stating that some investors might leave the LTC trading scene after their mining incentive halved.

October has been a pretty busy month for Litecoin, as developers have revealed at the start of the month that Litecoin Core, the most popular full node implementation of Litecoin, will soon have its next major release. Other announced developments include a new Bitbox hardware wallet, a Mimblewimble extension proposal, and a partnership with the San Diego International Film festival.

A couple of months back, Litecoin announced that it will be introducing Confidential Transactions to solve the coin’s fungibility problem. This implementation will give Litecoin its own separate identity from Bitcoin. The Mimblewimble Protocol will take part in the process of making Litecoin fungible, private, and scalable.

There are many crypto forecasting websites that have made their own predictions regarding Litecoin’s price for October 2019. To help you get a better grasp of the market opinion, we have featured some of these predictions:

Poundf.co issues daily, weekly, and monthly predictions for Litecoin. The site forecasted that for October, Litecoin will have an opening price of 59.61 USD. They also predicted that the highest value is expected at 59.61 USD, with the lowest at 46.65 USD. The month’s average price is estimated at 54.43 USD. Litecoin is expected to close the month at 50.54 USD, change for October -15.2%.

30rates predicts that Litecoin will have on the last day of October a minimum price of $49.0, and a maximum of $56.4, with a closing price of 52.7 dollars per coin.

With this, we conclude our Litecoin price prediction for October. We hope that the information we provided will be of help in your future trading endeavors with LTC.

In a normal world savers are expected to receive compensation for giving their money to the bank. Instead, due to...