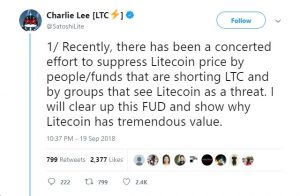 After months of speculation, rumors and criticism that have seen the price of Litecoin (LTC) take a hit, founder Charlie Lee has hit back. Taking his arguments to Twitter, the entrepreneur outlined his version of the truth and what’s really going on with the seventh largest cryptocurrency on the market. Kicking off his 11 FUD Falsehoods, Lee believes that LTC price charts have been deliberately suppressed by short sellers and those that see the project as a threat. Since the start of 2018, the Litecoin price in dollars has taken a tumble. From a high of more than $300 at the start of the year, it’s currently trading at $57 on the live LTC price chart (September 26). Does Charlie Lee think we should buy Litecoin?

While Lee may have a point, it’s worth noting the bearish trend that’s swept across the industry. Everything from Bitcoin (BTC) to Ethereum (ETH) has fallen from grace since the hype of 2017 started to subside. Nonetheless, Lee feels that, despite it being easier than ever to buy Litecoin online, people aren’t respecting the project because of misinformation. Of the 11 points raised in his recent Twitter rant, two should be of interest to short and long-term investors.

The first point that seems to have buoyed the price of LTC in recent days is security.

“Litecoin has one of the most secure networks of all altcoins. Litecoin has over $150MM of ASIC hardware protecting it. Litecoin dominates Scrypt mining by far,” Lee tweeted on September 19.

Although security is a constant issue, 2018 has seen a number of high-profile projects fall victim to hackers. Ethereum spammers managed to cause a logjam in the network over the summer, causing processing fees to soar and processing times to reach painstaking levels of slowness. In a similar vein, the price of EOS took a hit when a token hack saw scammers use fake tokens to make fraudulent purchases. No blockchain is 100% secure, but Lee’s tweet is confirmation that Litecoin is at least facing the situation head-on.

For those looking short, the tweet appears to have struck a chord. A 2.64% 24-hour upswing on September 26 suggests the announcement has helped the price of Litecoin rally. An upside of $60 might be too strong at the moment, but a downside of $55 would see LTC trading higher than it has done for much of September. In the long-term, Lee’s point about Litecoin being accepted by 200 payment processors should go someway to proving its utility as a crypto. In practice, only BTC is used by more companies and processors. Based on this, those looking for future gains do have something concrete to pin their hopes on.

Litecoin is far from a mainstream product. However, it has the potential to become one. That could be enough to boost the LTC share price over the coming years. Will it break the $100 mark any time soon? Probably not. However, Lee’s tweets have shown he still has a passion for the project, despite selling his entire holding back in 2017. That alone may give the bulls a reason to charge at Litecoin.

Is xRapid the biggest hype job in the crypto world? Despite Ripple being one of the most active companies out...