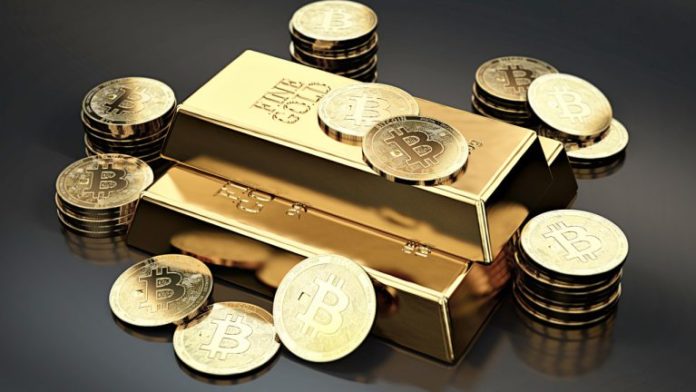 U.S. investment bank Oppenheimer’s analyst says gold is “extended” and has “run up a bit,” bringing attention to bitcoin instead. He sees the cryptocurrency reversing its downtrend from the $20K peak, benefiting from the dollar’s weakness.

Oppenheimer Analyst on Bitcoin vs Gold

He explained: “We’ve been recommending gold as a way to play the expansion of the Fed’s balance sheet … It’s actually the high momentum commodity, it ranks highest above all commodities out there in terms of momentum.” While pointing out that gold is “extended” and has “run up a bit,” the analyst affirmed, “We do recommend sticking with it.” Nonetheless, he added:

I think it’s worthwhile to highlight bitcoin instead which isn’t as extended … Bitcoin is reversing its downtrend dating back to its 2017 peak. If you are a long-term holder, this is the type of action you’d like to see.

Bitcoin is currently trading at about $10,970, having risen 17% this week and 54% this year. Its price is still well below its December 2017 peak of nearly $20,000. Wald noted that the cryptocurrency’s recent breakout is setting up for more gains ahead and bitcoin’s long-term trendline suggests it has plenty of room to run. Meanwhile, the price of gold has hit record highs this week, rallying 8% this month and 28% this year.

Both gold and bitcoin are benefiting from the weakness of the U.S. dollar, Wald continued. Michael Binger, president of Gradient Investments, concurred with Wald about the dollar but he favors gold over bitcoin.

Binger opined: “Between the two I would really lean on the gold side here. When you think about it, it is really a Goldilocks environment for gold investors right now. I mean, you have a weak U.S. dollar, you have negative real interest rates. All of this is based on the prospect of rising inflation.” While agreeing with the Oppenheimer analyst that bitcoin is a momentum play, Binger still believes that it is not a “valid currency yet.”

What do you think about the Oppenheimer analyst’s view? Let us know in the comments section below.

This week, the United States Senate introduced another stimulus package that would add more than $1 trillion to the Fed’s...