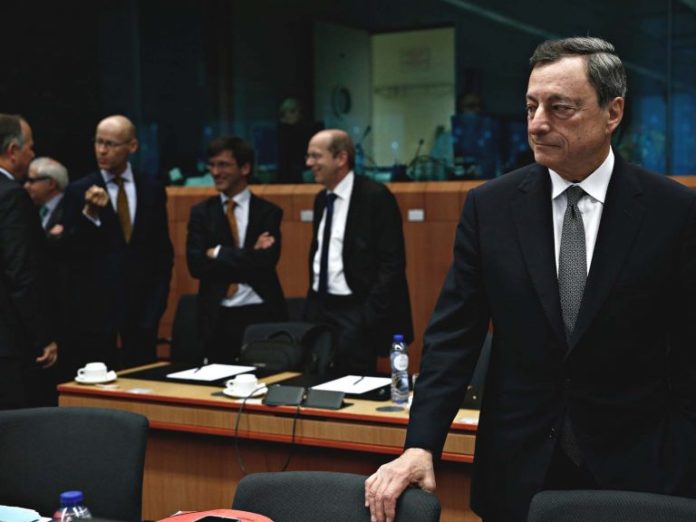 Preparing for a change at the top, the European Central Bank has decided to keep interest rates on hold and at their all-time lows. Mario Draghi, who had his last monetary policy meeting as president of the ECB, is leaving after an eight-year term during which key rates were never raised. At the subsequent press conference, Draghi defended the bank’s monetary policy which has received a serious amount of criticism from various corners of Europe.

Europe’s central bank announced Thursday that the benchmark borrowing rate remains at 0% and the main deposit rate, the one banks face when leaving money at the ECB, stays at -0.5%. The record low was approved in September when the financial institution also decided to restart its stimulus program. In November, the bank will begin purchasing 20 billion euros’ worth of bonds a month and the quantitative easing is an open-ended commitment. Within the previous asset purchase program, which ended in December 2018, ECB spent over €2.6 trillion. The bank first started buying bonds in early 2015. ECB expects key interest rates to remain at their present or even lower levels until inflation in the common currency area moves closer to 2%. Despite all efforts in that direction, the indicator has persistently remained well below the target, reaching a record low of 0% in the spring of 2016. But “Super Mario,” whose fans believe he has saved Europe’s monetary union and avoided deflation, defended the bank’s current monetary policy. Improvements in the economy, he told journalists after the meeting, have more than offset the side effects of negative rates.

Draghi also revealed that today’s decision has been approved unanimously, in contrast with last month’s policy change, when several governors opposed the restarting of the bond-buying program. The outgoing head of the ECB insisted that was not a problem. All central banks have disagreements when monetary policy issues are discussed which is part of the ongoing debate, he noted to the media in Frankfurt. However, ECB’s loose monetary policy has been criticized by leading financial institutions. “They’ve already turned on the money tap to the limit,” Deutsche Bank CEO Christian Sewing recently stated, stressing that very few economists believe cheaper money would have any positive effect. A couple of months ago, the head of another large European bank, ING CEO Ralph Hamers, warned of the risks lurking behind central bank money printing. Injecting more cheap money won’t bolster weak confidence, Hamers told reporters, adding that he doesn’t think QE is the right recipe as there is no shortage of money. During his Q&A session today, Mario Draghi also addressed the IMF’s concerns about long-term negative rates, emphasizing that the ECB is keeping an eye on these risks.

Germany Drags the Eurozone Toward Stagnation

“From all viewpoints,” an economic downturn is the main risk, Draghi warned. And there are mounting signs that Germany, where QE has been challenged in courts as a form of central bank financing of government and negative interest rates have been blamed for depleting savings, is on the doorstep of a crisis. Its industry is suffering from uncertainty surrounding global trade and Brexit. In October, for the first time in six years, German companies cut more jobs than they created, the Guardian reported. The prolonged decline in German output and exports means the Federal Republic is heading into recession, dragging the whole Eurozone toward stagnation. Mario Draghi has been calling on European governments to spend more money in order to stimulate the economy and avoid the crisis. In that, he has been joined by his successor, Christine Lagarde, who until last month was managing the International Monetary Fund and will assume the office of President of the European Central Bank on November 1.

What distinguishes the two, at least on first glance, is their attitude towards decentralized digital money. While in May Draghi insisted that “Bitcoins or anything like that are not really currencies,” Lagarde views cryptocurrencies, where opportunities for saving are available, as disruptors that are having an impact on incumbents, or the commercial banks. In the current environment, she believes that:

Central banks and supervisors need to ensure the safety of the financial sector, but also to be open to the opportunities provided by change.

“In the case of new technologies – including digital currencies – that means being alert to risks in terms of financial stability, privacy or criminal activities, and ensuring appropriate regulation is in place to steer technology towards the public good. But it also means recognizing the wider social benefits from innovation and allowing them space to develop,” Lagarde said in a statement to the Economic and Monetary Affairs Committee of the European Parliament in September.

Do you expect to see a change in the ECB policy toward cryptocurrencies under its new president? Tell us in the comments section below.