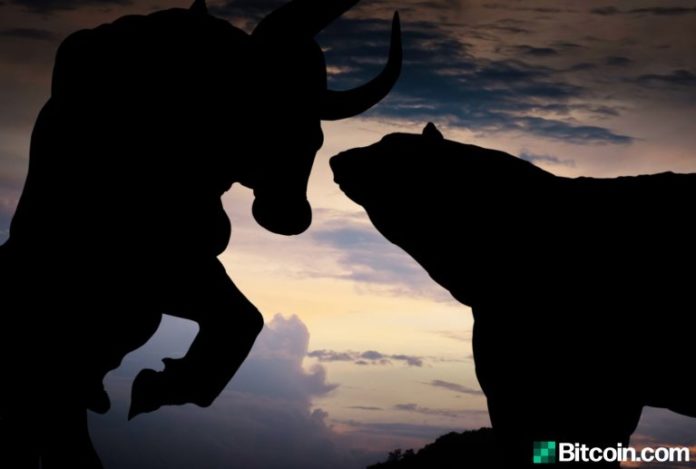 Digital currency prices have slumped again as the entire crypto market capitalization has dropped below $200 billion. At press time, most of the top digital assets are down a few percentages after gathering some gains over the last few days. With multiple coins getting rejected after trying to surpass upper resistance, skeptics think crypto prices could see further declines. However, BTC/USD long positions have spiked considerably despite market uncertainty.

The cryptocurrency market cap on Wednesday is hovering around $197 billion and there’s roughly $58.9 billion in 24-hour global trade volume today. A few days ago cryptocurrency traders attempted to push prices northbound but after being crushed by upper resistance, crypto asset values went south. For instance, on December 9, BTC prices shot up to $7,600 but since subsided and each coin is now swapping for $7,230 per BTC. The heavily correlated markets below BTC followed the coin’s downward path and the entire market valuation of all 3,000+ assets slid significantly. Currently, BTC is down 0.96% today and has an overall market cap of roughly $130 billion. The second largest market valuation is held by ETH as each coin is trading for $145 today. ETH is down 0.39% on Wednesday and 2.8% for the entire week. This is followed by XRP markets which are up 0.48% today and 0.92% over the last seven days. With a $9.63 billion market valuation, each XRP is currently swapping for $0.22 per coin. Tether (USDT) holds the fourth largest market cap and is the most dominant stablecoin paired with most coins in the cryptoconomy. At press time, statistics from coinlib.io show USDT captures roughly two thirds of the global crypto volume.

Bitcoin cash (BCH) markets have lost a few percentages over the last few days and BCH holds the fifth largest market valuation. Right now each BCH is swapping for $206 per coin and markets are up +0.47% today but 3.8% down for the week. Bitcoin cash has an overall market valuation of around $3.76 billion and there’s $1.1 million in global BCH trades today.

The top pair traded with BCH is USDT which commands 56.4% of all BCH trades. This is followed by BTC (30.5%), USD (8.3%), ETH (2.6%), and KRW (0.84%) pairs. The BCH-based stablecoin honestcoin (HUSD) represents the sixth most traded pair with BCH on Wednesday as the stablecoin has been gathering steam. This week Fxstreet analyst John Isige said that even though the general market trend has been sideways, “[BCH] is turning bullish amid expanding volatility.” Isige highlights that BCH markets have been consistently settling above the moving averages.

“The RSI and the MACD suggests that the sideways trading could last through the next sessions on Monday,” Isige’s analysis suggested. “However, a break above the 23.6% Fib level taken between the last swing high of $308.13 to a swing low of $198.61 will ignite the much-awaited rally above $250 and heading to $300.”

On December 10, Shark Tank star and owner of the National Basketball Association’s Dallas Mavericks, Mark Cuban, explained that he doesn’t believe BTC has a chance to become a reliable currency. In an email with columnist Benjamin Pirus, Cuban told the reporter there is “no chance.” “Not because it can’t work technically, although there are challenges, it could, but rather because it’s too difficult to use, too easy to hack, way too easy to lose, too hard to understand, too hard to assess value,” Cuban told Pirus.

“It is a collectible. If you consider art or gold a viable stable financial asset, then yes. It can be.” Despite Cuban’s opinion, as of August 2019, the Dallas Mavericks accept BTC for payments for merchandise and tickets.

A few weeks ago, crypto market observers thought that China’s President Xi Jinping pushed a lot of optimism into crypto markets after blessing blockchain technology in October. Crypto prices did spike after the announcement but quickly went southbound about a week or so later. Crypto analysts believe President Xi Jinping’s blockchain talk was a false positive for crypto markets and digital asset prices have been removed from the hype. “China’s firm stances on blockchain were initially a positive driver,” said John Iadeluca the founder and CEO of multi-strategy fund Banz Capital on Monday. “[Regrettably] the Asian market apprehension increased once the state media clarified they didn’t mean cryptocurrency in that stance,” Iadeluca added.

On December 4, U.S.-based stock brokerage Charles Schwab published a report that shows the publicly tradable bitcoin trust fund managed by Grayscale Investments is a top five equity investment held by millennials. Grayscale’s Bitcoin Trust joins popular equity holdings like Facebook, Amazon, Tesla, Netflix, Microsoft, and Apple. “Millennials continued to allocate more to ETFs (24%) than did Gen X (20%) and Baby Boomers (17%), and they also held more cash (16%) than other generations (Gen X had 14% followed by Boomers at 12%).” The report shows that Grayscale’s Bitcoin Trust was held by 1.84% of all the participants Charles Schwab surveyed.

At the moment people are still uncertain of what’s in store for the cryptoconomy and market prices. However, there are a lot of traders who are long on BTC and BTC/USD long positions have skyrocketed since November 22. Disclaimer: Price articles and market updates are intended for informational purposes only and should not be considered as trading advice. Neither Bitcoin.com nor the author is responsible for any losses or gains, as the ultimate decision to conduct a trade is made by the reader. Always remember that only those in possession of the private keys are in control of the “money.” Cryptocurrency prices referenced in this article were recorded at 10:45 am EST on December 11, 2019.

Twitter and Square CEO, Jack Dorsey, has just announced that Twitter is funding a small independent team to develop an open and...