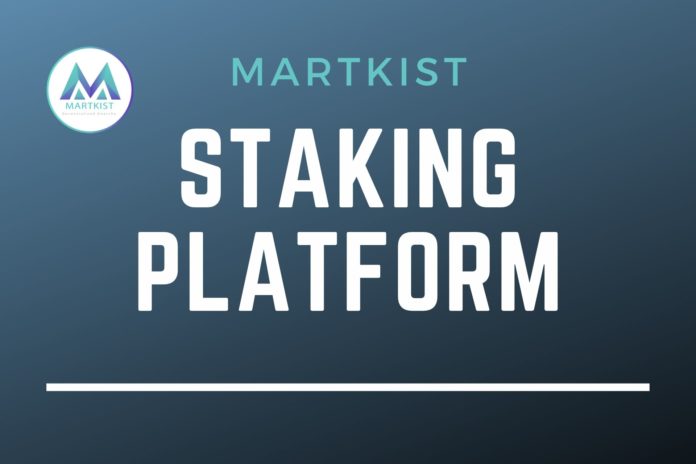 Martkist had recently unveiled their token wrapping platform, Altwrap, which converts the MARTK to WMARTK tokens. This conversion or wrapping provides users with the freedom to invest and engage with other ETH based projects.

Altwrap allowed the users to convert the wrapped tokens to other crypto assets and then trade in the best option. Wrapped tokens provide the users with various accessible methodologies to participate and benefit from such activities.

Now that Altwrap is in full swing, the developers have enabled staking, adding another aspect of services on the platform. Staking with WMARTK is to be done on a different platform than MARTK, and the returns for the same will also depend on WMARTK-related market positioning and performance.

Staking a coin is not new to the world of cryptocurrency. It is an excellent method to earn rewards and trust the system to harness better returns. However, with Martkist, staking has taken a different and innovative route to bring a tiered staking structure to the users.

With WMARTK, all three tiers of staking structure have different limits. This is pertinent in terms of the collateral, reward generation, ROI, and maturity. As a basic principle, with an increase in these terms, the initial investment factors, the rewards also increase. In other words, if a user leverages the return structure of tier 3 staking, the returns are way more than tier 1 and 2.

For Tier 1, the minimum collateral is 1000 WMARTK tokens. These tokens are essential to begin staking and earn 0.33 tokens per day. The minimum staking period is 30 days, which garners an ROI of 12% for the users. After maturity, either the user can claim the stake or increase it as needed.

With Tier 2 staking, the minimum collateral is 9000 tokens and the maximum period to stake is 90 days. For these 90 days, the users can expect a return of 4.44 per day, giving an ROI of 18%. Such a high return figure gives the users an incentive to invest and get access to a lucrative platform.

Lastly, there is a third tier that proffers the best kind of returns to the users to the tune of 50% ROI on the collateral of 18000 tokens. However, the staking period here is 365 days, and the reward per day is 24.66 per day.

This structure is only at its nascent stage, and the Martkist community will benefit from a lot of features and services from the initial functions. Down the line, there are various additional features that will be integrated for the benefit of the users.

Altwrap is a Martkist’s proprietary Dapp that enables conversion. The users can wrap the MARTK coin to any other type of ERC20 token. More importantly, Altwrap allows interoperability between the blockchains, enhancing the engagement levels.

Not only from MARTK to WMARTK, but the users can convert the WMARTK tokens to any other ERC 20 token from the same Dapp. This makes Altwrap a versatile system to help the community to gain the real benefits of decentralization and universalization of the cryptocurrency.

To sum it up

Staking is often considered a risky proposition as the basic mechanism depends on the market forces and the volatility. But with Martkist, the users are getting returns of 12 to 50%, which cements the coin’s position to become an effective medium for earning passive income.