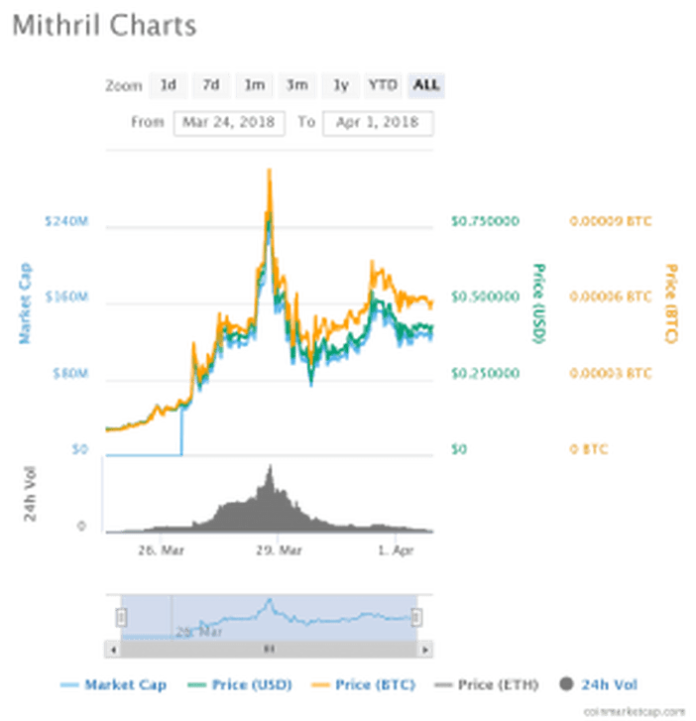 Mithril (MITH) – With Bitcoin taking up 45% dominance in the current $270 billion dollar market cap, many experts are quick to call this a small consolidation occurring in during a cryptocurrency bull run. The market is in the green today as it has recovered from the past few days of rapid down cline. Coins like Ontology (ONT) and Mithril (MITH) are some of the weeks best performers.

As of now, Mithril isn’t a well known cryptocurrency to the masses – but after soaring over 100% the other day, things are starting to look up, literally. This is one of the most intense uptrends we have seen in a while as the value of the coin has increased 477% in just one week. Recently listed on digital currency exchange platform, OKEx, this cryptocurrency promises to attract the younger generation as it sets out to innovate social media as we know it today. While most cryptocurrencies are plunging to threatening lows, this coin has amazingly gone from $0.09 to $0.79 in just one week. But what is even more eyebrow raising is that in the past 24 hours, the coin is down 50%. After trading at a new high of $0.80 yesterday the MITH token has quickly declined in price and consolidated at $0.33 before moving back up to low $0.40 range.

Mithril is a decentralized social media platform that is currently integrating into new and existing social media networks to reward content creators. Mithril has its own cryptocurrency coin (ERC-20 based token established by Ethereum) which can be earned through social mining across social networks – MITH. Mithril sets out to be the “future of social networks” by allowing content creators, like live-streamers and bloggers, to benefit from their work in ways that only blockchain can achieve. Anyone from popular celebrities to everyday joe’s can benefit and participate through social mining.

Mithril ensures safe and secure transactions for all participants with its decentralized data storage platform which can record transactions between parties very efficiently. MITH was primarily launched as a utility token on social media platform, Lit, which is an innovative app for an instant messaging and story feeds. Lit uses social mining of MITH to reward users for contributing their personal content to the network. Lit is set to seamlessly integrate into the social media market on a major scale to help users actually monetize their personal content. Users will be able to spend their MITH tokens across the MITH application ecosystem.

With over 2.5 billion people in the world using social tools and networks to establish connections, the frequent sharing life is considered normal and has become a major part of how we deal with things. Stories are one of the most popular social trends going on right now and the app, Lit, is basically combing this new tech with the even newer tech of blockchains and cryptocurrencies. As users share stories via Lit, they will be rewarded with Mithril tokens based on the impact that their story influences the network.

Social Mining is a new concept that is integral to the Mithril ecosystem. As users distribute valuable content on the network, MITH is earned via Social Mining. The rewards are directly linked to how much influence their content gives and how successful one is as a contributor to the network. The more network value a user brings to the platform, the more MITH they receive.

Once there is more network and user adoption behind the Mithril platform, the value will grow. Also by developing a system of rewards and benefits, and by enabling mobile wallets to hold MITH, along with integration with the Lit app, this project could potentially be huge. Lit acts as the cornerstone for future digital and social media networks.

With the cryptocurrency market as a whole plunging below a $300 billion market cap, Bitcoin is currently trading below $8,000. Yesterday was a great day for Mithril, as the cryptocurrency rose over 70% in value but as of now the momentum is headed downwards – something tat is expected after a week long 500% percent bull run. This coin quickly found a home in the top 100 market cap.

Jeff Huang, Founder of Mithril, is an early adopter of all new technologies ranging from the tech industry to music and entertainment. With a credible background in mobile app networking – as seen with his app Media 17 – Haung’s Mithril is set for explosion, as price spikes have already told us. With a strong developing team, Mithril’s plan of social media integration seems possible.

As the weekend comes to an end, it is difficult to know what will happen leading into April. Many believe this to be the last big crash before the inevitable bull run, while others will tell you they still have no idea what Bitcoin is. One thing is for certain: Mithril has seen an increase of over 450% in just one week but has since fallen – as is true with cryptocurrencies, there is great opportunity and there is risk.